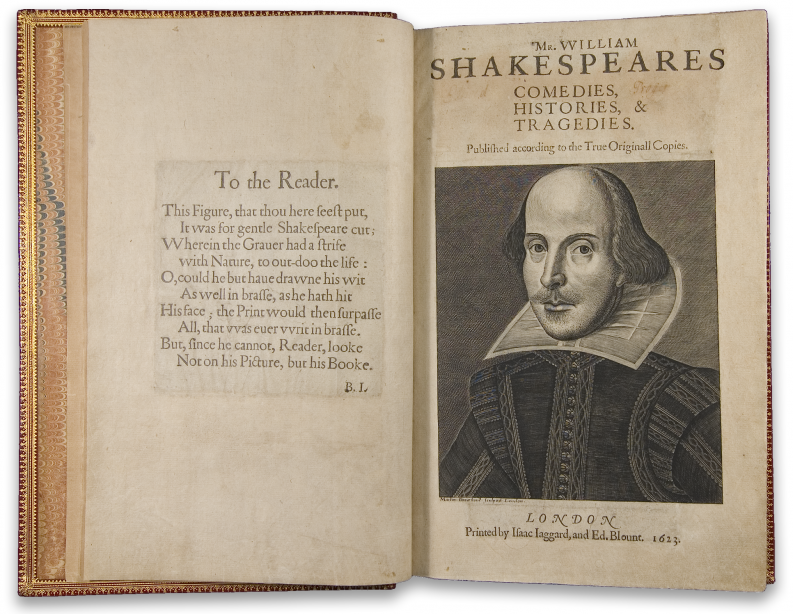 Research reveals that the 1622 catalogue for the Frankfurt Book Fair included the announcement of the publication of Shakespeare’s First Folio.

Although the Frankfurt Book Fair’s modern incarnation as the world’s largest trade fair for books began in 1949, its history goes back more than five hundred years. And indeed, up until the end of the 17th century (when it was eclipsed by Leipzig) it was considered the preeminent European book fair.

And one interesting fact that illustrates the fair’s early importance is this: the 1622 catalog for the fair included the announcement of the publication of Shakespeare’s First Folio.

The first printing was no more than 750 copies. And of those, two thirds have not survived. There are around 244 copies in existence, most of them incomplete.

But without the First Folio, published just seven years after Shakespeare’s death, eighteen of the plays, including such undisputed masterpieces as Macbeth, Measure for Measure, Antony and Cleopatra, Julius Caesar, Twelfth Night, and The Tempest would have disappeared.

As Andreas Mays noted in The Millionaire and The Bard: Henry Folger’s Obsessive Hunt for Shakespeare’s First Folio (Simon & Schuster), a fascinating look at the history of the Folio and of Henry Folger himself, whose drive to own as many first Folios as possible led to the creation of the world-renowned Folger Library in Washington, D.C.:

The Shakespeare folio was announced to the trade in advance of its publication. The Frankfurt Book Fair was the publishing industry’s largest event of the year, and in 1622, John Bill, printer to the King of England, issued an English translation of the Frankfurt catalogue as well as a list of books printed in English. It contained this modest announcement: ‘Playes, written by M. William Shakespeare, all in one volume, printed by Isaack Isaggard, in fol.’ with an estimated publication date between April and October of 1622.

Of course, even then, pub dates were made to be broken. The first printing had a publication date of 1623, and the earliest record of a retail purchase was December 5, 1623, to one Sir Edward Dering, whose account book shows that on that date he attended a play which cost one shilling, six denarii, and that he also purchased “two volumes of Shakespear’s playes” for two pounds.

Of course today, as Mays wrote, the Folio “…is the most valuable book in the world. And, after the King James Bible, the most important. In October 2001, one of the First Folios sold at Christies for more than six million dollars.”

And yes, it was announced at Frankfurt. What future masterpieces will be discovered this year?