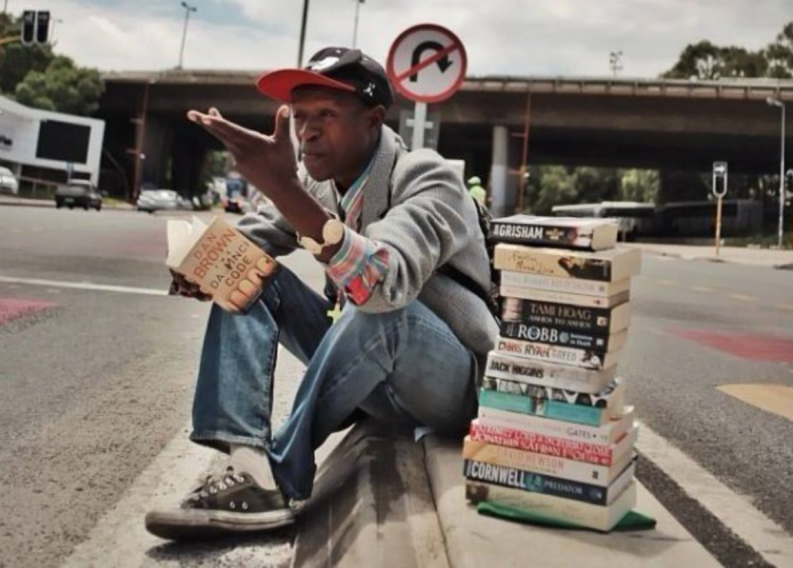 Johannesburg’s Philani Dladli was homeless when he decided to sell books he found and read, offering them on a sliding price scale based on his own review.

Philani Dladli, is known in Johannesburg, South Africa as the “Pavement Bookworm” and his story is remarkable. As a young homeless, man he took his love of books and used it in a unique way: to help himself and those around him. His passion for the literary word started as a child growing up in KwaZulu Natal. But with his move to Johannesburg for work, he began taking drugs. Dladla he recounted his story for One.com:

“I left my job and couldn’t afford rent anymore – I lost everything. While living on the streets I noticed how many beggars there were getting money for nothing on street corners. I thought I could be different and actually give people something worthwhile – like a book or book review – in exchange for money.”

So, that is what he did: Dladli would read a book and then offer the book along with a detailed review to others on a sliding pay scale based on how much he enjoyed said book. The scale went “…from 10 South African rand (less than one dollar) for those he didn’t enjoy, up to 80 rand ($6) for his favorites.” This little business became a hit.

Reading also helped him change his own life:

“With some self-motivation and a lot of self-help books, I made the decision to stop taking drugs. But while I was helping myself I also wanted to help the other people I had been living on the streets with. So I started using the money I got from selling books to buy everyone soup and bread everyday instead of spending that money on drugs. Seeing their smiles motivated me to keep using the little I had to spread happiness. From that point on, I knew I never wanted to go back to being a drug addict.”

With this new life ahead of him, he kept going. He began a “Book Reader’s Club” at a local park where underprivileged children hung out waiting for their parent’s to finish work.

“I give them books on the condition that they come back and tell me what they learnt from reading it. There are some kids who take books and never come back, but I don’t let that dampen my spirit, because I know there are many more who love to read and who will use books as weapons to fight poverty.

“Too many kids lose their way after high school – many of them turn to drugs, alcohol and crime. I want to change that. We don’t just read together – we talk about our hopes, dreams and challenges and support each other in achieving them.”