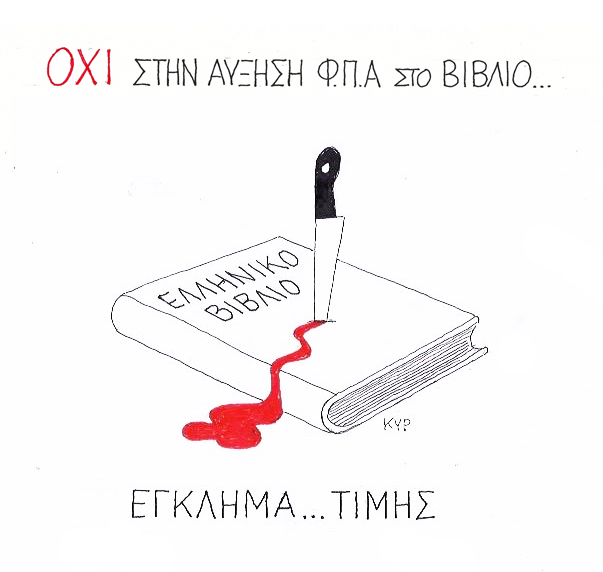 Greek publishers and booksellers across the board are suffering.

In Greece, publishers have stopped printing and bookstore sales have dropped of as much as 90% since new capital controls went into effect in June. If anything, the past six months in Greece have been the opposite of boring to outside observers. Ever since left-wing party Syriza rose to power in January 2015, the country’s clash with the EU has read like a dramatic script that delves into dystopia, a tragic tale in which Greece is portrayed either as the hapless victim or the prime culprit, depending which side you are on.

Only the situation has never read like a script to those of us living in Greece; it has always felt like reality or, to go back to the film analogy, like a succession of dangerous stunts in a film without direction.

When the government imposed capital controls and a bank holiday on June 28 in order to restrict the movement of capital following the call for a referendum, even Syriza’s firm supporters felt their world falling to pieces. A daily cash withdrawal limit of 60 euros was imposed, and individuals and businesses were banned from making online transfers abroad.

Even though individuals can now withdraw their allocated 420 euro per week in one go, online transfers abroad are still not allowed with individuals and businesses having to apply to their bank’s special committees to assess their applications.

To say that the impact of the capital controls and extended bank holiday has been disastrous for the economy would be an understatement. From June 28 until today, the turnover for three out of ten Greek businesses has dropped by 70% and overall consumption by 50%, according to The Hellenic Confederation of Professionals, Craftsmen & Merchants.

The impact on Greek publishing has been just as dramatic. According to Greek literary magazine, O Anagnostis, the turnover for Greek bookshops has fallen by 50–80%. Publishers report that their turnover slipped by 80% and their production by almost 90% in the month of July.

In Vima newspaper, Yiannis Konstantopoulos, president of the Board of Directors for the Association of Greek Publishers and Booksellers (ENELVI) and CEO for Minoas Publishing, revealed that book printing came to a complete stop in July. Paper and ink cartridges are imported, and domestic suppliers demand up-front cash payments, “all orders for printing paper were canceled … Many publishers have sent their employees on forced holidays … I fear that those publishers, who will not go into insolvency now, will do that in due course.” ENELVI is also protesting a government proposal to increase VAT on books, which is also likely to cut sales even further.

On July 12, ENELVI issued a statement to all relevant ministries in Greece asking them “to take some basic … measures to ensure that importing printing paper is made easier for Greek publishers (as stock levels are very low) … and that the ban on transferring money abroad is lifted so that publishers can honor their financial obligations.”

Giota Kritseli, publisher at Kichli, said: “If you take into account the 80% fall in our turnover in July and the fact that our earnings have been in steady decline since January, the situation can only be described as dramatic. In essence, having generated no revenue from the end of June, we have only been incurring debts. Apart from our running expenses we’ve also had to deal with an accumulation of mainly bad checks (due to the capital controls) and the payment of our tax bills for next year. It is no wonder many businesses have been unable to make ends meet in these conditions.”

Chrysa Georgakopoulou, publisher of highly-respected Scripta Publications, which closed down in the midst of the capital control chaos, was quick to point out that it was not only the recent capital controls and extended bank holiday that brought Scripta’s demise. The company had been facing financial difficulties for the last three years. “Books were never a first priority for Greeks,” she wrote in a moving farewell letter to colleagues, associates and friends. “It was always the very few that sustained Greek publishing in its semi-comatose state.”

Soti Triantafillou, one of Greece’s most beloved authors and editor at Patakis echoed Georgakopoulou’s words arguing that the market needs “stability, a business-friendly social framework, sobriety and some sort of collective peace of mind (to survive). The Greek readership does not have any of these. It’s a turbulent time for us all.”

It remains unclear when the vicious circle of supply chain problems will be broken and the ban on online transfers abroad will be lifted. Until then, Greek publishers will have to rely on their own devices and their foreign clients’ understanding, patience and goodwill. Luckily, there has been plenty of that throughout this difficult time.

Amy Spangler of the Anatolialit Agency in Turkey, who has been working closely with Greek publishers for many years now, said in heartfelt statement: “Our hearts and minds are with the people of Greece, including of course our publishing colleagues there, as they undergo this trying period. Working in a country that often experiences serious currency fluctuations, and the repercussions thereof, we can empathize to a point, although the situation in Greece is on an entirely different level of course. While it might be a bit nerve-wracking not knowing when we’re going to get paid by Greek publishers, there is really nothing we can do but be patient, and we have resigned ourselves to that. Thankfully we work with a sub-agent who keeps us updated, and whom we know we can depend upon to do everything possible to secure payments. But right now, it befalls us to express our solidarity with our colleagues by being patient. Books fill the mind but not the belly, frankly, and so I can understand, given the current the situation, if a rights payment is not a publisher’s priority. And our priority should be doing our part to help Greece weather this storm by, at the very least, showing understanding for a situation that is completely beyond the people’s control.”