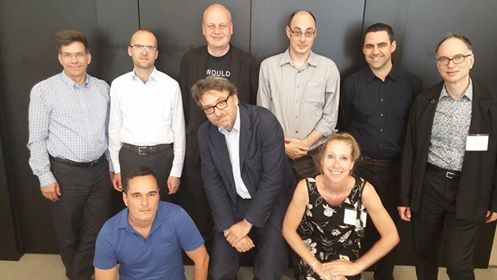 International nonfiction and philosophy publishers discuss what works in their markets at a series of meetings in Germany. Book fairs mostly revolve around one-to one meetings, and the exchange between colleagues is bilateral at most. But what happens when you mix it up and send a group of seven international publishing professionals on a road trip through Germany to meet with their German counterparts?

The Popularity of Philosophy in Germany

One surprising point of discussion that came up several times on the trip was the growing popularity of philosophy among German readers, not just academics. Today, there are three magazines in Germany that focus on this topic, along with a radio show. Also gaining in popularity in several cities are philosophy dinners, explained Wolfram Ellenberger, publisher and founder of Philosophie Magazine. Germans host dinner parties that focus on a theme and pose questions featured in the magazine’s issues.

Giovanni Carletti, Publisher of Laterza was “surprised by the organization and means available to German publishers, compared to what we have in our country. For example, it seems like in Germany there is still a public debate on the press and on the media that is capable to reach a wide audience and to influence readers.” The group thought that a good example of that was proQM, a curated bookstore in Berlin specializing in urbanization, politics, pop culture, economical criticism, architecture, design, art, and philosophy. Mikhail Kotomin, publisher of Russia’s Ad Marginem, added: “I am very much impressed with Philosophie Magazine” which has a print run of 100,000 copies and poses a different lead question in every edition of their issue and articles are focusing on that particular questions.

The commercial success of Philosophie Magazine and proQM show that German readers are more interested in philosophy than they were five years ago. There is also Philosophy Festival in Cologne, an eight-day event attended by almost 12,000 visitors, and for 20 euros visitors can attend panel discussions on philosophy.

The challenge for publishers is to convince scholars to write for the general audience — a topic all too familiar to this group of international nonfiction publishers. Ken Wissoker, Editorial Director at Duke University Press agreed that academics need to be taught to write for a wider audience. It sometimes takes many years and a lot of rephrasing to publish an academic’s work. German publishers also struggle with the same issue. Academics play a dual role as both the writers and consumers of many philosophy books, and marketing books like these means tapping into the academic community. Wissoker uses social media to reach out to the press’s network of academic authors and readers and to the larger scholarly community. “I try not to be too directly promotional, but I participate a lot and I’m very attentive to what goes on — from people’s excitement about particular ideas or authors to the struggle of writers trying to get another chapter done. Much of the word about a book coming out now happens that way. Authors post their covers on Facebook, then write about their excitement of receiving the advance copies. Their friends like it, say they are preordering and sometimes share the word. An ad is nice but getting the word spread by people who are calling it to their friends’ attention is the best.”

Marc Lowenthal, editor at MIT Press agrees with that strategy: “Our tweets and posts aren’t all focused solely on ourselves and reviews of our books, but on the publishing arena in general.” MIT Press has done several week-long “Share the Knowledge” sales over the last few years, in which they offer 50% off every book and ebook on their website. The sale’s popularity was heightened by the academic community spreading the word online, which happened quite organically. “Lots of our authors tweeted the sale to people they knew, who in turn tweeted it. Lots of people ordering books through the sale would then tweet or post pictures of all the books that they bought when they arrived, etc. The whole thing spread online in a remarkable manner,” said Lowenthal.

Wissoker had a similar story to MIT Press, which has almost 18,000 followers on Twitter. “Already two years ago when we had a big spring sale, we tracked sales day by day with Twitter activity. The sale generated three or four times the revenue that any of our older ‘by mail’ sales had produced. I have about 3,000 followers, but my ‘last chance’ tweets as the sale ended were picked up and retweeted by then pop music critic at the Los Angeles Times. We got a huge rush of last-minute shopping!”

For Niels Cornelissen, Publisher at Uitgeverij Boom in Holland, the marketing campaign also involves collecting email addresses for direct marketing. “We publish a free ebook every year with chapters from our books (and also books by some other publishing houses). Usually, we get about 2,000 downloads. The most successful one was about 4,000. In this way, I think we’ve already doubled the address list for our mailings.”

In Italy, Editoria Laterza recently launched a new streaming service to foster an online forum for authors and readers. Carletti explains: “The idea is to organize, through the web, groups of readers and authors, to mix them to comment and discuss books and ideas. It could be interesting for students, for example, to have the opportunity to get to know each other on a more personal level.”

In Russia, social media is a marketing tool mostly used by bookstores. “It’s usually used by independent bookshops. For instance, a small bookshop around 60 square meters, Falanster, has an account at VKONTAKTE [a Russian social network] with more than 25,000 subscribers. And this account could be sometimes more effective than the shop itself,” explained Kotomin.

The Networking Aspect Counts Most

“The greatest takeaway from this trip was the opportunity to exchange ideas and prospects with German editors, and most importantly, with fellow participants. It was important to be aware of what is happening around the globe, with different problems of the market and with new perspectives,” said Carletti.

Goddard seconded this: “It was interesting to see the many similarities and overlap between my approach and those of the other group members, and German publishers, but where, for all our common interests and shared outlook, they differed from me and achieved dissimilar results, sometimes even with the same authors.” The group also discovered publishing houses they were not familiar with. “Matthes and Seitz struck me as the most singularly German of the lot, with no points of reference or comparison in our market,” said Goddard. Lowenthal was surprised that he hadn’t previously known Matthes & Seitz, given how much overlap there is with their list and his own personal interests.

Participants also discussed the challenges of translating into English and other languages, the economy of the countries they are from, the role of the backlist, and the environment. Carletti was surprised by the reality that most of this public debate in Germany is a national one and, in some way, parochial. “Due to the moment in which we are living, I was expecting more on politics and economics, more on gender and post-colonial issues,” he noted.

Bringing together this group of international publishing intellectuals proved the high demand for an exchange that goes beyond the 30-minute meeting at a book fair. You can learn more and follow developments for the event on Tumblr.

“It made a huge difference to meet publishers (even ones that I had met before at the Book Fair) in their offices and get a sense of their neighborhood, their history (the Suhrkamp move from Frankfurt to Berlin), and to meet editors in addition to rights people. It was also wonderful to travel with international editors — to see which German authors were important in Italy or the Netherlands — which gave me different ideas of what we might translate. I also learned about the particular intellectual moment in Germany in a way that I would not have been able to grasp without our conversations,” concluded Wissoker.

With special thanks to the German Foreign Office for funding the trip.