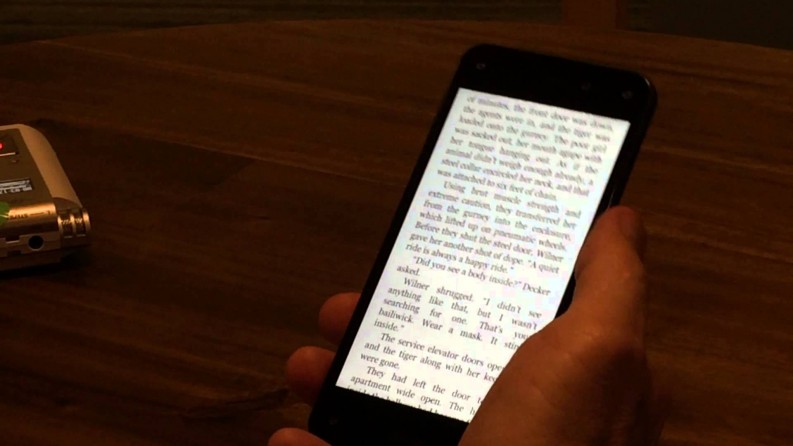 The number of people reading on a phone is up 14% in the first quarter of 2015, according to Nielsen.

Reading on mobile phones is on the rise and increasingly publishers are designing and marketing for a mobile reading experience, writes the WSJ.

At the Wall Street Journal, Jennifer Maloney lays out the case: “It’s not the e-reader that will be driving future book sales, it’s the phone.”

Take the case of Andrew Vestal, who found, much to his surprise, that the best way to find the time to read in between work and taking care of his baby daughter was in short bursts on the iPhone he always had at hand:

“I wanted reading to be part of my life,” he told the Journal. “If I waited for the kind of time I used to have – sitting down for five hours – I wouldn’t read at all.”

And Vestal is not alone. The WSJ reports that according to a Nielsen survey of 2,000 people done last December, nearly 54% of buyers of ebooks reported using smartphones to read their books at least part of the time, up from 24% in 2012.

At the same time, the number of people who use their e-readers the majority of the time dropped from 50% to 32% over the same period. Even the use of tablets has dropped.

And so an increase of phone reading is forcing publishers to take a second look at how books are “designed, market, and sold with smaller screens in mind.”

One factor driving the increase in phone reading is simply that of convenience. You might not always have a book or e-reader or tablet with you, but if you’re like 64% of Americans – you’ve got a smartphone. By 2019, that’s expected to increase to 80.8.

And, as William Van Lancker, co-founder and chief product officer of Oyster said, “The best device to read on is the one you have with you. It requires no planning. My bookshelf at home isn’t any good to me when I’m at the park.”

And so, as Maloney writes:

“To engage readers, publishers are now experimenting with ways to make the mobile-reading experience better. They are designing book jackets with smartphone screens in mind. (Handwritten scripts or small fonts may not be legible.) They are customizing their marketing materials—email blasts, Facebook posts and websites—to be read on phones. And some are trying to catch people on the go, offering free access to e-books in airports, hotels and trains.”

“How do I serve something up to somebody who perhaps wasn’t thinking about a book two minutes ago? The read-anywhere option is amazing. It’s an obligation for us as publishers to find those people.”