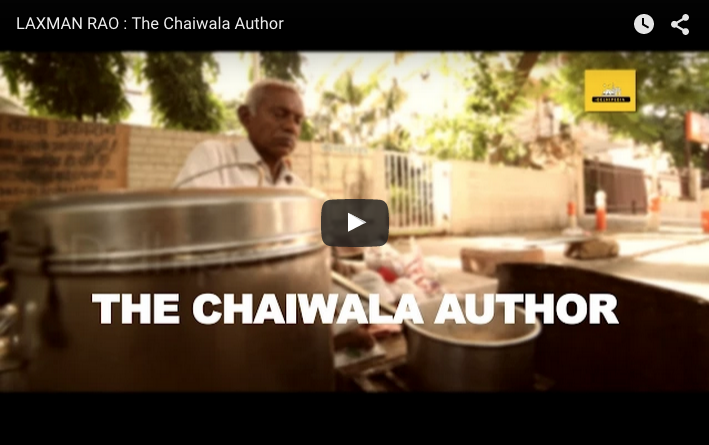 A selection of Laxman Rao’s novels.

The BBC notes that Laxman Rao, “the most famous tea seller in the Indian capital, Delhi,” has found success on Amazon as the author of 24 Hindi-language novels.

The BBC reports that Laxman Rao, “the most famous tea seller in the Indian capital, Delhi,” has found notable success on Amazon as the author of 24 Hindi-language novels.

The son of a farmer, Rao left his village, located in the western state of Maharshtra, to move to Delhi in 1975 to “fulfill his dream of becoming a writer.”

Rao worked various jobs — construction worker, dishwasher, paan and cigarette seller — before finally opening his tea stall, but never gave up on his dream of becoming a published author. Unfortunately, “all his meetings with publishers ended in disappointment as nobody was willing to bet their money on a book written by a roadside vendor.”

Eventually Rao saved up enough money to be able to publish his first novel himself in 1979. He told the BBC’s Anasuya Basu that “Publishers have a highbrow attitude towards people like us and want money to publish our work. I had no money to spare and, therefore, decided to start my own publishing house.”

Basu said of his books that “turbulent lives, the struggle to rise above grinding poverty and the ordinary pleasures of life are the themes on which Mr. Rao’s novels, political essays and plays are based.”

His best-selling novel Ramdas, first published in 1992, “explores the complexities of the teacher-student relationship through the story of a young, wayward student from Mr. Rao’s village who drowned in a river.”

Now in its third edition, Ramdas has sold more than 4,000 copies.

His work has received notable recognition, including from Indian Prime Minister, Indira Gandhi.

“I met Mrs. Gandhi in May 1984 with two of my books. She really appreciated my work and encouraged me to write more. I expressed my wish to write a book on her but she insisted that the book should be on her work rather than a commentary on her life. Enthused by this meeting, I wrote an essay on her tenure from 1969-1972 titled ‘Pradhan Mantri’ (Prime Minister) but she was shot dead before it could be published. After her death, I wrote a play based on her life and used the same title as the essay,” Mr Rao said.

Rao’s books are now available at online sites such as Amazon and Flipkart.

A spokesperson for Amazon India told the BBC, “His books are doing very well on our site. We are happy that authors like Mr. Rao have found a platform such as ours to sell his books.” As for Rao, who earns around $19 a day selling tea, he’s proud of what he’s accomplished:

“Authors pull different stunts to market their books, make movies and TV serials out of them. I am a simple man. I get all my mail at this footpath address. My books are available in school, college and university libraries in the city and I am often asked to lecture in various schools and colleges across the country. What more can a writer ask for?”