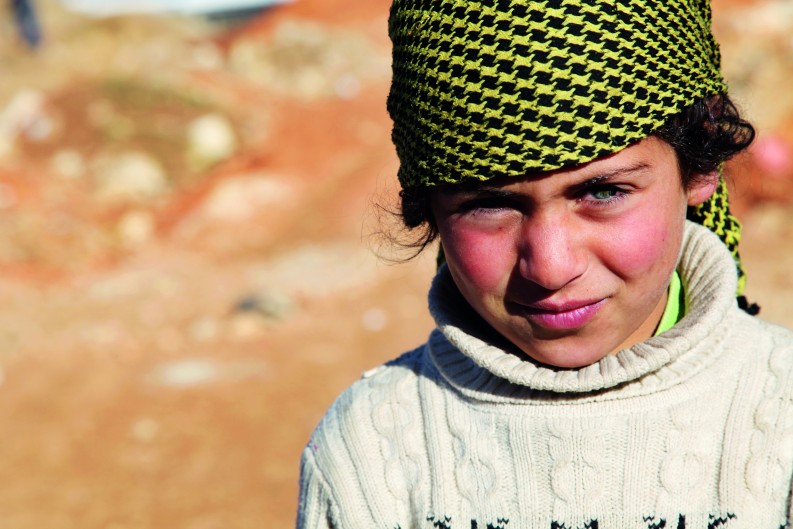 One of the Syrian chlidren who hopes to benefit from publication of the book.

Autumn is nearly upon us and it’s time for soup. Enter US publisher Interlink, which is launching a cookbook, Soup for Syria that contains a collection of recipes contributed by international chefs; moreover profits will be donated to help fund food relief efforts for Syrian refugees via the United Nations Refugee Agency, UNHCR. Lebanese food writer and photographer Barbara Abdeni Massaad lives in the Bekaa Valley close to where nearly half a million Syrian refugees subsist in camps. Unable to ignore the situation, Massaad writes in Soup for Syria’s introduction that she began to visit the refugee camps throughout last winter, each time filling her car trunk with food. “After several trips, I got to know many of the families…the more I visited—the more stories I heard and the more desperation I witnessed—the more heartbroken I became. I was determined to help no matter what. Are we not all human beings seeking the same things for our families—love, food and shelter?”

Already the author of three cookbooks, one of which was published by Interlink, Massaad enlisted the help of publisher Michel Moushabeck. Moushabeck decided to turn to celebrity chefs to get the visibility that would result in sales, hopefully creating an international movement to bring some relief to the now 4 million Syrian refugees in Lebanon and neighboring countries. Fortunately, internationally renowned chefs and cookbook authors such as Anthony Bourdain, Alice Waters, Paula Wolfert, Claudia Roden, Sami Tamimi and Yotam Ottolenghi responded positively, creating momentum so that a total of nearly 50 contributors gave recipes for soups that spanned the globe. Massaad is also a founding member of Slow Food Beirut and Slow Food’s founder, Carlo Petrini, wrote the book’s foreword.

Massaad and Moushabeck were able to pull together the project in less than a year, depending on good will from all involved: Massaad is donating her royalties, the contributors donated their recipes, the book was designed without charge, the web designer waived his fee and volunteers are running events in several countries. Once Moushabeck covers his cost of printing and production all the profits will be donated to UNHCR. Interlink’s business model, although Moushabeck says it is harder today than ever before, has always been to publish “money-making books to support our humanitarian ventures and important books that don’t necessarily sell enough copies to break even.”

But books that donate profits to humanitarian causes can be extremely successful as well—in France, for example, 13 à table, (13 at the dinner table) which was published in the fall of 2014 is a short story collection written by 13 top authors. Profits went to a charity providing meals for those in need. 13 à table hit the best selling list and sold nearly 260,000 copies in 2014. (The publisher had calculated that if 300,000 copies were sold 1 million meals could be provided.)

Interlink will be co-publishing with Pavilion Books in the UK and Moushabeck says that a German and a French publisher are “seriously considering it. They both would like to replace a handful of recipes with ones by famous chefs in their countries.”

Moushabeck hopes to interest many more international publishers during the Frankfurt Book Fair in October.

Soup for Syria’s crisp layout uses Massaad’s photographs of refugees—many of which are beautiful portraits of women and children—alternating with images of the wide variety of soups including Claudia Roden’s Borlotti bean and pasta soup, Nur Ilkin and Sheilah Kaufman’s Turkish chicken and rice soup or Greg Malouf’s fennel soup with lemon and cinnamon.

Anthony Bourdain writes: “Soup is elemental, and it always makes sense, even when the world around us fails to.”