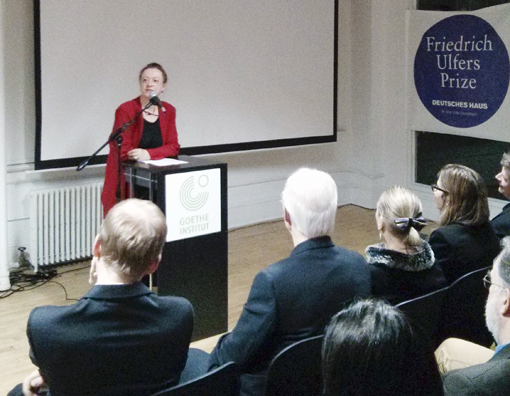 Legendary editor and translator, Carol Brown Janeway, died on August 3, 2015. Her dedication to literature in translation left a legacy of new classics for American readers. Carol Brown Janeway, a prize-winning editor, translator and foreign rights director at Knopf Doubleday, died on August 3. She was 71 years old. She was renowned in the publishing world for her dedication to literature in translation.

The first book she translated for Knopf after joining the publisher in 1970 was Das Boot by Lothar-Günther Buchheim. She also translated The Reader by Bernhard Schlink, My Prizes by Thomas Bernhard, Crime by Ferdinand von Schirach, The Storm by Margriet de Moor, and Measuring the World by Daniel Kehlmann, among others.

She won the inaugural Friedrich Ulfers Prize in 2013 for her work bringing German books to English-language readers. In his laudatory speech at the Ulfers Prize ceremony, author Daniel Kehlmann said to the audience, “the truth is, in publishing she is a legend.”

Words Without Borders awarded Janeway the 2014 Ottaway Award, which honors individuals who promote international literature in the United States, and the jury statement described her as “a leading advocate for literature in translation.” Luiz Schwarcz, Founder and CEO of Companhia das Letras, said at the award ceremony, “Carol is one of the greatest editors and translators to work in publishing. Through her hands, readers have had access to works of literature from many countries.”

Knopf Doubleday’s editor-in-chief, Sonny Mehta, released a statement on Monday, saying: “She was an esteemed figure here and abroad, and for forty-five years central to our publication of great works of international literature. Authors loved her. Agents respected her. And foreign publishers trusted her. I hasten to add—she was also a formidable dealmaker. She leaves behind an enduring legacy as an editor and translator.”