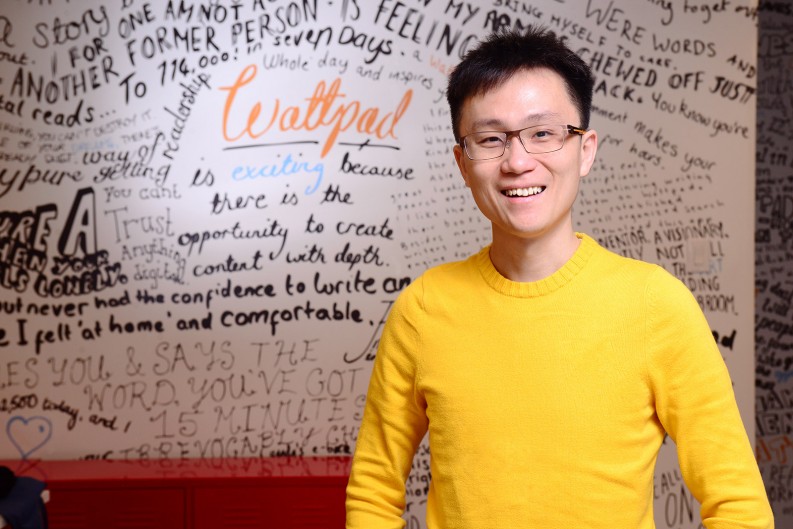 Allen Lau says Wattpad should attract a billion users across the world “without much difficulty” and they will monetize them through native advertising.

“Wattpad is more than simply a writing platform, it’s really a social media network focused on writing and books,” says co-founder Allen Lau. The positioning is deliberate as it represents the philosophy underlying the monetization strategy at the company, which now has some 40-45 million monthly users. “Most are readers,” says Lau, and “some 1.5 million people have posted something in the last 30 days, so we have a lot of writers as well. But what I really want is a billion users, readers and writers, using Wattpad. That is my goal.”

Having raised a total of $67 million over the last few years — and $46 million alone in 2014 — one assumes that there are those out there who believe Wattpad is positioned to fully exploit its dominant international market position in the free-to-use self-publishing space.

“We have raised a lot a lot money,” admits Lau, “But we are still very small, we only have 110 people. To support this business, I don’t need a lot cash. That is the beauty of the internet business — the number of users we serve on an per/employee business. We are extremely, amazingly efficient.”

Speaking in a conference room at the company’s well-appointed offices, Lau is relaxed and animated. The Hong Kong-born electrical engineer has also clearly had some media training, as he’s now more open, animated and articulate than in years past.

On the surface, the company appears to be similar to any Silicon Valley start-up, albeit one located not in California, but in Toronto, Canada: Screens just inside the reception desk tally the total number of users, posts and other overall metrics, while workers hum with quiet concentration.

“What is really special about Toronto is that is it really multicultural,” says Lau. “51% of the people here were born outside of Canada — go to the subway and you will hear ten languages. A lot of our staff are multilingual and have worked abroad; they are culturally and ethnically mixed. Understanding different cultures around the world is good for understanding our culture as a company. Two-thirds of our traffic is coming from outside North America — I don’t know if there is causation there, but correlation … certainly. ” Wattpad Presents is a television show sponsored by the company in the Philippines on Manilla’s TV5.

English is the top language used on Wattpad, and Spanish is second — representing 15% — having just overtaken Tagalog, which is spoken in the Philippines. Turkish is now 10% of traffic. “Turkey is culturally similar to the Philippines in some ways, in so far as people really use it as a social media platform and we are seeing the the same kind of acceleration there, as we did in the Philippines. Primarily, though, our users there are reading, not writing.” Other countries where Wattpad is increasingly powerful include Russia and Indonesia; unfortunately, the company has been shut out of China, and growth in India — where the mobile infrastructure is still growing — has been slower than expected.

“Why is it taking off in so many countries with such an order of magnitude?” Lau asks rhetorically, and answering his own question. “It is all all about mobile and wireless access. Mobile has been helping people to read and write more, so we are seeing the hockey stick — mobile is now the dominant way of access the internet, the order of magnitude is now ten times than two or three years ago.”

The reduction in the cost of smartphones and data in developing markets has also helped Wattpad. “In the US and North America in general — I am competing with Candy Crush, but outside of North America the options may not be as many,” says Lau. “If you are into reading — and everybody reads in every culture and every language — their choices may be more limited, they may not have access to bookstores. So we provide an easy accessible, free social access on mobile. All those elements combined have given us a very compelling service around the world. We are part of Facebook’s Internet.org, which provides the content free of data charges. They just started, so the traffic they can bring in may not be as significant, but we see the potential. ”

As for monetizing all these users, Lau is optimistic and putting much of his faith in native advertising. “Our atomic unit is a story,” says Lau, “for the brands and advertisers, there is no better place to tell a story than on the world’s largest storytelling platform.” He cites several examples, including working with 20th Century Fox to commission three stories about “extraordinary love” to tie-in with the film adaptation of John Green’s The Fault in our Stars.  “In that case, the promotion of the movie is subtle, but also explicit and it was super successful: we reached close to a million people reading it and had 60,000 comments.” In another round of native advertising, Wattpad worked with the candy brand Sour Patch Kids to produce the story “When Miss Sweet Meets Mr. Sour.” “You only see Sour Patch Kids mentioned once in the entire story. This is more about brand advertisement than transactional advertisement. It is more suitable and appropriate,” says Lau.

And yet another example is 7 Keys to Happiness by musical producer Pharrell Williams, a very short story that was a co-marketing arrangement to cross-promote Pharrell’s brand.

In addition to working with key North American brands, the company has also started working internationally, having recently curated a collection of stories for UK candy maker Cadbury and also with Eskinol, a cosmetics brand in the Philippines.

“Most of our users are millennials and under 30, so this is working to our advantage. The millennials around the world — they are spending their time on the mobile devices, this is how they entertain themselves on this devices — so we have the captive audience.”

But it’s not all for Wattpad’s bottom line, Lau asserts. “Aside from the business, one of our core missions is education, to spread the written word. Being ubiquitous in the world and encouraging people to read and write more, this is a great way to help out in the education sector.” Still, he notes, we are not going to get into textbooks, not in the foreseeable future. That is a different beast.”

As for reaching a billion users, Lau says it is just a matter of time — even without China. “We talk about short term, but I have a very long term view, I look at where this could be in ten years. Our core belief is that there are only a handful of big media types that will exist: video, photos, and the written word. The majority of the people on this planet will be creating content in those verticals. Right now we have three billion internet users, but that number will grow. Over time you can safely assume that everyone will have a reading writing device in their hand and four out of five people will be able to write. We think we should be able to get to a billion users without much difficulty.”