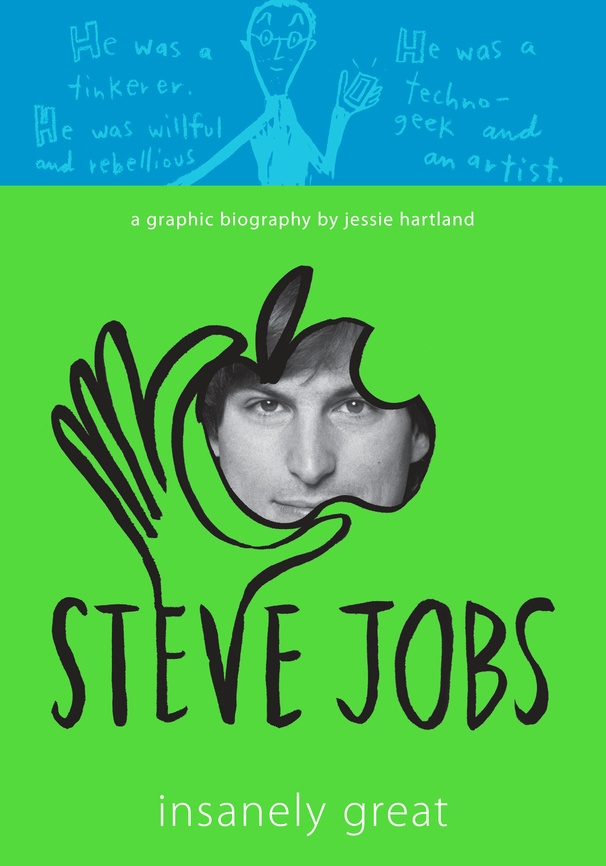 Jessie Hartland knew many people interested in Steve Jobs wouldn’t read Walter Isaacson’s 630 bio, so she depicted Job’s life for them in a graphic novel.

Jessie Hartland, author of the highly acclaimed graphic biography Bon Appetit: The Delicious Life of Julia Child – described by the New York Times as “bursting with exuberant urban-naif gouache paintings and a hand-lettered text that somehow manages to recount every second of Child’s life,” has turned her talents to another icon in her latest graphic biography: Steve Jobs: Insanely Great (Schwartz & Wade Books) Ms. Hartland recently sat down for an interview about her book, Steve Jobs, and translating a life into a graphic biography:

Publishing Perspectives: Why did you choose to write about Steve Jobs? Why now?

Hartland: Steve Jobs started a little business in his parents’ garage and it became the world’s most valuable company. Yet I’d heard about what a rebel he was: a college drop-out who left after just one semester and took a calligraphy course; a rule-breaker, an iconoclast. Like much of America, and the world, I wanted to know how he did this. How was he able to take such leaps, to look into the future and imagine what people were going to want? I admired his fondness for simplifying the complicated, bending rules, and questioning the conventional.

I had just turned in my children’s book, Bon Appetit, on Julia Child, which was also in the graphic biography format, and was searching for who or what to write about next. I wanted someone very different, a challenge. Jobs had just died. The media was abuzz, newsstands sagging with special issues. When I suggested Steve Jobs my editors said yes immediately.

Tell us about a section or two in the book that you found particularly relevant or interesting.

I especially enjoyed working on the part at the front of the book which delves a bit into the history of Silicon Valley where you see Steve and his dad picking up stuff at the junkyard. Their old pick-up truck moves through the frames, loaded up with junk, as you read about what it was like growing up in what was then known as Santa Clara Valley.

Who was your target audience as you wrote this book? Did that change at any point in the process?

The book began as a picture book, in color, and my editors were envisioning something like the Julia Child book. They wanted it to end with the Apple1 computer. I wrestled with that for a week or so, then proposed that I write about Jobs’ whole life—in black & white and for older kids. But after some thought, we felt the book would appeal to adults as well. Jobs’ appeal crosses generations and I wanted the book to reflect that and be something kids could share with their parents and vice versa.

Why do you think Jobs appeals to so many different demographics and age groups?

He liked to bend the rules, question convention, and take things to the next, never-before-seen level. He was a perfectionist and had the uncommon eye for BOTH superb engineering as well as superb design. He insisted his products be extremely user-friendly so that anyone—any age, nationality, or income level—could use and enjoy them.

You’re primarily a children’s book author but Steve Jobs is a book that will appeal to a wide variety of ages. Did you approach this book differently than your others? How?

Many people are interested in knowing more about Steve Jobs but aren’t going to read Walter Isaacson’s 630 page biography. My book is for them. It’s an easy, quick read. And because I feel people are lacking the knowledge, I’ve also got some computer history in there. Younger generations will learn about those little thingamajigs you stuck inside 45s to play on a record player, rotary dial phones, Polaroid sx-70 cameras, and that lovely fake woodgrain that decorated everything in the 1970s! Walk us through your process of writing/drawing a graphic book.

I get asked often about which comes first, the words or pictures. It’s a mix. Having worked in editorial illustration for so many years I know more than enough about translating words into pictures. And when I’m writing, or thinking about what points to include, I’m naturally drawn to what will make the best illustrations.

Critical to writing, illustrating and organizing a children’s book or graphic novel is having my binders with these movable pages, purchased separately. This book needed two binders, stuffed to the gills. As I’m working I’m constantly turning the pages and thinking about the flow of the book, how it reads and how it looks, too. A very detailed, cluttered page here? Let’s have a cleaner page here. The book got batted back and forth quite a bit as my editor, Anne Schwartz, found holes in the story, or places that needed clarifying or expanding on. This went on for 2 years.

I’m drawn to simplifying complicated material using pictures and words and although this book about Steve Jobs was a challenge, I enjoyed every moment working on it. I’m ecstatic that graphic novels have finally caught on in our country and could happily work in this format for the rest of my life!

Your last book was a graphic biography of Julia Child- are there more graphic bios in your future? What’s next for you?

I am illustrating a picture book about Ada Lovelace (1815-1852) a mathematician and pioneering computer programmer, daughter of the poet Lord Byron, and a fascinating character. In addition, I am writing and illustrating a story about an Italian truffle hound named Tartufo, a book about candy round-the-world, as well as writing my own graphic bio about growing up in Washington, D.C. in the 1960s.