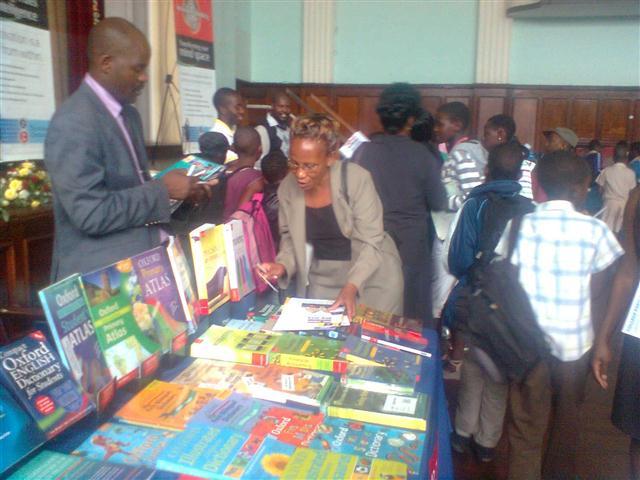 From the 2012 Zimbabwe International Book Fair

The Zimbabwe Book Fair, once the key event in African publishing, has recently declined. This year, a focus on growing the knowledge economy is giving it new life.

At The Herald, Stanely Mushava covered the opening of this year’s Zimbabwe International Book Fair, which opened on Monday with the theme “Growing the Knowledge Economy through Research, Writing, Publishing, and Reading.”

“In my travels and meetings with other African publishers, despite their participation in other book fairs such as the European ones (Frankfurt, London, Bologna), and the African ones (Lagos, Nairobi, Cape Town), there still lingers great nostalgia for the heydays of the ZIBF in the eighties and nineties.”

Bgoya, who has been in publishing for more than forty years, told the crowd that the ZIBF was “unique in its expression of Africa’s creative vibrancy and shared aspirations.”

“ZIBF was a place for publishers and other players in the book chain to dream of a future with publishers and avid young African readers taking our countries and our continent into the 21st century with confidence and conviction of a good place in the world of books,” he said.

“There was this great atmosphere. We were really looking forward to coming to Harare.”

However, as Bgoya told The Herald Entertainment, African publishers were hard hit by a “structural adjustment” in the early nineties, which created a “slump in international exhibitions.”

“Zimbabwe also suffered a lot of negative propaganda and some publishers were not even sure they would be safe here.”

But with economies growing across Africa, Bgoya told the paper the “next frontier” is helping to bring back the culture of reading, especially “among techno-captive youths.”

“It’s not an issue which format you like your books in but there is no alternative to reading. If you are tired of literature, culture or music, you are in big trouble.”

The fair’s executive chairman Obey Bvute added that organizers were putting together resources to “bring back the old glories and popularity of the book fair.”

“There is a need for significant improvement in the way we have been doing business so that we financially retool and rebrand to remain competitive in a competitive global market.”