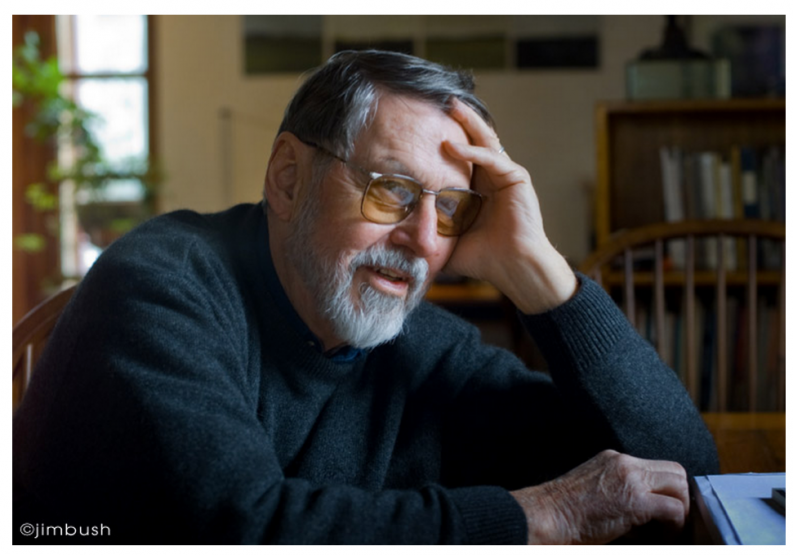 Ten years after the death of the American poet Robert Creeley, Kevin DiCamillo considers his legacy and lasting impact on American letters. Robert Creeley’s been dead for a decade – ten years without him – and his Selected Letters (University of California, 2014), ironically have initiated emotional, even angry, exchanges in the Letters section of The Times Literary Supplement. His memory and his words are very much alive.

Creeley was, and is, a big and continuing influence on all American poets, and for good reason. He came up with the gem “Form is never more than an extension of content,” which encouraged further experimentation in both poetic form and content.

Someone tells the story that when Robert Creeley was at Harvard in the forties and began reading William Carlos Williams at time when there was no professor to tell one how to read William Carlos Williams, he simply assumed that all of Williams’ lines were end-stopped, so that when he began to write his own poems in the one genuinely original verbal music in the English language in the second half of the twentieth century, it was with a patient sense of apprenticeship. Which, of course all writing is, so the story has a wonderful rightness, though I doubt it is true.(Twentieth Century Pleasures, Ecco, 1984, p. 150)

And for as much as Creeley was one of the founders and staples of the revered Poetics Program at SUNY Buffalo (along with a faculty that at different times counted Charles Bernstein, Susan Howe, Robert Hass, Ken Dauber, Raymond Federman, and perhaps America’s original “wild-man” of letters, Leslie Fiedler), he was never enclosed an ivory tower—though he was smart enough to draw a state pension from one (but no one ever accused him of being a sell-out.)

In 1993 he recorded his 1976 mid-length poem “So There” with Buffalo band Mercury Rev, on their EP, “The Hum Is Coming From Her.” If you’ve never heard it, you must. And if you have, you already know it warrants and rewards many replays:

It’s a revelation: in it, you can hear how Creeley read not only his own work, but W.C. Williams, and his other contemporaries, from Charles Olson to Louis Zukofsky.

So five years later, in 1998, when collecting the poems he’d penned between 1976-1983, he titled that particular volume So There. The book was one of the first from New Directions after the death of longtime publisher and founder James Laughlin, and, for the first time, featured a full-color cover by Jim Dine entitled endearingly “In My Eye I Saw Creeley’s Bright Face.”

While he was alive, Creeley seemed to be the affirmative answer to Dana Gioia’s book-length query Can Poetry Matter? (1992: Graywolf): he was, in the words of Van Morrison, “everpresent everywhere,” giving readings all over the globe and acting as New York State’s Poet Laureate.

An indefatigable traveler and drop-out, he helped get the concept of a “counter-culture” going back in the 1950s at the experimental Black Mountain College in North Carolina. And then transplanted it to Buffalo.

He attended poetry readings of all poets: when other “poet-professors” had packed it in after a grueling 3-day, 20-hour work week, Creeley could be found at an independent bookstore or local bar’s “Open-Mic Night”—not to read, but to listen. And his presence lent, if not gravitas to the event, then some excitement to those poets who had never met the man, but knew his work:

“I read my poetry for the first time tonight and Robert Creeley was there!”

He was as prolific as Isaac Asimov or Joyce Carol Oates. While his prose has been compared to “justice-department double-speak”, he’s not the first or only poet to fail in that regard: outgoing Professor of Poetry at Oxford, Sir Geoffrey Hill writes in a prose-style that I’m not sure even he himself understands.

Unlike Hill (for the record, in my opinion he’s the other greatest poet to write in English post-1950), part of Creeley’s charm is his utter accessibility and approachability:

it can’t be another.

and breath keeps on breathing,

when I grow up.

“When I grow up”: he wrote that line when he was fifty.

Homer, we are told, was a blind poet. Creeley was blind in one eye and the glass eye he wore dripped so it seemed he was always half-crying, which made for a good presence at any poetry reading.

But maybe what made his own readings so memorable was the sonic level of his presentation: this is what is so enjoyable about “So There” with Mercury Rev. There is music, literal and figurative, in his verse. Here, too, he’s in good company: W.B. Yeats wrote Words For Music, Perhaps and Joyce’s first volume of verse was Chamber Music (no “perhaps” about it).

Creeley said it best—and almost clearly—himself in his Preface to his 1991 Selected Poems (California): “Why poetry? Its materials are so constant, simple, elusive, specific. It costs so little and so much. It preoccupies a life, yet can only find one in living. It is a music, a playful construct of feeling, a last word, and a communion.”

Ten years without Robert Creeley the poet, the teacher, the half-blind troubadour. But his words sing on, so long, so there.