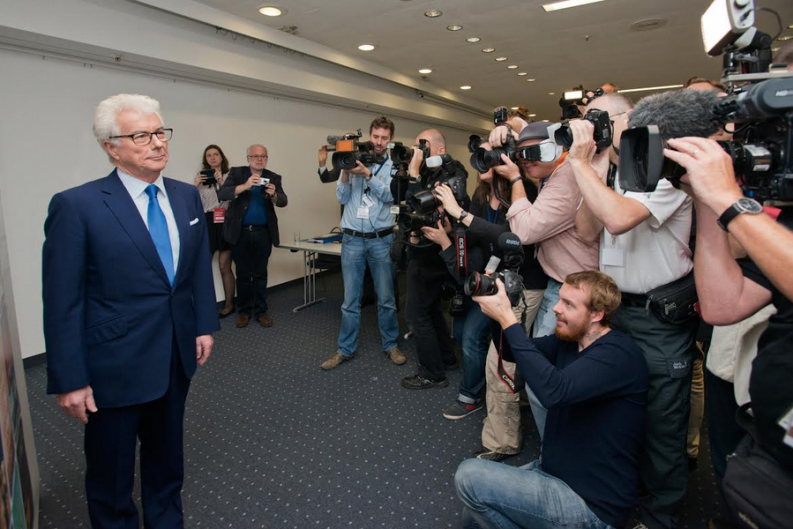 Ken Follett discusses how his blockbuster novel, Pillars of the Earth, is being turned into a video game.

The drama surrounding the building of a cathedral in 12th-century England doesn’t immediately lend itself to being adapted into a video game. But that is exactly what Hamburg’s Daedalic Entertainment — which has produced video games based on everything from Shakespeare’s plays to climate change — is now doing with Ken Follett’s blockbuster 1989 novel, The Pillars of the Earth.

“It has been exciting and interesting to see these guys take my story and pick elements from it and turn it into a game where the player can take on the role of one of the characters that sprung from my imagination” says Follett, who spoke with Publishing Perspectives by phone from his office in the UK.

It’s not the first time Follett has seen the book adapted. Pillars has served as the basis for a number of films, TV shows, and board games.

“In my stories, it is always clear who is fighting whom and who is on whose side. I don’t try to create an atmosphere in expense of the plot,” he explains. “In the game, people were able to see this. When they examined the story, they saw there are constant conflicts that take place and decisions that have to be made. They were able to see how those conflicts form the basis of a game quite quickly.”

The deal to adapt the book was brokered by Follett’s German publisher, Bastei Lübbe, after it purchased a controlling interest in Daedalic in May 2014. Plans are in place to release the game in 2017 to coincide with the publication of Follett’s new novel, a 16th-century international spy thriller set in Kingsbridge, like Pillars and its 2007 sequel, World Without End.

Still, Pillars should have enough brand recognition to stand on its own and attract curious fans and gamers: it is one of the bestselling novels of all time in Germany and has sold more than 25 million copies around the world.

Follett knows that this won’t necessarily translate into more sales. “There is always a risk, especially when one takes a book and transforms it,” he says. “The author is never completely comfortable when someone takes hold of the story and tells it again. We are always anxious about that process because I, as the author, have gone through so much trouble to make sure the story is logical in the plot, that there are not any holes in the story.”

That said, he opted not to contribute to the game script. “I have been through this process before with television and film people; the people at Daedalic are the experts, and it wouldn’t be smart for me to tell them what to do.” And though Follett, who is 66, says he hasn’t played a video game since Pong “in the 1970s,” he is nevertheless excited by what he’s seen so far.

“I hadn’t thought much about the artistic depiction of the characters,” he says. “It was surprising when Daedalic sent me the artwork for how the characters would look. They have drawn these characters at different ages, because the book spans a half a century and many of these characters first appear as young people and grow older. So, they become a little heavier and their hair begins to go grey and they will be little less upright. It turns out that it feels a bit like when an actor is cast in one of the films or TV series, and I think, ‘that is not quite how I pictured them’ but then it turns out just great.”