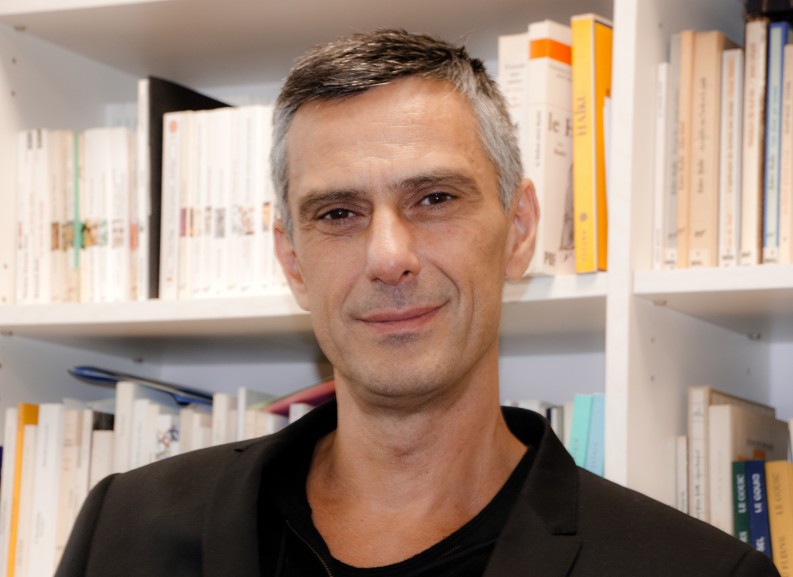 Under the leadership of Olivier Chaudenson, Maison de la Poésie been revived as a central hub for literary life in the city of Paris.

For the past two years something wonderful has been happening at Paris’ Maison de la Poésie, a public space dedicated to prose in an alley aptly named Passage Molière.

Whether it’s a gathering of poetry on the subject of exile with readings in Spanish, French and Farsi, accompanied by a musical guitar trio, a meeting with Egyptian author Sonallah Ibrahim, or most recently, a series of events built around the theme of Paris and London with authors such as Martin Amis, Nick Hornby, Zadie Smith or Jonathan Coe, accompanied by musicians and actors, La Maison de la Poésie, which used to exclusively host poetry events is now brimming with literary creativity in all shapes and forms.

“Live literature is at the heart of my work,” said Olivier Chaudenson, La Maison de la Poésie’s director since 2013 and the man credited for having given the space a new lease on life — he added “a literary stage” to its title. As Chaudenson wrote on the website’s page, “This new project constitutes a radical return to the name of the place itself, to create a home in the literal sense of the word that is at the same time inquiring, audacious and welcoming…” Before taking over the direction of the Maison de la Poésie, Chaudenson had been running the Correspondances de Manosque, a literary festival held each fall in southern France since 1999. (He still works with the festival).

“It was my laboratory,” said Chaudenson, “I wanted to do something different from book fairs. The festival was founded on the principle of exchanges and encounters and it became obvious that the public loved the interaction.”

In Paris Chaudenson continued on the same model as the festival with the difference that it is a permanent home for his laboratory and it runs all year long. “We give authors we invite carte blanche. We ask them, how do you want to express yourself — in a debate, in a discussion with another writer, would you like to read from your book, be accompanied by a musician? Of course some authors are no longer with us so in that case an actor can step in.

“…Literature and poetry frightens people. They see it as elitist; so the question is how can we attract these people? Music or using actors can help bring in a different public. To get younger people to come, music can be a conduit. You also have to have a relaxed space and younger authors. Of course writers must not overshadow their own work but all these elements contribute to live literature.”

The city of Paris, the region, and the CNL (Centre National du Livre) are the venue’s primary backers. Chaudenson says the role that a public space plays is vital. “Creativity is in a difficult place right now. Because the public really enjoys meeting authors, one has to use this, and develop this appetite, make it wider and more diverse. One has to try to have a panoramic vision.”

La Maison de la Poésie has partnered with the Labo des Histoires, (the story lab) which runs writing workshops for under-25s, it also is affiliated with a branch of the Paris university system for a Masters program in Literary Creation, which is still a relatively new field in the Francophone system.

Chaudenson runs the center more like a music club, programming cycles of events every two months “to be able to stay in sink with literary news and in order to have greater flexibility.”

He is planning to have authors who are engaged with the environment during the Paris climate talks next November and is looking ahead to the Euro 2016 — there is no dearth of writers who are soccer fans — which will be held in France.

Publishing houses keep him updated on their publications and let him know when authors are visiting.

Poetry too, is given a sizeable space within the programming. “What I’m trying to do is to break poetry out of the classical mold — in France it has suffered from a tendency to turn inward. Sales are low, and its public is confined and can be hermetic. I would like to reconnect it to the larger literary public — there can be a dialogue between poetry and music or even contemporary art,” commented Chaudenson.

As with the recent and highly popular season of Paris-London events, Chaudenson had wanted to develop a literary approach to London. La Maison de la Poésie collaborated with the British Council as well as with Granta, and the tandem was a natural for the two capitals, now a mere 2.5 hours away by train. Chaudenson hopes to continue the Paris-London programming over time. In the past he has also worked with the cultural section of the Dutch Embassy in Paris, with the Goëthe Institut and Pro Helvetia.

Developing the international aspect of the Maison de la Poésie is high on his agenda:

“We’re in Paris which is a cultural and literary capital that must be open to the world.”