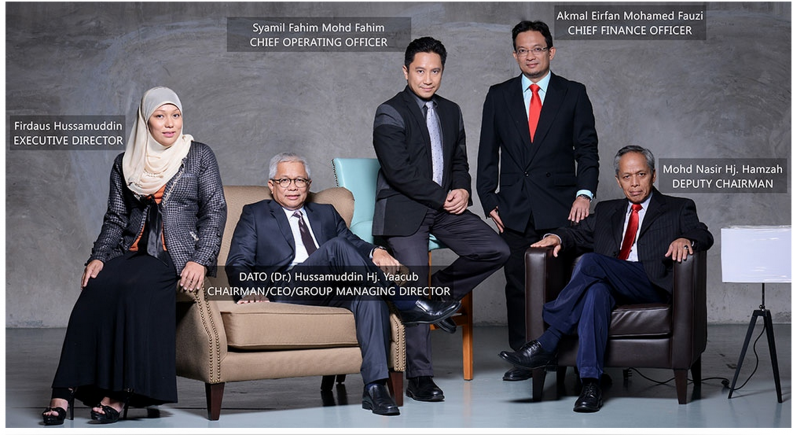 Karangkraf’s Board of Directors, with Dato pictured seated on the left

Under the leadership of Dato, Karangkraf Media Group has become perhaps the most dominant book publisher and printer in Malaysia.

The Karangkraf Media Group, situated on a 12-acre piece of land in Shah Alam, on the outskirt of capital city Kuala Lumpur is one of the largest publishing groups in the country with annual revenue of half a billion ringgit (USD130 million) and 1,500 employees. In many ways, it is still a family business, founder Dato’ (an honorific title given by the Sultan) Dr Hussamuddin Yaacob continues to head the company he started in 1978.

The son of an Islamic teacher who set up an Islamic school and supplemented his income by selling newspapers and books, Dato Hussamuddin was moulded in his early days that to teach is noble and reading empowers a person.

From the first Children’s Weekly that was published in 1978, Karangkraf is today the leading magazine publisher in the country with 21 magazines capturing 60% of the market for Malay-language magazines. More than 80% of the magazines are targeted at women with topics from parenthood and interior decoration, to fashion and lifestyle, as well as religion, among others.

Karangkraf’s Board of Directors, with tk pictured sitting in the center.

In the early ’90s, Karangkraf expanded into book publishing and invested vertically into commercial printing. Today, Ultimate Print accounts for about one third of the company’s revenues. In book publishing, Karangkraf publishes primarily romance novels — staple reading for the Malay-language market — under its Alaf 21 imprint. Another imprint, Karya Bestari publishes religious or Islamic titles, an important local market with religious titles frequently sitting on retailers’ bestsellers list. A third imprint, Buku Prima caters to children, teens and young adults. An average of 200 titles are published annually.

It is undeniable that Karangkraf has significant influence on Malay readership which is also the largest market segment, the other two being English and Chinese. Their daily newspaper, Sinar Harian, has a claimed print circulation of 160,000 while the digital edition sees 4.5 million unique visitors every month.

Malaysian newspapers practice self-censorship as their license can be suspended or withdrawn, which happened only recently to a daily and weekly publication. Indeed, Karangkraf has had two of their earlier newspapers closed down. However, Sinar Harian is known for its moderate and transparent views within allowed framework. It has seen its readership increase while other politically-linked papers have been punished with reduced readership.

42-year-old Syamil Fahim, chief operating officer of the group and nephew of Dato’ Hussamuddin, is  seen as leading the company into the digital age, from active use of social media, digital publishing and investing in print-on-demand.

While Karangkraf has seen decline in subscription of magazines leading to the closure of several magazines, they are also seeing steady rise in digital readership especially those catering to younger readers. An example is the print version of Remaja or Teenager magazine which had a circulation of more than 100,000. The print magazine was losing about 40% of its readership but the digital edition has more than 700,000 readers daily.  With such figures, advertisers are also choosing to advertise in the digital edition.

While seemingly taking a back seat, the 61-year-old Dato Hussamuddin continues to drive the company with his vision of “energizing the mind and soul” of readers, the company’s tagline. Energetic and restless, he has led the company through some interesting times, so what’s next?

From magazines, to books and newspapers, Karangkraf now has plans to produce a film based on one of their novels with sights on the international market.