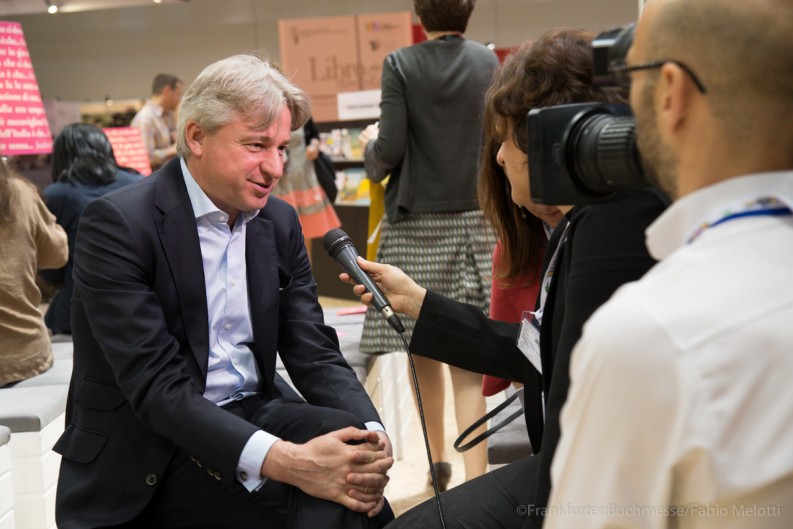 Juergen Boos gives an interview at the Turin Book Fair

Frankfurt Book Fair director Juergen Boos spends much of the year traveling to ensure that the best of global publishing is represented at the Fair each October.

The Frankfurt Book Fair has long surpassed being an event exclusively about books. “My job is a bit like being the curator of something like the Venice Biennale,” says Juergen Boos, director of the Frankfurt Book Fair. “I am constantly traveling the world to interact with the best people and find the best content and exhibitors for our Fair, be they publishers, service providers, or creators. As I expand my network, the network of the fair expands.”

You can think of Boos as the book world’s version of super art curator Hans Ulrich Obrist.

With his trusty, but battered aluminum Rimowa suitcase in hand, you’re just as likely to run into Boos at an event in Buenos Aires or Beijing, London or Lima, where he is a sought-after speaker and expert on global publishing and media trends.

In fact, you’re more likely to find him abroad than in Frankfurt itself, as he spends more than half his year on the road.

He notes that several things are consistent across all of his travels. “When it comes down to it, everyone’s business may be global, but I also see how it is predominantly local. While a publisher in Georgia or Mexico may be impacted by the global economy, they have problems and challenges that are local to them. For me, it’s about finding the ways to connect these local industries to the broader global community that gathers in Frankfurt.”

“I am constantly traveling the world to interact with the best people and find the best content and exhibitors for our Fair, be they publishers, service providers, or creators.”Juergen Boos, Director of the Frankfurt Book Fair

This will be even more evident this year with the upgraded layout of the Halls. “Bringing the English-language community into Hall 6 is going to make a huge difference to how people interact with these markets,” says Boos. “It will make it much easier. At the same time, we’ve gone through a lot of effort to make sure that industries and publishers that work together will be in close proximity—Elsevier will be near to Springer, for example, and the art book publishers, who all know and respect one another, and though competitors, often collaborate, will be able to talk. This way everyone will be able to share stories.”

Frankfurt is, at its heart, all about stories. In this regard, it is a place for connecting local stories to the broader global community, whether that is through exhibitions, the Literary Agents & Scouts Center, or the Guest of Honor program.

“One of the most amazing places I visited this year was Indonesia, which is this year’s Guest of Honor country,” says Boos. “Initially, I had no idea what to expect. But what I found in Jakarta was very sophisticated. It’s the world’s most populous Muslim nation, one that is a budding democracy, and to learn about how they are struggling with that responsibility while still dealing with the legacy of dictatorship, was fascinating.”

Among his strongest memories of his time in Indonesia was visiting the Jakarta home of publisher John McGlynn of the Lontar Foundation, who is assisting with the Guest of Honor program. “He had the most dramatic piece of art. It was a large sculpture made out of recycled plastic bottles that had washed up on the shores of the islands. The garbage that threatened to ruin the nature of archipelago was transformed into something beautiful. It was also fascinating to see how this impulse translated into their stories, which always have an interesting spiritual dimension to them.”

Another thing that impressed Boos was the Indonesian cuisine. “But not necessarily in Indonesia,” he jokes, “The Netherlands and Flanders are the Guest of Honor in 2016, so I’ve visited several times recently. It’s funny—I’ve always been a rice guy—but it turns out the Rijsttafel is the best thing to eat in Amsterdam . . . In this way 2015 and 2016 will be interesting bookends; the colonized handing over to the colonizer.”

So, like the best curators, Boos, too, has proven an eye for curious and rich contrasts, all in the service of inspiring dialog, discussion, and dealmaking.
“It’s important in what we do. We want to make sure that when people come to the Fair they are stimulated, enlightened, and interested. And, even more important, that they come away feeling connected to the world . . . no matter where they are from, and where they travel back to . . . ”