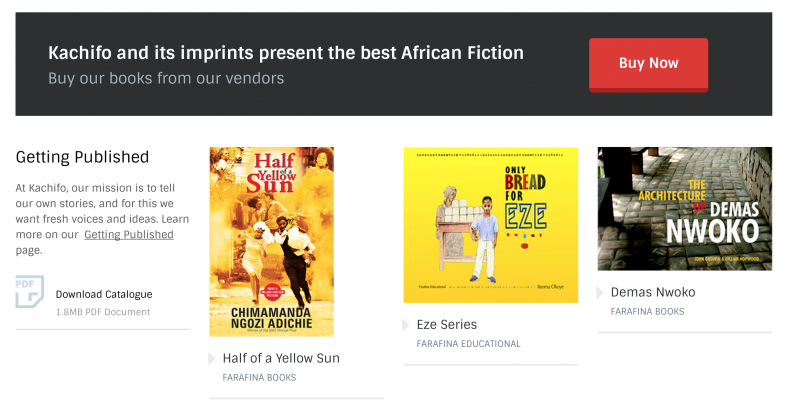 Kachifo, the parent company of Farafina, is one of the top publishers in Nigeria and Africa, yet has been unable to produce a popular writer on the level of a James Patterson or JK Rowling.

Nigeria’s The Sun outlines several factors that are harming African publishing, particularly the inability to develop and support popular bestsellers.

At The Sun, reporter Solomon Ojehonmon wrote a lengthy and fascinating piece about the crisis in Nigerian publishing entitled “Death of the Last Publishing House in Nigeria: Matters Arising.”

The entire article is well worth reading, but here are some highlights:

My attention was drawn to this article written by Amatesiro Dore on July, 12, 2013, and posted on Farafina website. The writer bemoaned the declining patronage of books from publishing houses, predicting that Farafina, undoubtedly, the most vibrant publishing house in the country at the moment, would soon conk out like the others.

The genesis of the decline in our reading culture and, ultimately, the fortunes of our publishing houses dated back to the mid eighties and early nineties. Then we have novels that could rub shoulder to shoulder with western books. Who could forget the pacesetters series of that golden era: Mark of the Cobra, Bloodbath at Lobster Close, The Worshippers, Angel of Death, The Black Temple, State Secret, Stop Press: Murder, and other great titles published by Macmillan? Those African novels, in terms of excitement, intrigue and adventure, have enough clout to compete with the James Hardly Chases, the Nick Carters and the Robin Cooks, which are the popular western novelists at the time.

The pacesetters novels and many others of its kind that abound in the country then were able to woo our youths to their pages. We used to have these informal but effective book clubs. Novels, both foreign and local, were passed from hand to hand among students from a school and beyond to include communities far apart. We occasionally hold meetings at classrooms, under large trees and at isolated backyards to discuss salient and intriguing parts of these books. Most of my close pals then [both male and female]were novel enthusiasts. Such was the literary bond in those days.

However, everything changed with the blossoming of the concept “African Literature.” A powerful group of old writers, seeing their grip on the literary industry plummeting with the advent and popularity of those innovative novels, were able to convince our publishers and other stakeholders in the literary industry that our literature must reflect African social-political and cultural conundrums, and nothing else. They buttressed their argument with the adage that soup without salt isn’t worth eating [deliberately ignoring the fact that soup with too much salt could fatally poison our system].

Bizarrely, our publishers and literary stakeholders bought the concept, completely failing to decipher the dubious scheme behind the idea. Macmillan publishers for instance made a mad rush to the book stands and withdrew the pacesetters novels under the guise they were not “African” enough. Other publishing houses follows suit. That blossoming era died a quick death and once again the old brigade with their “Africanism” took center stage and had continued so till date. Though most of these literary icons have since past their prime, they still sat on our literature, or appoint lackeys to do so, hence making sure they remain the only ones celebrated in the literary scene.

A short while ago, a publishing house decided to embark on a new African Writers Series to replicate the popular one of old. The advisory editor ignored contemporary writers with modern novels, instead reprinted ten books first published in the sixties and beyond. The next year, they also reprinted another ten books from that same era, even though I am sure they probably did not sell a single copy of the previous year books. This reflected an industry with no drive or determination to break away from the past and move to current pastures…

So, why can’t we have our own Nigerian Robin Cook, Sidney Sheldon, Michael Palmer, Dan Brown, JK Rowling? With our rich, untapped cultural heritage, our writers can produce novels with more flare than those western authors. Witchcraft is indigenous to Africa, yet JK Rowling, the English author of the Harry Potter novels, took advantage and created a wand-waving white wizard in her novels, and made billions in the bargain. I have seen some Nigerian manuscripts with more interesting themes than the Harry Porter novels that were brushed aside by our publishing houses. Because these authors cannot find publishers who won’t fleece them dry and give them practically nothing in return, or get grants to publish and promote their books, they simply faded into oblivion.

Read the piece in its entirety here.