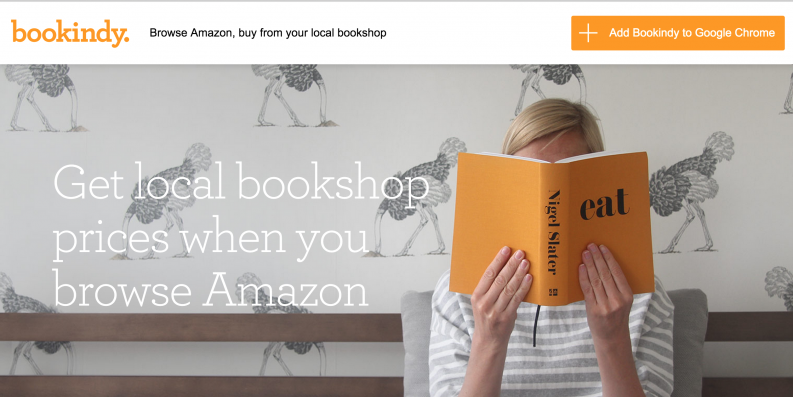 Technology is giving UK booksellers hope in their battle against Amazon, including a new web extension, Bookindy, that finds a local book price for you.

Independent bookstores have been thriving in the United States, with the number growing by 27% since 2009, according to the American Booksellers Association. Meanwhile, more than a third of independent bookstores in the UK and Ireland have closed in the past decade, according to the Booksellers Association — with 50 closing in the last year alone.

In the UK, fierce competition from Amazon and big box retailers, such as Tesco, has cut into the storefronts, which are also subjected to high rent and taxes. Tim Godfray, Chief Executive of the Booksellers Association, noted that “The last few years have been really tough,” and added that he was “envious” of the Americans’ ability to grow in the light of fierce online competition and ebooks.

Bookselling in the UK is nothing if not a bit beleaguered, but not for a lack of flair. In 2011, Waterstones brought in James Daunt — a famed London independent bookseller himself — to help save the chain.

Independent bookselling is a somewhat different beast from the large-scale endeavors of Waterstones. As Daunt himself told Monocle magazine in 2010, it takes close attention to the details — and a carefully edited selection of books — to thrive in the real world. Selective promotion supported by review coverage and bookseller enthusiasm are the key to moving dozens of books a day out the door.

Innovation helps as well. Foyles has sought to re-imagine itself as a “bookstore of the future,” and has among other things (and as we discussed here yesterday) launched a creative and unique app to help customers find books in-store. A sample “bookshop” from My Independent Bookshop.

Last year, Random House launched My Independent Bookshop, a social network from Penguin Random House designed to be an online space where “anyone can review their favorite books and show off their good taste on virtual shelves.” Readers are able to purchase books from the site and a small percentage of the proceedings is returned support local independent bookstores.

While this is largely a thinly veiled direct-to-consumer play by the publisher, it is a start and does draw attention to the need to support local indies.

More recently, we’ve seen the launch of the Bookindy service in the UK. Bookindy is a Google Chrome extension that pops up a window on Amazon.co.uk’s site and shows you the cheapest price of the same book at a local bookseller, as well as the distance you need to travel to get it.

According to the Guardian, the app uses information from Hive, a site that promotes purchases from local booksellers, online, much like the IndieBound website in the United States.

In a post on Medium entitled “I Don’t Want to Buy Books from Amazon Anymore,” Bookindy creator Will Cookson explained why he created the service:

I think we do care about local independent shops but we’ve turned into lazy, laptop-in-bed, impulse purchase type people, who crave convenience. If we are to buy from independent bookshops again, we’re not going to change our ways based on pangs of guilt or a sense of obligation. We demand something as convenient as Amazon. We demand something that gives us the choice of where to buy a book from with no extra effort.

With this in mind, I asked myself the question:

Can you promote local independent bookshops on the very system that’s designed to destroy them?

I wanted to build something that doesn’t compete head-on with the Amazon machine, but embraces it, augments it and nudges you towards the local option to buy.

Here are the biggest revelations in building and using Bookindy:

Of course, if you really never wanted to buy from Amazon again, you could also open your independent bookstore in the UK. We know just the man willing to help.