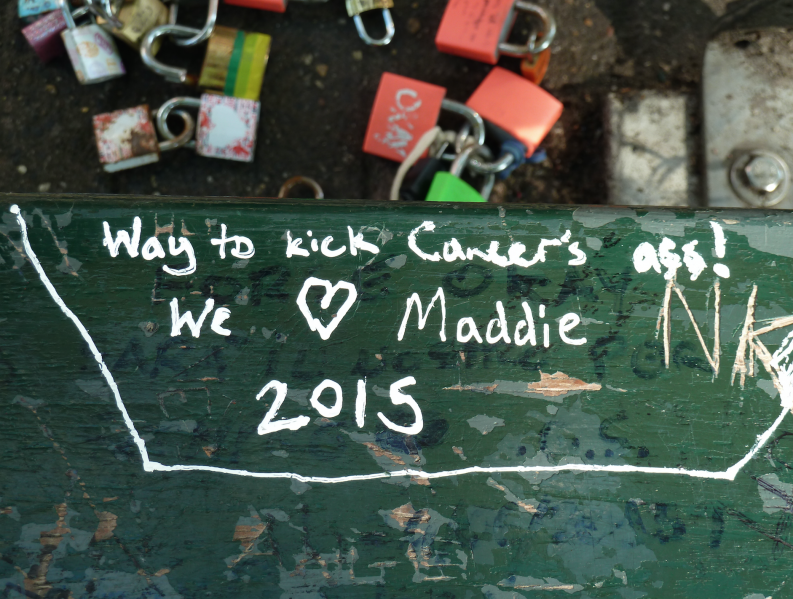 The Fault in Our Stars made this bench in Amsterdam into a YA tourist attraction.

The film of John Green’s bestseller, The Fault in Our Stars, has turned a bench in Amsterdam into pilgrimage site for young adult fans of the book.

Amsterdam has a new literary pilgrimage site to sit beside Anne Frank’s house. All day they come — in ones and twos, threes and fours, groups of older teenage girls on gap year trips to Europe; younger teenage girls on holiday with their parents; young women in their early twenties, recently graduated and just beginning work — all of them making their slow, Internet-researched way to this quiet canal corner and to the bench where one of the key scenes from the film version of John Green’s The Fault in Our Stars takes place.

It is here that Gus tells Hazel that his cancer has spread — a scene that takes place in Hazel’s hotel room in the novel but whose dialogue is faithful to the book. Just as in the novel, Gus and Hazel are in Amsterdam to visit Green’s invented writer Peter Van Houten, whose novel An Imperial Affliction they both adore, so in the real world these young people have come to the city on a similar pilgrimage, to walk in the footsteps of their young heroes, driven by a love of Green’s book. It is life imitating art and extremely moving to witness. A Danish father photographing his daughters at FIOS bench.

The bench lies at the junction of two canals bordering the Leidsegracht and Herengracht, just down from one of the city’s elegant, curved bridges. Many people pass it without realizing its special place in so many people’s hearts — although they may wonder why so many are taking photographs. Tourist boats slide past, but on the one I took during a recent visit to the city, its history did not feature in the commentary.

The bench is covered with graffiti and references to the novel. There are also the familiar padlocks (“love locks”), that cluster like multi-colored barnacles, which are removed every few days by the city authorities. ‘Way to kick cancer’s ass!’ reads one message. ‘Maybe okay will be our always’ reads another. ‘I found my always. Kris & Hannah’ ‘Thank you for all our little infinities Gus!’ — this last a message to a fictional character. There is something wondrous about the power of words to touch so many people.

In the short time we spent here on a recent long weekend with my wife and 17-year-old daughter (who wanted to come to Amsterdam for this reason), we met people from Chile, Denmark, Hungary, Mexico, the UK and the US — all of whom had come to the city specifically to see this bench. Fifteen-year-old Sophie from Hungary said: “I looked at it on Google views for like two weeks, working out how to walk here from where we are staying. We got lost like five times, but I’m so happy to be here. I love the book. I don’t know, it’s so…realistic.” Another message on the bench…

Emma DeBoef, a 21-year-old psychology student from Michigan, was one of many who asked me to take pictures from the other side of the canal. There is a book here, surely — TFIOS The Bench, which would have pictures of people at the bench and quotes (in fact, this has almost happened online: the site fightfromthebench.com, which has a plaque on the back of the bench, allows people to upload selfies from the location, and other benches, and asks for donations). “It’s my favorite book,” she said. “It’s so beautiful. I’m backpacking around Europe by myself and this is the reason I’m in Amsterdam.”

One Danish girl, visiting with her family, was visibly upset, and peeled away from her parents to write her own, private message on the bench. It is covered in signatures and messages and has become a kind of living fan book of remembrance — both for the novel itself and for friends and relatives who have been taken by ‘the emperor of all maladies’.

Do such physical places become even more important in an increasingly digital world? There is something special about visiting an ordinary location imbued with such feeling. It becomes an interior visit, a visit of the mind; one can see a quietness coming over people, and almost a slight hesitancy among parents as they see how strongly this story has affected their children.

It doesn’t much matter that there has been some doubt as to whether this is the actual bench from the film. Was it removed, or stolen? Whatever the truth, Amsterdam film commissioner Simon Brester says the one that is there now is the one from the film.

At the moment, the TFIOS bench ranks alongside Jim Morrison’s grave in Paris and Jack Kerouac’s grave in Lowell, Massachusetts, as a shrine — almost a YA holy site. How long will it last? Well, though it may seem absurd to compare Green with William Blake, some 190 years after the latter’s death, people still place ribbons on his gravestone in Bunhill Fields cemetery in London.

Many of these young people will also visit Anne Frank’s house while in Amsterdam — partly because they would anyway, but also because parts of the novel take place in the house too. It is odd to think that if the 15 year-old Frank were alive to day, she might also be among those inspired to make the pilgrimage to this bench.

Inevitably, some of these visitors will be afflicted by the curse themselves — and many, as the graffiti reveals, have already lost people to the disease. Morbid thoughts, but hard to keep them at bay as more people arrive, a half-smile or look of awe, even reverence, on their fresh faces.

These young people may never visit a site of such emotional resonance again. In years to come, will they remember the time they came with their parents — now long dead — to see this physical manifestation of love? I think they will.

Yes, it’s just a bench, but it suddenly seems to represent so much more — a symbol of love that ranks alongside Juliette’s balcony for this generation; a symbol too of the fight against cancer; and a touching way marker on these young women’s journeys through life.