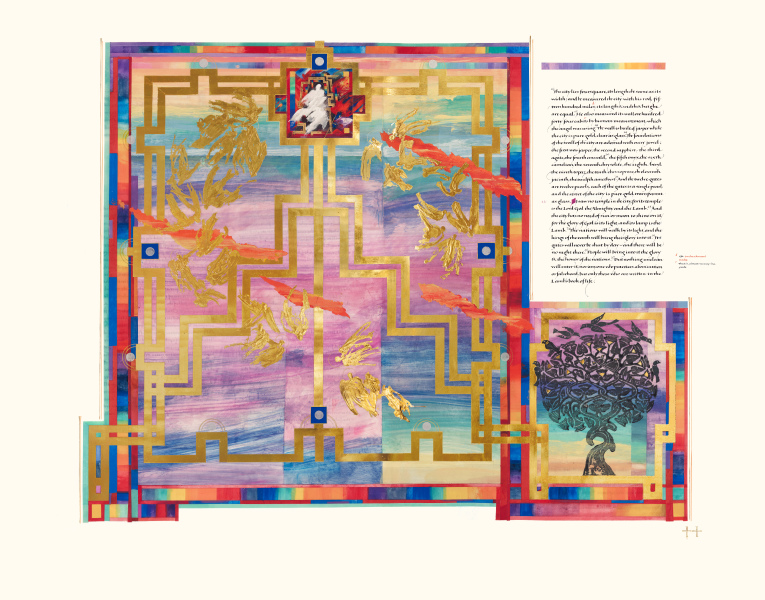 Vision of the New Jerusalem

When it comes to print books, sometimes innovation means returning to ancient methodologies. To wit: the creation of the new, Illuminated St. John’s Bible.

“The Bible is the calligraphic artist’s supreme challenge, our ‘Sistine Chapel’, a daunting task” – Donald Jackson Ebooks are the only kinds of books being “disrupted” and “innovated.”

Ever since childhood, Donald Jackson, Queen Elizabeth’s official calligrapher and a member of the Victorian Order, had an idea that made no practicable sense: he dreamt of creating a wholly-organic, hand-lettered, hand-illuminated Bible.

No Bible had been commissioned to be hand-lettered (at least in English) for almost five-hundred years. Since this was to be a monumental undertaking, Mr. Jackson needed a patron. As Geoffrey Hill wrote in his poem “To the Supposed Patron”: “There is no substitute for a rich man.”

It is a bit ironic, then, that Mr. Jackson found his principal patron(s) in, not rich men, but in a Roman Catholic Religious Order that espouses a vow of poverty: The Benedictine Monks. Perhaps stranger still, these Benedictine eremites were not Englishmen, nor even European: rather, they resided in St. John’s Abbey, Collegeville, Minnesota, home of Liturgical Press (a Roman Catholic Publishing House) and St. John’s University.

The project, which quickly earned the moniker “The Saint John’s Bible” whose final volume was presented this past April to Pope Francis, was on display for all of last year at the Knights of Columbus Museum in New Haven, Connecticut.

“This Saint John’s Bible is an organic design of the script,”, says Peter Sonski, the Head of Education, Outreach, and Visitor Services at the Knights of Columbus museum. “By that I mean that it is a Bible written on real vellum, scraped and cleaned just as the medieval scribes did. The styluses used are real quills and the inks are made of organic material such as soot.” Note that the feathers on the quills have been removed: “the feathers would have poked the writers in the eye or tickled their noses” says Donald Jackson.

Not only are pages from the completed Bible—magnificent printed editions of the massive seven-volume set are available for sale in the Museum’s gift shop as well as online — but tools, inks and other objects from the artist’s studio (which was located in Wales) were displayed at the Museum.

However, The Saint John’s Bible is not some retrograde tribute to the monks of the Middle Ages. Importantly, it is written in English (not Latin), in perhaps the most accessible and popular translation available, the New Revised Standard Version: Catholic Edition (meaning that it contains all the Apocrypha such as the books of Tobit, and Sirach, and the Story of Susanna). Also, instead of going for the “traditional” Book-of-Kells style illumination, Mr. Jackson and his team of illuminators went for a contemporary expression. The highlight of this comes in the Gospel of St. John in the famous phrase (where all Catholics must genuflect): “And the Word became Flesh and lived among us” where a faceless man-figure made of real gold seems to walk off the page and into the room. Mr. Sonski is quick to point out that this is not “an illustrated Bible” in the sense that every single page has an accompanying image that is immediately recognizable—“The efforts of the scribes and illuminators are an expression of what we see darkly,” Mr. Sonski added, echoing St. Paul’s famous phrase.

The project is huge. Literally: when opened the book is almost three-feet across and nearly two-feet tall. But it is accessible: one can purchase a smaller print volume for between $50-60.

But all the hard work has paid off: this is truly an original Bible, or rather re-working of the best-selling book of all time. And even if Jackson and his team had only done the lettering of the Bible, it would have been a magnificent project (the only hand-lettered American parallel I could find is The Abbey Psalter, which was a hand-lettered Book of Psalms done for Paulist Press in the 1980s, and is used as the official prayer-book of many Trappist monasteries.)

The artwork will not please everyone (rarely does any artwork please everyone): at its “worst,” some of the illuminations remind one of very good versions of 1970s wood-cuts by Virginia Broderick that were found throughout post-Vatican II “missalettes” and breviaries. But in the main, the work is pretty incredible. Take, for example, the genealogy of Jesus from the Gospel according to Matthew: this massive menorah pays homage to Jesus’ Jewish-roots and the Hebrew lettering even makes room for the Arabic script for Haggar, the mother of Ishmael (who is sometimes considered the first Arab).

This inclusion brings full-circle the tradition of handwritten Holy Writ: the Jewish Torah, the Islamic Koran, as well as the clutch of Holy books of the Hindu and Buddhist faiths are all still hand-lettered to this very day. Only Christianity has let this august and venerable practice perish. And while this is a “Catholic” Bible, the monks of St. John’s Abbey were eager to make it pan-Christian, that is accessible, available and relevant to all Christian denominations (hence, the NRSV translation).

Another gem of The Saint John’s Bible is the marginalia: again, instead of resorting to the kinds of “doodles” monks from The Name of the Rose might have inserted in the margins, the reader will find the present-day flora and fauna of Wales and Minnesota. The Rule of Benedict, which is the 1500-year-old “guidebook” of the monks of St. John’s Abbey (and for all Benedictine monks) stresses “ora et labora” (literally, “work and prayer”). This mantra has helped to produce a Bible that, in Mr. Sonski’s estimation is a “true, new modern presentation that brings Holy Scripture—and projects it a thousand years into the future.” It is perhaps fitting, then, that Benedictines had the foresight and insight to take on such a labor of love (and prayer): after all, they’ve been ceaselessly at prayer from illuminated Bibles since their founding in the 6th century.

The Bible ends, as does the world, with The Apocalypse (“The Book of Revelation”). While many readers find St. John the Divine’s vision (perhaps the most recondite and complex in all of Scripture) full of sturm und drang, the Saint John’s Bible reminds the reader—and the viewer—that ultimately it is a message of hope, and the vision of the “New Jerusalem” is one of the most consoling in this unique tome. In a world where war rages from Ukraine to Syria, in Palestine and Israel, Iraq and Afghanistan, to the saber-rattling in North Korea, a view of peace on earth is indeed consoling.