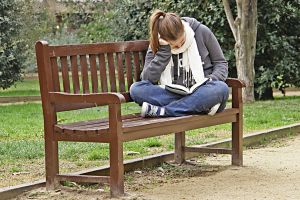 Each year, Allensbach Media Market Analysis conducts a major study of 25,000 Germans about their media consumption habits and behavior. Due to the study’s size, its conclusions are an accurate representation of the German-speaking population aged 14 and over, making it one of the most important media market studies in Germany. Below are some key findings for 2015 on German reading habits:

How often do Germans read?

In 2015, 44.6% of the German population read a book at least once a week. This number has been declining constantly over the last two years: 46.9% called themselves regular readers in 2014, down from 48.8% in 2013. Avid readers — those who read daily — make up 14.1% of Germans, whereas readers who only read sporadically — less than once a month — were at 37.7%. The group of occasional readers has grown significantly over the last year: in 2014, only 25.1% claimed to read sporadically.

Who is reading and buying books?

Split by gender, women read far more than men: 54% of the women read a book at least once a week. The same can be said about book buyers: women between 30 and 44 years old are the group buying the most books.

A solid quarter (25.1%) of Germans don’t buy books at all. Book buying in general seems to be correlated to age: the older you get, the less likely you will buy a book; 28% of Germans over 60 years of age didn’t buy any books in 2015.

Which book format do Germans prefer?

While the majority of people polled (38.6%) said they read both paperback and hardcover books, the gap between either/or readers is much bigger: 27.9% prefer waiting to buy the cheaper paperback, while 8.5% would rather buy hardcover books.

Germany — a nation of readers? Looking at these numbers, one might say: not so much. But then again, given the rise in Internet usage, availability of other entertainment options, and people’s finite attention span, it seems that plenty of Germans still choose to buy and read books