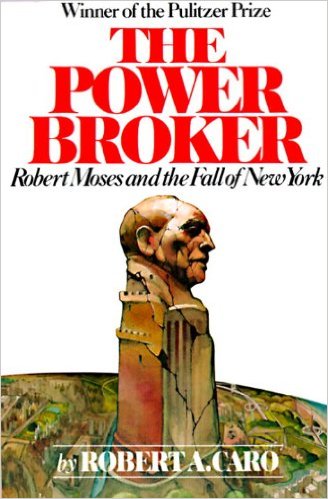 Kevin Di Camillo considers the legacy of Robert A. Caro’s massive biography of Robert Moses, “The Power Broker,” four decades after its publication. After the initial enormity of the 9-11 attacks had sunk in—that the Twin Towers were no more—round after round of “Town-Hall” meetings began about what, exactly, should replace the iconic World Trade Center. There was even a beautiful book published by Rizzoli entitled Imagining Ground Zero: The Official and Unofficial Proposals for the World Trade Center Site (2004) which captured pretty much every conceivable replacement for the World Trade Center, including re-building the Towers in a safer, more re-enforced iteration.

Problem is: it took over a decade to build anything. And, depending on your aesthetic sensibilities, the 1,776-foot WTC replacement is either the worst form of architectural-kitsch (“Get it?! 1776!”) or the best-of-the-worst result that a committee could come up with: neither beautiful, nor particularly tall, nor all that inspiring.

Someone once wondered aloud, “I wonder how quickly Robert Moses would have re-built those Twin Towers?” And it’s a good time to revisit the legacy of Dr. Moses vis-à-vis Robert Caro’s massive biography of the builder of New York City and State, which celebrates its 40th birthday this year: Power Broker: Robert Moses and the Fall of New York.

Robert Caro penned the definitive, staggeringly-researched biography on the world’s greatest builder. Next to Robert Moses, Ramesses of Egypt, Albert Speer, and pretty much every other architect, engineer, and megalomaniac pale in comparison.

The creepy part about all of this is not so much that Moses had no real background in engineering or architecture (which is indeed strange), nor did he ever have a driver’s license (which is downright bizarre for a man who built every major thoroughfare in New York), but he never held elected office: ALL of his very real power was by appointment. At one time he held something like nine office positions of power. Simultaneously.

Robert Caro’s massive tome, which served as a sort-of living tombstone for Robert Moses (who lived another seven years after its publication), seemed downright prophetic at the time: in 1975, New York City was on the brink of bankruptcy; two years later came the power-Blackout, and by the time the affable Ed Koch took over for Abe Beam, New York was considered “ungovernable”.

And for a 1,200-page book, Caro produced a real page-turner. And head-scratcher: how could one man not only build so much, seemingly with no system and strictly based on whim, and simultaneously shove around every New York mayor, governor, and even president Roosevelt?

For anyone who has even been stuck on Moses’s most notoriously-misguided project, the Cross-Bronx-Expressway, which in one stroke displaced tens of thousands of denizens AND condemned anyone foolish enough to drive on this hated road to a parking-lot-existence, The Power Broker is not only a cautionary tale, but an indictment of everything that was wrong with New York City under Moses.

Caro, who has now nearly dedicated his life to writing a multi-volume biography of Lyndon Baines Johnson that, as one critic noted, it’s taking Caro longer to write it than it took LBJ to live, got a lot right in The Power Broker: Moses was indeed much too powerful, and a lousy S.O.B. to his own brother, but as was often noted at almost every opening of a new park or bridge or beach or power-plant, he was still The Man Who Got Things Done, Dammit.

There had to be a backlash against Caro’s demonization of the anti-semitic, racist, self-hating Moses and there was: Robert Moses and the Modern City: The Transformation of New York by Hilary Ballon and Kenneth T. Jackson (Norton, 2008). Moderate in tone, exceedingly-well-researched, documented, and full of photographs and a museum tie-in, the book concentrated less on Moses’s unmitigated disasters (The New York Coliseum, the shell-game he played with low-income-housing, his private kingdom/sinecure of The Triborough Commission), and rather looked at the very real green spaces Moses built in a city where only buildings seemed to matter. One need only visit the recently re-opened Williamsburg Pool in Brooklyn to wonder if Moses wasn’t on to something after all: without him how many pools, parks, playgrounds, and preserves would New York have today? Further, Robert Moses: The Master Builder of New York City (2014: Nobrow) by Pierre Christin and Olivier Balez, which is a gorgeous “graphic novel” doesn’t exactly rehabilitate Moses’s image—but again it’s hard to read this lavishly illustrated book and not be impressed by what Moses actually accomplished: from Shea Stadium to Lincoln Center to the world’s largest Power Project to Jones Beach to the world’s largest bridge (The Verrazano-Narrows), it’s kind of tough to imagine any one person actually pulling all this off in a couple of life-times.

And given the skull-clenching, non-stop-time-consuming, let’s-have-another-meeting-about-it rebuilding of Ground-Zero, it’s impossible to imagine a committee doing anything even remotely comparable to what Moses built.

Caro can’t be faulted for his facts, or even at the time, his conclusions, namely: that one person must never hold so much power over a city (make that a state) ever again (let alone an unelected official). Still, one has to wonder not only how quickly Moses would have rebuilt the Twin Towers, but, given the vacuum he left, what in New York has been built of note?

Sure, Rudy Giuliani cleaned up Times Square, both the Yankees and Mets got new sanitized stadiums, and Williamsburg real-estate went into the stratosphere, but all of these things already existed under Moses (who, to be fair, also didn’t care much when the Dodgers and the Giants split, ditto New York’s football teams, who oddly both play in New Jersey). What is new in New York post-Moses?