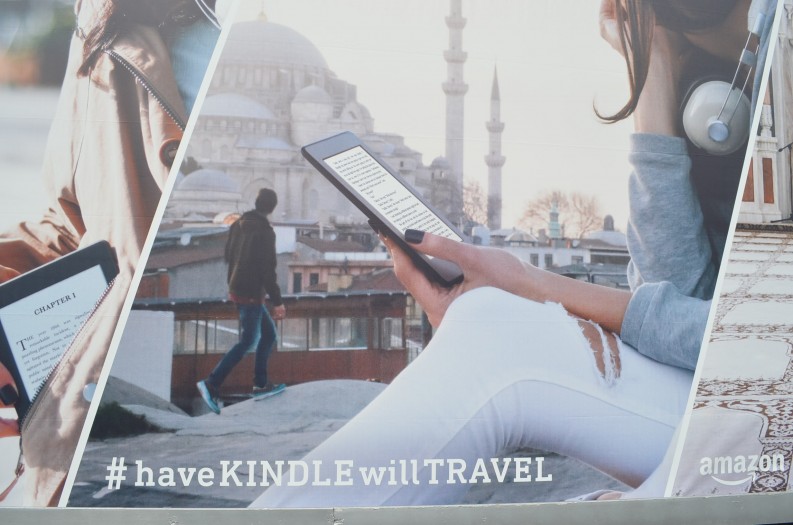 Badges of cool for Istanbul – the ripped jeans, the headphones, the Kindle…

Roger Tagholm deconstructs the brilliance of Amazon’s new Kindle advertisements, which promote the ereader as a chic, travel companion and paragon of cool.

Amazon is using the Summer reading season for one of its biggest ever advertising campaigns in the UK. It has taken the new, jaw-stopping, giant, digital screen at London’s Waterloo station — most recently used for Jurassic World — to promote the Kindle as the passport to a life of global travel and indefinable “cool.”

The campaign, which also sees full-page broadsheet newspaper advertisements and extensive panels on both overground and Underground rail, has the slogan #haveKINDLEwillTRAVEL and features the device and users in various exotic locations around the world. Amazon is also cleverly encouraging Kindle owners to post their ‘Kindle travel’ pics on Instagram at the same address — so this is really a global campaign. Why pay any extra when you can let the public continue your campaign free of charge. Amazon gets its message across at London’s Waterloo Station

The Waterloo screen is one of the premier advertising locations in London, partly because the station is the capital’s busiest with some two million people arriving and departing every week. Called ‘Motion@waterloo’ it consists of a state-of-the-art, 40 x 3 meter, 6mm pixel, high-definition screen spanning much of the length of the concourse. The Amazon campaign includes the giant message haveKINDLEwillTRAVEL and it would be very, very hard to come through the station and not notice it. It is on a loop with advertisements for the movie Fantastic 4 and Sky Sports, which shows the kind of high end company Amazon keeps — and that presumably, only Amazon can afford.

Here’s a controversial thought: since this is effectively a free campaign for all publishers, should they be thanking Amazon? One suspects publishers might say they have already paid, and paid … The ads in this campaign are very cool — and interesting to deconstruct. One features a young woman in a camper van in Patagonia, with toddlers in tow. Hell, man, she shows it’s all still possible. You can be a hippy chick and have a family and be out in the wild — all you need is a Kindle. Look, I can put my feet up on the dashboard. Of course I’m cool.

Another (at top) shows the minarets of Istanbul and a pretty thing with her fashionably ripped jeans and chunky, cool headphones. You too can be like this. You just need a Kindle. Another suggests someone is enjoying the street food in Marrakesh, Morocco; another has a Kindle owner on Phuket, Thailand; another is enjoying the stillness of Mono Lake, California … stop! Stop! Enough! I want it all. I want to inhale this elixir of cool! A Kindle is a passport to a life of worldwide adventure, beautiful women, handsome rugged men, South American gaucho hats, ethnic food, grungy clothes, I want it all now, now, now.