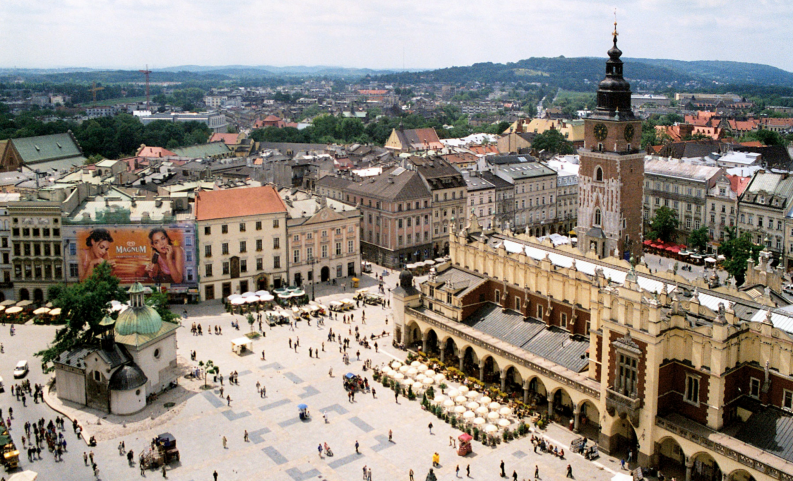 Krakow’s main market square has long been a culture center in Poland.

By Jaroslaw Adamowski in Warsaw

The city councillors of Krakow, P0land are planning to launch the country’s first program to support small bookstores. The move is being made to bolster the city’s image of Poland’s “city of literature” and home to two of the country’s Nobel Prize laureates in literature, poets Czeslaw Milosz and Wislawa Szymborska — who were awarded the prize in 1980 and 1996, respectively. Krakow was awarded the title of a UNESCO City of Literature in 2013.

In the past few years, Krakow saw the number of its bookstores decrease from 95 to 76. With the planned move, the city councilors are planning to provide financial support and preferential rent deals to small bookstores, and upgrade their status to local cultural centers to enable new sources of financing for their activities. With these measures, municipal authorities would be able to provide more funding for various literature-related events organized at local bookstores.

“We want to support [small] bookstores to allow them to compete, with their quality of services and activities to promote literature against big chains which have dominated the market,” said Tomasz Urynowicz, a city councilor from the Civic Platform party, as quoted by local daily Gazeta Wyborcza.

In his statement, the councilor was most likely referring to Empik and Matras, Poland’s two largest bookstore chains, which have been dominating the country’s bookselling market.In Krakow, Empik and Matras operate nine and 10 outlets, respectively.

As earlier reported here on Publishing Perspectives, at the end of 2014, Empik operated some 215 outlets in Poland, with outlets located both in larger citries, such as Warsaw, Lodz or Krakow, as well as in a number of smaller municipalities where they are often the only source of books for locals. For Empik, whose product range also includes music, movies and video games, books are just one product line, while Matras aims to attract mostly avid readers, and owns 170 bookstores in Poland.

Under the Krakow plan, to be drafted by November, local bookstores are to obtain additional support starting next year. To enable bookstores to generate additional sources of revenue, they will be allowed to dedicate up to 30% of their floorspace to other activities, such as the sale of coffee and food or cultural events, while maintaining their right to secure preferential rents offered to bookstores.

According to Urynowicz, another major issue is related to the scarcity of bookstores in the periphery of the city, and their relative concentration in Krakow’s center.

“While there is an average of one bookstore per 18,000 inhabitants in the city centre, the district of Nowa Huta has only one bookstore for 250,000 of its inhabitants,” the councillor said. “We would like bookstores to serve as cultural hubs. We want them to become, with the use of support provided by the city, places where readers can meet authors, and discuss books and literature.”

The difficulties experienced by Krakow’s bookstores are part of a countrywide trend. In Poland, there is an average of only 0.48 bookstore per 10,000 inhabitants, compared with the ratio of 1.69 bookstores per 10,000 inhabitants in France, as indicated by local publishing market research firm Biblioteka Analiz. From 1999 to 2012, the number of bookstores active in the Polish market fell from some 2,900 to 2,200. The decrease has forced local bookstores to lay off 25% of their workforce.

Of the 700 bookstores which were shut down in Poland in the past several years, three were located in close proximity of Krakow’s Main Square, where the city’s intellectual and academic life had traditionally flourished, according to data obtained by Gazeta Wyborcza.

Meanwhile, Krakow’s councillors have also been mulling over officially supporting the draft book bill by the Polish Chamber of Books (PIS), based on France’s Lang law from 1981, which aims to introduce fixed prices for new releases for a one-year period. The measure would help small bookstores compete with larger chains which often use their market position to negotiate exclusive discounts with publishers.