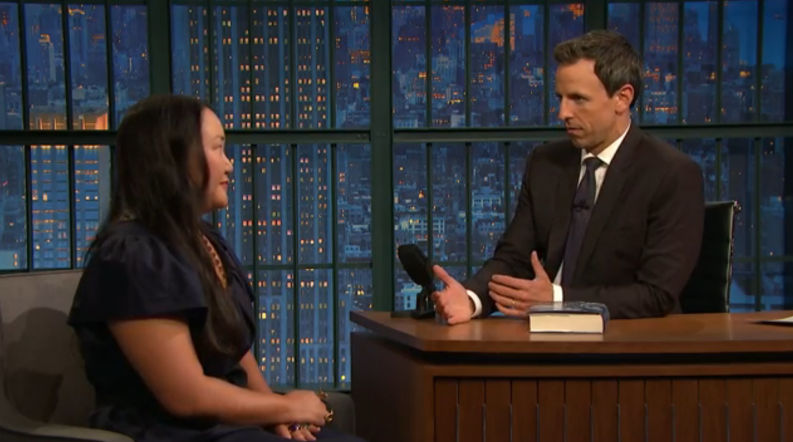 Seth Meyers on Late Night, a US TV talk show, has embraced interviewing novelists and the result is often a significant boost in sales following broadcast.

At the Wall Street Journal, Sophia Hollander examines NBC’s “Late Night with Seth Meyers,” noting that the show is “staking out new ground in late-night TV, injecting novelists and poetry readings into the genre’s usual fare of celebrity stunts and viral hits.”

Case in point is Hanya Yanagihara, who was invited on to talk about her new 736-page novel, A Little Life, (Knopf). and initially laughed off the invitation as a joke.

“I just thought they were high,” she told Hollander. “If you told someone in late night, ‘I’d like to send on someone with zero TV experience to talk about a literary book for 10 minutes,” it sounds like a really bad idea.” But after her ten minutes, according to Nielsen BookScan, the next week’s sales of her book rose by a most impressive 54%.

“I think this is somewhat of an experiment for them,” Yanagihara said. “For writers who never get any attention anywhere, it’s a great boon.”

Hollander notes that while Comedy Central’s late-night hosts Jon Stewart and Stephen Colbert have both interviewed authors; neither one “embraced fiction.” Not so Seth Meyers, whose mother instilled in him a love of novels, and has had more than a dozen authors on his show in the past year, mixing well-known authors like George R.R. Martin and Stephen King along with less well-known critical faves like Joshua Ferris and Marlon James.

“Writers are just naturally great storytellers,” he told the Journal. Unlike a celebrity, “when an author comes out more often than not you’ve never seen them, you don’t know anything about their personality. The fun for me and the fun for the audience is just realizing how many different kinds of people write books.”

Claire McGinnis, publicist for Riverhead Books, told the Journal that, “We’re used to kind of scraping for any kind of attention for literary fiction,” calling Meyer’s enthusiasm “absolutely thrilling.”

And as is often the case, an appearance equals an increase in sales. Former prosecutor Linda Fairstein, for example, saw sales of her novel Terminal City (Penguin Random House) soar by 500% the week after she was on the show.

But to many authors, being on late-night TV is more than just selling books. Joshua Ferris, who talked about his novel about a dentist, To Rise Again at a Decent Hour (Hachette), with Meyers last year, told Hollander that “Plugging a book is often a humbling experience. Being on Seth’s show was the opposite. It was a gift.”

Marlon James, the author of the critically acclaimed A Brief History of Seven Killings (Riverhead), a 704-page novel written “largely in Jamaican patois,” said he was “astonished” to receive the invitation to be on “Late Night.” (Even his publicist admitted to the Journal that it’s “not necessarily the most accessible book.”)

But Meyers had read the book while on vacation and loved it and so he was invited. And because he of that invitation, book sales rose 31% in the week following his appearance.

“I first just though, well, my publicist is working overtime, which she is,” James told Hollander. “But the idea that behind his booking was simply that he fell in love with these books just kind of blew my mind. It’s just not one of those things you expect.”