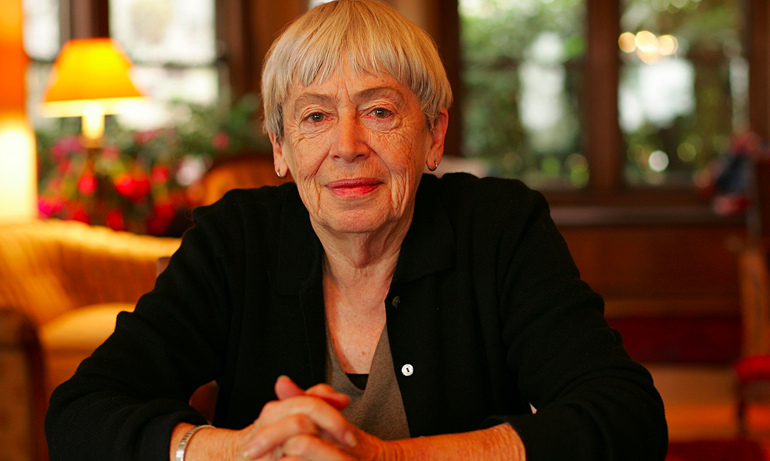 The Guardian reports that Ursula K. Le Guin has once again aimed her sights at Amazon.

“The grande dame of fantasy Ursula K. Le Guin has weighed in forcefully to the debate about Amazon’s role in publishing. In a blogpost on the site Book View Cafe, entitled “Up the Amazon with the BS Machine, or Why I Keep Asking You Not to Buy Books from Amazon,” the American author has spoken out against what she describes as the company’s increasing influence not only on the bookselling market but also on which books get published, promoted and read. Her fierce conclusion is: ‘Every book purchase made from Amazon is a vote for a culture without content and without contentment.’”

She opened her blogpost by making clear that she’s not opposed to everything about Amazon:

Amazon and I are not at war. There are vast areas in which my peaceful indifference to what Amazon is and does can only be surpassed by Amazon’s presumably equally placid indifference to what I say and do. If you like to buy household goods or whatever through Amazon, that’s totally fine with me. If you think Amazon is a great place to self-publish your book, I may have a question or two in mind, but still, it’s fine with me, and none of my business anyhow. My only quarrel with Amazon is when it comes to how they market books and how they use their success in marketing to control not only bookselling, but book publication: what we write and what we read.

What does particularly irk Ms. LeGuin is the change of attitude that focuses on immediate profits while sending book after book into oblivion when they don’t immediately find an audience.

The steady annual income of such books is what publishers relied on, till about twenty years ago, on to support the risk of publishing new books by untried authors, or good books by authors who generally sold pretty well but not very well.

“That idea of publishing is almost gone, replaced by the Amazon model: easy salability, heavy marketing, super-competitive pricing, then trash and replace.

“Any publisher willing to print a book that isn’t easy to market, or to keep books that sell modestly but steadily in print, is bucking this trend. Most of them are small houses. The few big publishers that now continue functioning at all under the deliberately destructive pressure of Amazon marketing strategies are increasingly controlled by that pressure, both in what they publish and how long they keep it in print. This pressure forbids them to value quality as well as salability, or to plan in terms of long-term sales.

“And the independent booksellers that were and are the natural habitat of the non-best-selling book have been driven out of business — first by the chains that operated as part of the BS Machine, and now, decisively, by Amazon.

“As a book dealer and publisher, Amazon wants no competitors, admits no responsibilities, and takes no risks.”