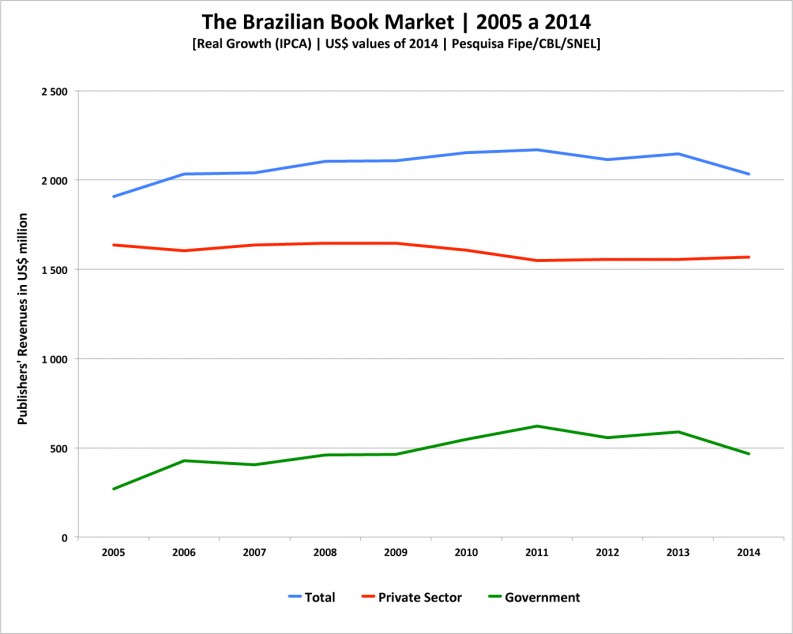 “Sadness has no end, but happiness does.” This is how “Felicidade,” a famous Brazilian samba by Antonio Carlos Jobim, starts. This is also the best way to describe the recent performance of the Brazilian book market. The Brazilian Book Chamber (CBL) and the Brazilian Union of Publishers have released their annual report for 2014 this month, and the figures are definitively on the sad side. According to the research conducted by the respected Institute of Economic Research Foundation (Fipe), revenue for Brazilian publishers shrank 5.16% last year — totaling just 5.41 billion reais (US$2.03 billion). There was a nominal growth of 0.92%, which didn’t come close to offsetting the official inflation rate of 6.41% over 2014.

It is possible to guesstimate the figures in consumer prices applying average B2B and B2C discounts for the different sectors of the book market and arrive at 7.5 billion reais (US$ 2.82 billion). What happened? Well, the Brazilian government stepped on the brakes last year and cut its own book purchases by 21%. That brought the government’s share of publishers revenues down to 22.91%, where in previous years the government purchases represented at least a quarter of sales. For example, in 2013, the share was 27.5%. On the happy side, publishers saw real growth, although small, on revenue coming from the private sector. In 2014, Brazilian publishing companies invoiced 4.17 billions of reais (US$1.57 billion) to bookstores, distributors and other channels, which represents growth of 0.86%, something that could be considered an important achievement in light of ongoing Brazilian inflation.

It is clear, however, that the happiness of recent years — a time when the world looked at the Brazilian market as the land of opportunity, when the country was the guest of honor at Frankfurt — is absolutely over. But, as the aforementioned samba goes, “happiness does end,” and it seems now that it will take a little more time for the Brazilian book market to return to its potential, especially if we put it into the context of historical performance.

From 2005 to 2014, the Brazilian book market grew only 5.79%, while the country’s GNP increased 39.45%. It is true that this economic growth was heavily based on growth in commodities sales, but the book market still should have performed better in such a flourishing environment.

Looking at the decade, one can also see that the government actually had a crucial impact on the publishing industry’s development. Despite the drop in book purchases in 2014, government acquisitions grew 38.35% over the decade, while sales to the private sector dropped 1.13%, as calculated in real terms. And the truth is that publishers’ revenues from the private sector have been pretty flat during the whole period. For 2015, the scenario unfortunately does not look promising. The Brazilian government is facing severe budget cuts caused by the economic slowdown. Forecasts predict a 1.2% drop in the GNP this year plus an inflation rate over 8%. Worse than that, the Federal government is late in paying publishers for books already delivered under its National Textbook Program (PNLD), something that can cause serious cashflow problems for the larger K-12-focused publishing companies.

In 2014, the publishers sold over 120 million books under the PNLD program and invoiced the government over 1 billion reais (US$376 million). The talk of the marketplace at the moment is that the government may cut the budget for such programs even further in 2015. On the trade side, the annual School Library National Program (PNBE) has not even started its 2015 project yet, something that is typically done in March. Some publishers are already skeptical that there will be a PNBE edition this year.

The overall message to foreign publishers looking to enter the “booming” Brazilian book market: just trust your guts…and hips. You’ll know when it’s the right time to dance to the music, whatever the tune, happy or sad.