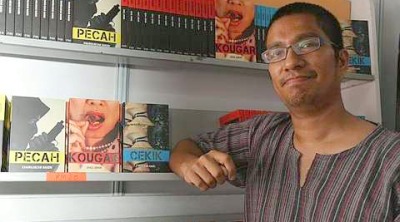 Among the “genres” Malaysia’s Buku Fixi publishes is one of their own invention: “Mindfuck” or better known as paranormal horror.

In Malaysia, publishers including Buku Fixi and Lejen Press, are capitalizing on social media to find writers of pulp fiction, selling over 1 million copies.

Writing for the New York Times, Chen May Yee examined the growth of a new genre of Malaysian fiction: “risqué tales of crime, horror and gritty young love that are aimed at young Muslim Malaysians.”

This “new-style pulp-fiction” is written largely by first-time writers who started their careers as bloggers, and is the “product of an independent, irreverent publishing industry that has sprung up over the past four years and has tapped into a desire for escapism among young Malaysians as their country has become more socially conservative.”

Chen writes that more than 10 Malay-language publishers have emerged in the last few years: most of them specialize in pulp fiction, while others focus on poetry and social criticism. Between them they have published hundreds of titles with estimates that more than a million copies have been sold at pop-up stalls, online vendors, and brick and mortar bookstores.

And while the books can be filled with typos, they do boast glossy eye-catching covers, making them a “cool fashion accessory” among some young Malaysians. Also contributing to their popularity is that the titles, unlike old-school romance novels, are written in the “street slang favored by the young,” and have story lines that can’t be found in traditional pulp fiction, including such no-nos as sexual promiscuity and communism. Amir Muhammad, who founded one of Malaysia’s largest independent publishing companies, Buka Fixi, told the paper that “Newspapers are subject to censorship and things like libel law, whereas with fiction, you can then create scenarios people kind of recognize.”

He added that, when he first started publishing, “bookshops told me Malays only read romance, religion and cooking. I thought, ‘There’s got to be more to life than that.’

And apparently there is – his best sellers include Kelabu, a love story “in which a girl hires a fake boyfriend to make her real one jealous,” and Asrama, a horror story.

A rival publisher, Lejen Press, has published the enormously successful novel Awek Chuck Taylor, which, written in a mix of street slang and text messages, has sold close to 40,000 copies, enough to make it a “superstar of independent publishing.” It tells the story of Hafiz, a Malay slacker, and his adventures chasing girls. “Awek” is the slang term for “girl,” and “Chuck Taylor” of course, refers to the popular brand of sneakers worn by a character who “declares herself an agnostic and a fan of books on communism and anarchy.”

“The publishers of this new pulp fiction solicit manuscripts, or at least first chapters, through social media. The offerings are then read by a panel of writers and readers, who are paid in free books. The authors get no advances, but collect royalties of 10 percent to 20 percent of sales.”