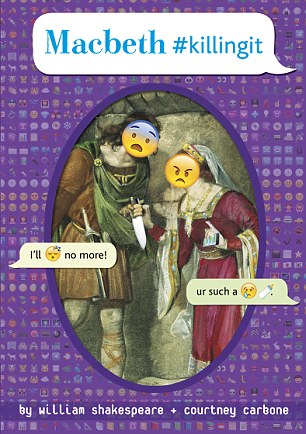 The headline at the Daily Mirror says it all:

“Yolo Juliet, Macbeth’s #killingit: Academics horrified at ‘dumbing down’ of Shakespeare as the Bard’s greatest works are retold in EMOJI”

Penguin Random House has published what it calls its OMG Shakespeare series, which “takes the Bard’s original prose and replaces it with slang, text speak, and emoticons.”

Among the titles release are — sigh — Yolo Juliet, srlsy Hamlet, A Midsummer Night #nofilter, and Macbeth #killing it. The books went on sale last week and include a helpful glossary of terms (of course) to explain what the various emojis and abbreviations mean, and are available on Amazon UK for less than £10 each.

“Retold” by Courtney Carbone and Brett Wright, the plays have been, as reported in the Independent, “condensed down to terse Whatsapp-esque message, with characters “checking in’ rather than walking on stage, and updating their relationship statuses at key moments.”

The Independent also reports that the books have been backed by a strong marketing campaign, “even getting their own stand in one store, which stated: ‘The classics can be *sleep emoji* *grin emoji* *dead emoji*. Introducing OMG Shakespeare!’

Here’s a sample of the “text”: Professor Alan Smithers, Director of the Centre for Education and Employment Research at the University of Buckingham, told the Daily Mirror that OMG Shakespeare was yet another sign of the “dumbing down” of education.

“It is an attempt to make Shakespeare more accessible, but it is taking the core out of the plays – Shakespeare himself.

“Shakespeare is about the story that is told, but is more to do with the rhythm of the prose and the language used.

“It is well intended, but at the heart of it is something absolutely disastrous.

“I remember when they tried to recreate the Bible as a cartoon and this sounds familiar. While part of the idea is useful, you lose the real literature behind it. It will be the same with Shakespeare.

“So yes, let’s make Shakespeare more accessible to children and students – but let’s do it with better teaching.”

To the authors’ credit, one of the books carries the dedication: “To all my extraordinary English teachers, I’m sorry.”