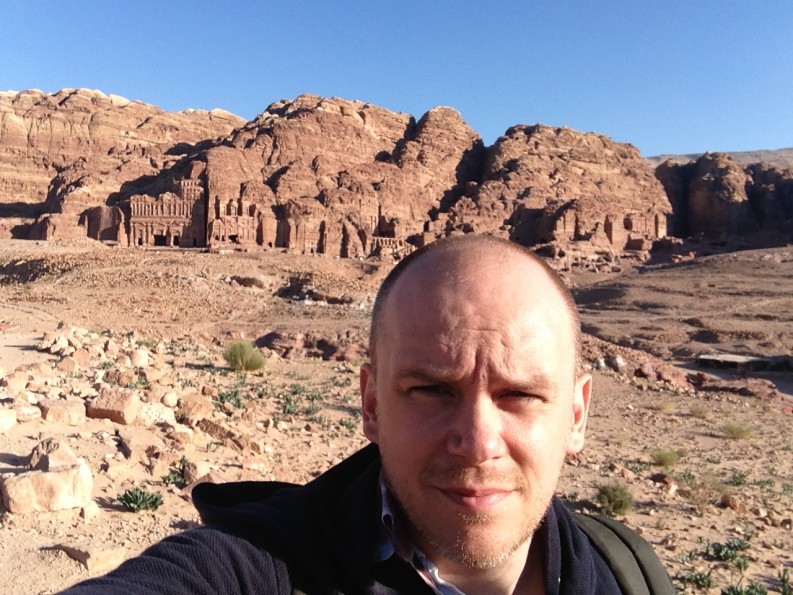 Nathan Hull at Petra in Jordan.

Nathan Hull of Mofibo describes why he believes the Middle East and North Africa offer vast potential for publishers looking to expand internationally.

In the last two years I’ve traveled extensively and held events in the MENA region taking in UAE, Oman, Qatar, Lebanon, Jordan, Egypt and Palestine. Of course, I could be found absorbing the cultural riches of the mysterious hammams, bustling souqs, peaceful holy sites, enjoying tea with bedouin chiefs, incredible food and much more, but perhaps more left of centre to the less intrepid mind would be my travails at book fairs, hackathons, gaming conventions, innovation labs and universities across the region. Indeed, my very final public task as a Penguin was to deliver a speech on the banks of the River Jordan to 400 games developers interested in the power of narrative in gaming.

The region is vast and includes regions referred to as GCC (Gulf Cooperation Council) — which includes the UAE, Oman, Qatar, Lebanon, Jordan, Egypt and PalestineUnited Arab Emirates, Qatar and Saudi Arabia — and Levant, which largely constitutes Jordan, Lebanon, Syria, Palestine and Iraq. Then, of course, there’s the whole of North Africa stretching from Egypt to Morocco.

If you take into account the local population of approximately 360 million people and then add to it the Arab diaspora, the number of Arabic speakers on the planet is a staggering 390 million-plus people which, in itself, feels like an opportunity. So the resounding question lies in why their hasn’t been a larger and quicker race to this region from the publishers or the retailers.

As befits an area of such diversity, it’s full of nuances and oddities. To bombard you with some food for thought:

Whilst the written form of Arabic (Modern Standard Arabic) in the Naskh script is omnipresent across the region, the language is spoken in more than twelve distinct dialects. Furthermore, the script reads right to left and none of the Western conversion houses support it. Although there’s a broad acceptance of the standard written form across MENA, it’s not uncommon for people to still show a preference for work from their own region (the Egyptians notoriously preferring to read Egyptian literature for example). Another twist would be the high-volume of expats in the UAE who actually read in English or other European languages ahead of Arabic. The MENA publishing market as a whole leans very heavily towards academic books so question marks sit around the impact of trade titles. There are stark differences in different areas’ strengths in publishing with the likes of the Lebanese being lorded for their love of fiction. Oh yes, and piracy is endemic. But then again, there’s also no taxation on books…it’s a half empty/half full situation.

When you mix even this little cluster of idiosyncrasies in with centuries of continuous change, you can start to see quite a puzzle emerging. But this shouldn’t be a distraction, it’s merely part of the learning curve and a necessary start towards understanding the region. Don’t lose sight of the the fact that PWC recently estimated the Arabic book market to be worth $1.5 billion.

From a business perspective, it was simply this sense of scale that first attracted me to the region. But what I didn’t necessarily expect to encounter was the digital creativity and opportunity emanating from both organizations and individuals.

In The New Digital Age, Google’s Eric Schmidt comments on the “speed, strength and contagious mobilization effects” of devices and social networks’ impact during the turbulence of the Arab Spring. This same impact can be seen and felt daily in the innovative approaches being take in the region to business challenges, artistic ventures and social change. Not least in that the technology has provided wider social interaction for freedoms between groups of people without the complexity of traditions.

From Vine social-storytellers to incredible coders and games developers at the Jordan Gaming Summit and the boundless enthusiasm of digital-meets-print by projectpen.com (an Oasis5000-funded project) the region started to unfold for me.

Eager to continue seeking the new and the innovative, I continued my search by holding lectures at creatives institutions and universities in Dubai, Sharjah, Palestine and beyond. As part of the Stephen Fry: Your Fry project four amazing Lebanese organizations (MENA Design Research Center, Beirut Creative Cluster, ALBA university, and Platform39) even collaborated to deliver “Fryed Felafel — The Words Of Stephen Fry Told Through The Lens Of Lebanese Culture.”

Students, creatives, authors and entrepreneurs across the Middle East brimmed with ideas, IP, challenging questions and a very obvious passion for stories.

My own cautionary word would be that this diverse, rich, challenging and rewarding region is, without doubt, an area for focus and growth in publishing. But it’s like truffles. You need to get in there and sniff it to truly appreciate it richness. And then you need to know how to treat it. You need to be able to localize, to understand the Arab people and appreciate the potential loyalty of an Arab customer. The region’s creativity is a rich as it’s history. The people’s appetite for stories is as old as mankind. And there’s close to 400 million of those people.

As Chief Business Development Officer at Mofibo, Europe’s success story in the world of eBook subscription models, Nathan’s role is to identify the markets in which Mofibo will roll out as well as establishing relationships with media, telco and hardware partners, and negotiating terms with publishers and authors. Previously, Nathan was notably Penguin Random House’s Digital Product Development Director, with strategic responsibility for its blossoming digital portfolio and a strong focus on product innovation.