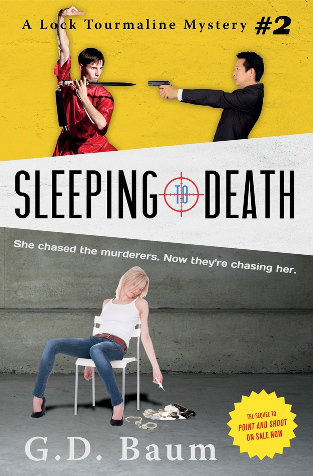 Our June 2015 selection from BlueInk Review, a service which reviews self-published books. All titles are deemed worth of further consideration. Sleeping to Death, by G.D. Baum: Featuring former-New-Jersey-cop-and-martial-arts-master-turned-freelance-bodyguard Lock Tourmaline, this is the second installment in G.D. Baum’s hard-boiled crime fiction series. This time, Tourmaline’s client, who runs a Korean drug ring, tasks him with learning who killed her brother in prison. As the story twists from one development to the next, Tourmaline wonders if his client is playing him. Baum’s writing is clean and breezy, and the book is such fun that readers who haven’t read Point and Shoot, the first in the series, will want to get onboard at the beginning of this exhilarating ride. Author’s current residence: Union, NJ. Read review.

Souls of Lions, by R.E. Mitchell: The absence of glory in war is a prominent thread in this sensitive, highly compelling novel about five young men fighting for the South during the Civil War. Beginning in 1864, the story follows brothers George and Walsh and three friends, all Confederate soldiers slogging through swamps and other physical hardships near the Civil War’s end. Civil War scholar Mitchell does a brilliant job evoking war’s miserable physical environment and is equally adept at depicting the banter, dark humor and moments of bravery among the men, who speak of war’s futility and curse the warmongers who never actually go to war. A truly moving read, the story is a fitting remembrance for this year’s sesquicentennial marking the end of the Civil War. Author’s current residence: Madisonville, KY. Read review. Christianity and Cosmic Consciousness, by Alexis Georg Hoen: Hoen’s revelatory book explores how Christian theology can be understood universally, not through dogma but through Cosmic Consciousness. Using credible research, Hoen argues that if we strive to view religion through this lens, we can see the teachings of Jesus Christ as a means of “living beyond oneself as an integral part of the cosmic whole.” This book is a worthy work of scholarship; even non-religious seekers will appreciate the value of Hoen’s notion of Cosmic Consciousness. Author’s current residence: Los Angeles, CA. Read review.

Boston Glass Ceiling, by Grace E. Moremen, Editor: Edited by her daughter Grace E. Moremen, this utterly compelling compilation of letters, spanning from 1922-1925, follows Agnes Edwards Partin as she works as a secretary-cum-reader-cum-editor for the Atlantic Monthly Press. It also covers Partin’s subsequent travels in Europe, where she interviewed several literary luminaries, including A. A. Milne, and delves into her struggles to advance in what was essentially a man’s world. Vivid with rich details that skillfully depict the bustling, upbeat flavor of 1920s Boston, these letters offer a carefully edited key to the past; readers will particularly enjoy Partin’s entertaining companionship.  Author’s current residence: Clermont, CA. Read review.

Behind the Lines: WWI’s little-known story of German occupation, Belgian resistance, and the band of Yanks who helped save millions from starvation, by Jeffery B. Miller: Using statistics, stories, and documents, Miller weaves a riveting story centered around the Commission for Relief in Belgium (CRB). A privately run organization, CRB kept the entire Belgium nation from starving during WWI, after the Germans marched into the neutral country, leveling cities, requisitioning supplies and blocking seaways — which meant that food couldn’t reach the citizens. With a master’s touch for synecdoche, Miller details the financial, diplomatic, and organizational hurdles the organization overcame in order to feed millions. In the process, he delivers an intriguing and powerful story that won’t disappoint. Author’s current residence: Denver, CO. Read review.

Inflagrante and Delicta: the Common Period, by Andrew Holt McMinn: Toss Armistead Maupin’s Tales of the City into a blender with a pinch of Ken Kesey and a dash of Dr. Seuss — and don’t forget to liberally garnish with magic realism — and you’ll have something very much like this book. Narrated by a dog, this story follows a cast of wacky characters —conjoined twins separated as adults, a transvestite sexaholic, a skulking butler and more — as they all live together in a middle-class borough in London.  Rife with wry humor and emotional dissonance, the narrative is sure to reward liberal-minded readers who enjoy a high dose of camp.  Author’s current residence: Surrey, Great Britain.  Read review.

Djeri and Other Stories, by Sandra M Mallia: Stylish and evocative, this Australian novel focuses on the stories of a small neighborhood of exiled Aborigines. Through ignorance and by the cruel designs of others, they have been pushed out of mainstream Australian life. While some choose to assimilate,  others opt to reinforce their aboriginal roots. Ultimately, the novel documents their struggle to resist humiliating labels and live their own lives. This compelling book will appeal to anyone curious about how outsiders battle to find their place in the wider society, as well as those interested in a neglected part of Australia’s history. Author’s current residence: Victoria, Australia.  Read review.

Ere àwòrán, by Michael Jay Nusbaum: An accomplished historical novel, Ere àwòrán details two men’s struggles in the 1860’s. The novel alternates between the storylines of Michael Joshua Smith, a New York City Jew who joins the Navy, and Osumaka, a captured slave who works on a South Carolina plantation. As Smith, an abolitionist, raids slave ships, Osumaka makes his way to freedom traversing the Underground Railroad. Enlivened with a narrative blended with fictional and historical characters, Ere àwòrán reflects a deep understanding of the history of slavery, offering a heartwarming story sure to please a wide audience. Author’s current residence: Far Hills, NJ.  Read review.

Farragut and Family: The Making of an Elder Hero, by Robert L. Caleo: Caleo’s debut biography chronicles the life of Civil War hero David Farragut, the man who issued the legendary order “damn the torpedoes” as he led Union ships in a battle to capture New Orleans. With a clear writing style, Caleo follows Farragut’s life from a young Navy midshipman to his becoming the first four-starred admiral in the U.S. Navy. Well-researched and concise— complete with chapter notes, selected chronology, bibliography, index, illustrations, and selected letters — this book is a first-rate profile of the general and will appeal to both Civil War and naval history buffs alike.  Author’s current residence: Manchester, NJ.  Read review.

Reading Champs, by Rita M. Wirtz, MA: Written by reading specialist Wirtz, this easy-to-follow guide is intended as a supplement for school curricula and reading programs. It offers simple lessons and activities directed towards learning or reviewing reading skills, including sounding out words, comprehension, and sequencing. The book contains 48 instructional or informational charts, including a lesson template, as well as lists of resources and links to many California common core reading websites. In all, this is a valuable resource for anyone tasked with helping students improve their reading. Author’s current residence: Eugene, OR. Read review.