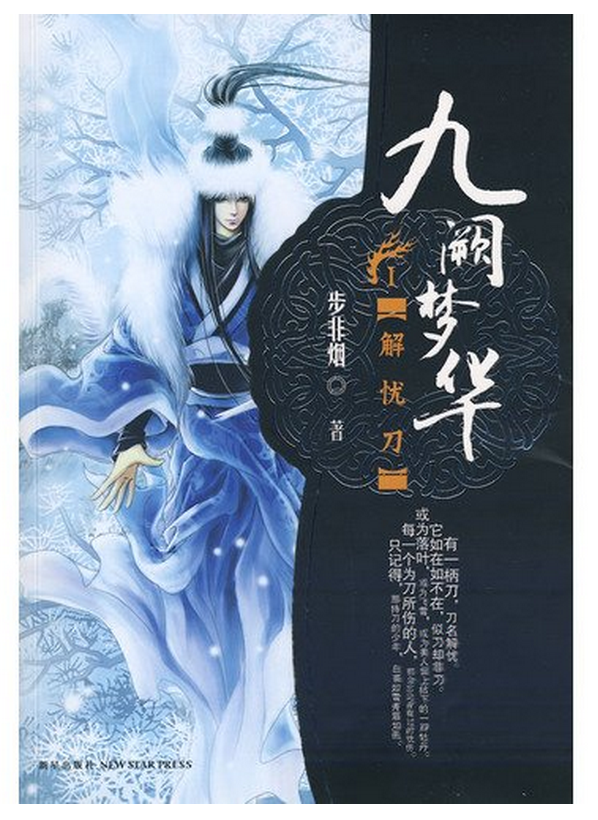 A title by Bu Feiyan who has published some 25 books.

And while the nation has seen rapid growth and development in online literature sites, many writers began by publishing their work on online forums. Bu Feiyan, an author and Chinese literature lecturer at Renmin University, told ChinaDaily that initially, she was just writing for fun when she started on tianya.cn, now China’s largest internet forum.

“I was a common college student in 2002,” she told Xu. “[One day] I made up a wuxia (martial arts) story in my mind, but none of my classmates wanted to hear it, so I decided to write it down on the internet. A very simple intention, but soon, I was surprised that so many people liked my work. About four months later, a publisher left a message on my blog and asked if I wanted to publish my work.”

To date she has published 25 books.

“To some degree,” she said, “[the] internet changed my life. Before my works attracted attention from publishers, while now they earn dashang (reward) from my fans. Web-writers now have more chance to become rich, if they have enough talent, effort and fans.”

And having fans is key, Xu reports. “According to a new remuneration system of China Reading Limited, the biggest internet literature website in China, web-writers can receive up to 50 percent subscription revenue sharing.” Bu Feiyan attracts legions of fans to her signings.

Most websites also include a “reward function,” which allows readers to award their favorite authors money or “props” which they can exchange for cash.

Some sites also encourage what is called “fan economy” through monthly rankings of popular web-writers, determined by readers’ votes. The wrinkle to this is that readers pay to vote, and the more they pay, the higher the ranking for their favorite author.

In fact, there are now so many web-writers in China (in the millions) that they are now “ranked,” both by their earnings and number of fans.

On the lowest level is the ordinary writer, also “known as poor guy (or poor guy writer).” They have a limited number of fans, and their work is seldom recommended to others. Their annual income is around 1,000 yuan.

One step further up the ladder are the dashen (super god) class of writers with earnings of more than 1 million yuan ($161,200) with fans counted in the millions as well.

At the very top of the tier are the 20-30 web writers known as platinum authors or zhigaoshen (the Supreme God) class of writers. The 2014 Chinese web-writers list ranks Tangjiasanshao first, with earnings of 50 million yuan (around $8.06 million) per year from royalties, while second and third on the list both raked in more than 25 million yuan ($4.03 million) each.

Of course, seeing the money that can be made, piracy and plagiarism has become a danger for web-authors. “Some readers pay to read the works but then share them with other internet users for free. Some writers ‘imitate’ the plot in ordinary writers’ works or mix different novel elements together into their own works.”

“So many people are engaged in online writing, but only a few do a good job. If you want to be a top commercial writer, you need talent as well as diligence. There is no shortcut to fame and fortune.”