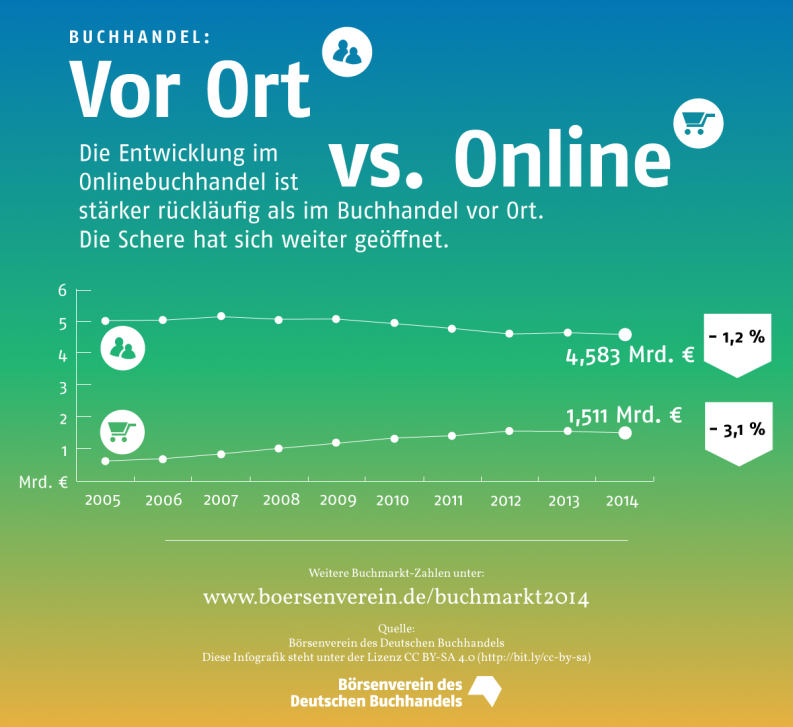 At the annual press conference on June 9th 2015, the German Publishers and Booksellers Association presented economic data and key statistics about the German book market in 2014, which, despite a slight decrease in overall sales, remained stable and even showed a few bright spots. Nonfiction sales jumped up by 5.4%, and brick-and-mortar bookstores gained market share over other retail channels.

Below are some additional key findings presented last week about the German book market:

Brick-and-mortar bookstores maintained better sales performance than online bookstores for the second year in a row and even gained a higher percentage of overall book sales (49.2% of book sales in 2014 compared to 48.6% in 2013). Online bookstores saw a significant decline of 3.1% in terms of market share (1.51 billion euros), as did stationary stores.

While fiction experienced a slow year, nonfiction was extremely successful: sales rose by 5.4% with the share of turnover shifting to 10.1 %, compared to 9.4% in 2014. This is due to a significant rise in the guidebooks and travel category.

Sales of fiction, traditionally the strongest category on the general market, dropped by 6.7% in 2014, the reason for this being the absence of major bestselling titles. The top 10 bestselling fiction titles generated 20.2% less turnover compared to the previous year.
German publishers, once known for the high numbers of new books they put on the market each year, have finally stared to cut back: the number of new books released last year sank from 81,919 in 2013 to 73,863 titles in 2014.

Rights and licenses sold remain stable: 6,443 licenses were sold worldwide in 2014 (by comparison, 2013 saw the sale of 6,466 German licenses). China came in first place as buyer of German books with 983 licenses, followed far behind by English-language titles in second place t 450 licenses. As always, children’s and young adult titles were most sought after with 2,362 licenses sold (36.7%), followed by fiction with 1,197 licenses (18.6%).

Chairman of the German Booksellers and Publishers Association, Heinrich Riethmüller, said: “It was a good year for us, even though those strong bestsellers were absent.” Alexander Skipis, Managing Director, added: “Germany is a nation of readers. As the second largest book industry in the world, the German market functions as a role model for both quality and diversity, and market performance is generally stable. We are eager to maintain and expand this state of affairs.”