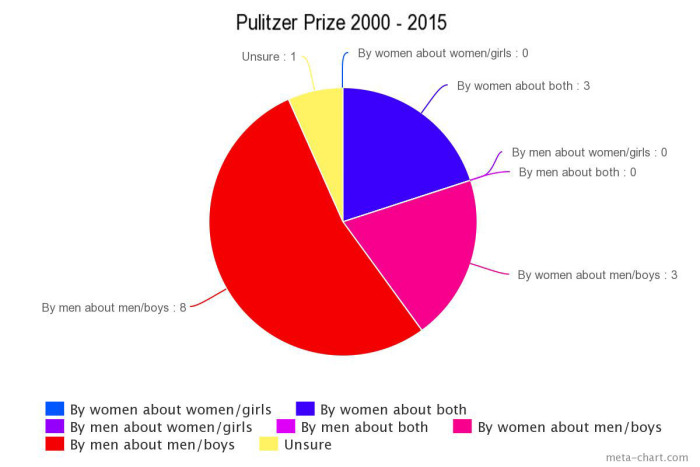 It’s rather amazing, considering that women are easily the most prolific readers and buyers of books, but as novelist Nicola Griffith reveals in a series of simple pie charts: books featuring women protagonists or about women rarely win the top book prizes. Writing about the Pulitzer, she points out:

At the top of the prestige ladder, for the Pulitzer Prize women wrote zero out of 15 prize-winning books wholly from the point of view of a woman or girl. Zero. For the prize that recognizes “the most distinguished fiction by an American author,” not a single book-length work from a woman’s perspective or about a woman was considered worthy. Women aren’t interesting, this result says. Women don’t count.

And she has even more revealing pie charts covering most of the top prizes, which reveal that the Pulitzer is not alone in it’s bias.

It’s hard to escape the conclusion that, when it comes to literary prizes, the more prestigious, influential and financially remunerative the award, the less likely the winner is to write about grown women. Either this means that women writers are self-censoring, or those who judge literary worthiness find women frightening, distasteful, or boring. Certainly the results argue for women’s perspectives being considered uninteresting or unworthy. Women seem to have literary cooties.