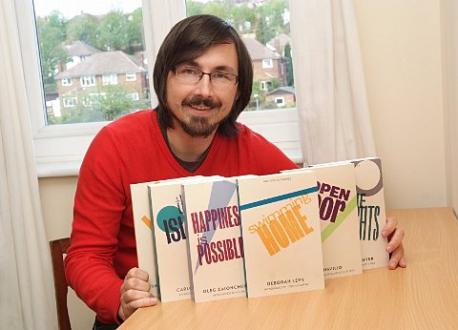 Publisher Stefan Tobler of And Other Stories in the UK has committed to a year of publishing only books by women, in response to “gender bias” towards men. Stefan Tobler, publisher of And Other Stories

In a recent issue of The Guardian, author Kamilia Shamsie called for a year of “publishing women to redress gender bias” in the literary world.

The gender bias is obvious: Less than 40% of the books submitted for the Booker prize over the last five years were written by women; more prize-winning novels feature male versus female lead characters, the status given to male authors and reviewers…the list goes on.

Shamsie wrote: “At this point, I’m going to assume that the only people who really doubt that there is a gender bias are those who stick with the idea that men are better writers and better critics. Enough. Across the board, enough…I would argue that it is time for everyone, male and female, to sign up to a concerted campaign to redress the inequality…Why not have a year of publishing women: 2018, the centenary of women over the age of 30 getting the vote in the UK, seems appropriate.”

And now, The Guardian reports, And Other Stories has become the first publisher to take Shamsie up on her challenge. “I think we can do it,” publisher Stefan Tobler told the Guardian’s Allison Flood. “And if we don’t do it, what is going to change?”

While And Other Stories is a small publisher, releasing just 10 to 12 new titles a year, as Tobler told the paper, “We’ve realized for a while that we’ve published more men than women. This year we’ve done seven books by men and four by women…We have a wide range of people helping us with our choices, and our editors are women…and yet somehow we still publish more books by men than women.”

Sophie Lewis, a senior editor at And Other Stories, said that while would initially involve rescheduling pub dates for male authors’ books and “digging harder” than usual to find “really good women’s writing,” the main goal she hopes to accomplish is “to examine the selection and promotion process, the production of their books from commissioning to reader’s bedside.”

“By taking on the challenge we will expose our systems and the paths of recommendation and investigation that brings books to us, and we will end up becoming a kind of small-scale model for a much bigger inquiry about why women’s writing is consistently sidelined or secondary, the poor cousin rather than the equal of men’s writing,” she told Flood.

Lewis wrote in the Independent:

“It’s time to ask why it is that our women editors and the many women translators and agents and publishers are urging us to publish men more often than women. Because it’s not just us – this is happening across the publishing industry. But why? Could it be to do with the way in which creative writing courses are being approached? Or going back further, literature classes at school? Through our acquisitions meetings and campaign planning – which will be solely focused on obtaining and promoting female writing – we’ll be able to examine these issues, and have a chance to better understand women’s routes to publication in so much more detail.”

Tobler added that he hoped that “other publishers would join in,” but literary agent Clare Alexander, who praised Shamsie for “purposefully being an agent provocateur,” thought it was doubtful that any of the UK’s larger publishers would take her up on her challenge.

Read the rest of the article here.