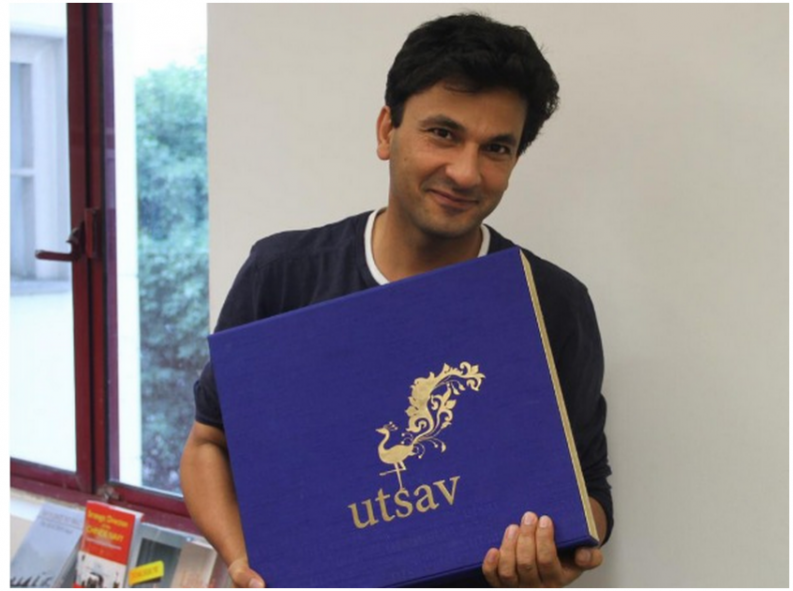 A new cookbook from Bloomsbury, printed with gold ink, was launched at Cannes. It’ll cost you $13,000.

Vikas Khanna is the author of numerous cookbooks, including Flavors First: An Indian Chef’s Journey and Bliss of Spices: The Essence of Indian Kitchen. He’s been named one of the sexiest men alive. He’s hosted television shows. But it’s his new book, Ustav – A Culinary Epic of Indian Festivals (Bloomsbury Publishing) that is sure to make headlines.

It is the first cookbook to be launched at the Cannes Film Festival. And it took the Michelin Star chef more than 12 years to research, write and photograph. But what’s sure to get people talking, according to Yahoo India, is the price tag: at 800,000 rupees or around $13,000, it’s the most expensive cookbook in the world.

The book, which runs 1,400 pages, is printed in “pure gold ink” and weighs 15kg. The first 15 copies will be signed by Indian Prime Minister Narenda Modi, to be hand-delivered by Khanna to the world’s top 12 leaders with “gratitude” for their “inspiration.”

As he told the Deccan Chronicle, “This book is a piece of art, my 21st book, one that reflects Indian heritage and culture and that’s why PM Modi has shown interest in the book.”

“I want Mr. Modi to sign those 12 books which will be given to the Queen of England, the White House…I want the book to be a gift from him,” he said. “I will make sure I will hand deliver them to the world leaders. The book will be launched worldwide on Diwali,” added the Amritsar-born chef.

The book is a celebration of India’s festivals — well-known and lesser known — looking at their rituals, ceremonies, and customs of food through sacred ingredients. And interestingly, he has dedicated the book to India’s transgender community.

“The journey of anything auspicious begins with transgender community singing and clapping at the doors of our homes, their blessings are like Mother’s love. It may be a wedding, child births, first Diwali, Holi or Lohri, it’s their voices that bring the celebration [to] the occasion. So, I dedicate this book to them and applaud them for their love and compassion in our nation,” he said at the launch.

The coffee table book will be sold at a lower price in India than in the States.