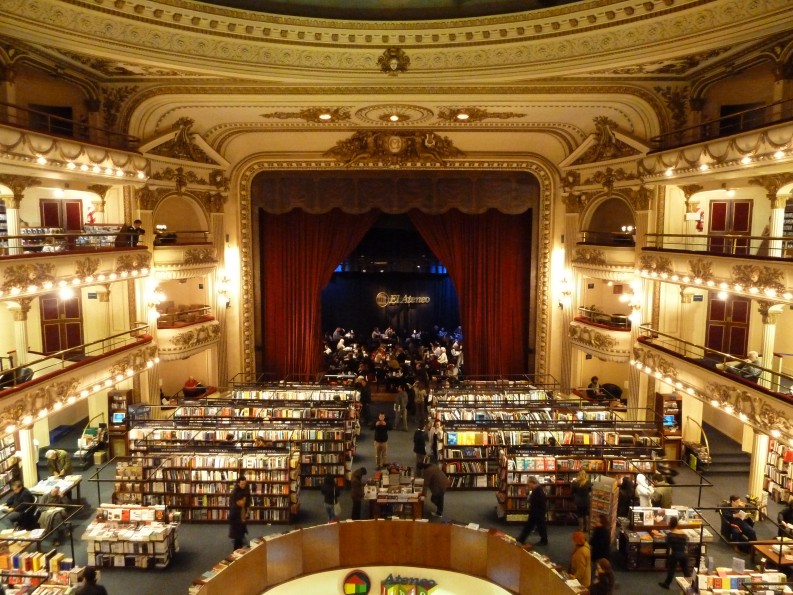 El Ateno Grand Splendid in Buenos Aires is widely considered one of the most beautiful bookstores in the world.

In the wake of the city’s highly successful annual book fair comes this piece of good news: According to a recent study by the World Cities Cultural Forum, Buenos Aires has more bookstores per capita than any other major city in the world.

The Associated Press reported that with a population of 2.8 million people (within the city limits), there are 25 bookstores (734 total at last count) for every 100,000 people. Its closest competition comes from Hong Kong, which has 22 bookstores per 100,000 people.

(In addition, according to the Argentine Book Chamber, there were 28,010 titles in circulation and 129 million books printed in Argentina during 2014, making it “one of the most prolific book printers in Latin America.)

Juan Pablo Marciani, manager of El Ateneo Gran Splendid, a bookstore in the well-to-do Recoleta neighborhood which draws 7,000 people in its doors every week told the AP that, “Books represent us like the tango. We have a culture very rooted in print.”

As Debora Ray wrote: “In buses and subways, in parks and cafes and even in malls, it is common to see people flipping pages of whodunits, histories and poetry, or most recently, new books about the mysterious death of prosecutor Alberto Nisman, a case that has rocked the country since he was found shot dead in his bathroom Jan. 18.”

The article cited 65-year-old Aida Cardozo, seen reading philosopher Santiago Kovadloff’s Las Huelllas del Rencor (Traces of Resentment), a look at the changes Argentine society has seen over the last 13 years: “I was born with paper books, and I’ll die with paper books,” she said. “Computers are for responding to emails and using Facebook, but not to read a novel.”

There are other factors at play as well besides a deeply ingrained cultural love of reading. There is no sales tax on books, and “heavy import taxes on books, and electronics such as e-readers, help keep the local printing industry strong.” In addition, Argentinians who use foreign retailers like Amazon pay a “35 percent surcharge on their peso-dominated credit cards,” and e-readers have struggled to find users.

And indeed it is.