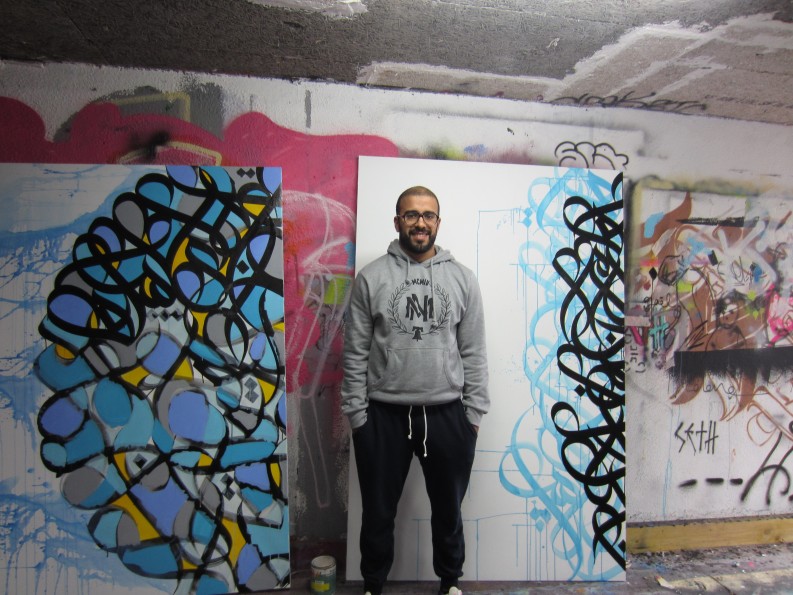 Franco-Tunisian street artist eL Seed, as depicted in his book “Lost Walls,” has found an audience by re-contextualizing the art of Arabic calligraphy.

“In the end, painting is simply a pretext to meet the other. The curves that I paint in the street are an invitation to passersby to talk and share,” writes Franco-Tunisian street artist eL Seed, in his book Lost Walls, a Calligraffiti journey through Tunisia. eL Seed, whose nom de plume was inspired by Pierre Corneille’s 17th-century play Le Cid, and the Arabic word el sayed, was born and raised in Paris by parents who had emigrated from Tunisia. He grew up speaking Tunisian Arabic but it wasn’t until he was 19 and examining the perplexing condition of being bi-cultural, that he took up studying literary Arabic in search of his identity. It was in the beauty of the curves of Arabic script and the poetry of the language that eL Seed slowly found his calling, first using it in street art in France, later in New York and Montreal.

He had always drawn as a child, but art classes were too expensive and it was not a field that was particularly acceptable to an immigrant family working hard to get ahead.

Armed with a business degree from a prestigious French institution, eL Seed was hired by a firm in New York in 2006.

“It kills you, but it helped me because I prayed to get out of this kind of work,” he said, referring to the corporate milieu. He began painting on weekends as relief from his relentless office work hours and eventually left the business world behind to concentrate on his painting. In 2007 social media was gaining importance and eL Seed said his work would not have had the same impact so quickly 20 years ago: social media played an important role in promoting his painting. (Today, the additional platforms of Instagram or YouTube provide street art with even more visibility.)

Developing a technique that New York art dealer Jeffrey Deitch coined in the 1980s as “Calligraffiti,” eL Seed was even closer to this concept than Deitch could have imagined at the time, because of the use of Arabic calligraphy in all his work, whether it was painting a verse from “At the Top of a Hill” by Brazilian poet Gabriela Torres Barbosa on a favela wall in Rio or a quotation by Nelson Mandela on a wall in Cape Town.

“At first, in Rio, people didn’t understand — they had never seen Arabic calligraphy before. Then when I explained, they were pleased,” said eL Seed. “In Cape Town they were intrigued. The fact that I paint in Arabic creates a dialogue, not a clash. It invites an opening. This is what makes this script magical.”

Although eL Seed had been on a search for his own identity, and certainly his book, which follows street art that he created throughout Tunisia is deeply personal; his work is determinedly universal as well.

“At first, there wasn’t a real thought process involved. Today, it’s a process of sharing. My messages are always sensitive to the local environment, but they all have a universal dimension to them.”

In 2013, when eL Seed was invited to paint the side of La Tour 13, an apartment building slated to be torn down which became the site for an ephemeral exhibition of international street art, he used a line from a poem by Baudelaire, ‘The shape of the city changes faster than people’s heart’, which he translated into Arabic.

“It almost sounded better in Arabic,” said eL Seed. “There’s dimension, power and beauty in Arabic, and a liberty and dynamic in the script that touches the eye before you even read what is written. When people tell me that they don’t understand what is written, I say you have to appreciate it like you would appreciate music in a foreign language — as a universal language.”

The catalyst for the Lost Walls project began following the 2012 riots at an art exhibition near Tunis, which Islamists deemed insulting. “This event sparked numerous debates concerning freedom of expression and the place of the artist in Tunisian society,” wrote eL Seed in Lost Walls. He asked the imam of the Jara mosque in Gabès, where his family is from, whether he could decorate the nearly 50-meter minaret. Several months later he painted a verse from the Koran on it, which he hoped was a message of tolerance and acceptance of others: “O mankind, we have created you from male and female, and have made you into people and tribes so that you may know each other.”

“I wanted to show the different facets of Tunisia,” said eL Seed, concerning his book. He painted on a white clay dome above a café on the island of Djerba, where he researched the Jewish and Berber communities, he decorated an ephemeral wall in Raf Raf, in northern Tunisia, and on a rock in the arid Tatouine village, which lent its name to a fictional planet in Star Wars.

Although street art became an important means of expression throughout the Arab Spring, eL Seed does not consider himself to be political and has no intention of being put in a box or being used for one cause or another. “Just because I am Tunisian and paint in Arabic, people like to put a label on me. I have absolutely no agenda,” he says. “I am here to bring people and communities together.”

In Dubai he has been experimenting with another medium, this time in 3D — sculptural calligraphy in fiberglass. Taking inspiration from a poem by Syrian poet Nizar Qabbani, which describes the beauty of a lover despite her age, eL Seed used the poem to declare his love for the art of ancient calligraphy.

Besides developing his sculpture and creating installations, he also writes poetry (in French) and enjoys writing in general.

After his challenging search for his identity, and the difficulty of learning Arabic, he sees the wealth in being multicultural. “Going back to my roots allowed me to be French as well. I understood this when I recently bought my football jersey for the French national team.”

eL Seed is appearing today at the Abu Dhabi International Book Fair, he will present his books and answer questions about his work. He was interviewed for the Fair’s Show Daily, which has granted permission to reprint the interview here.