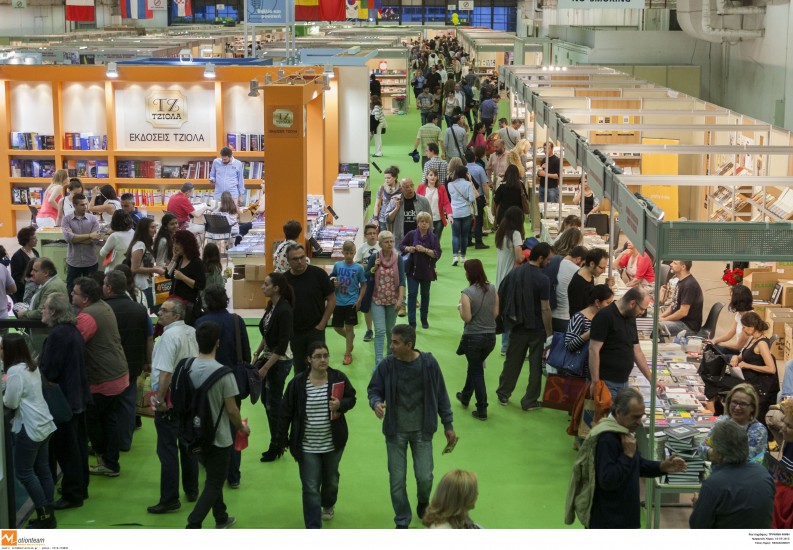 The 12th Thessaloniki Book Fair was a surprising success, though Greek publishers are frustrated with the lack of local support and international interest.

Nopi Chatzigeorgiou, coordinator for the 12th Thessaloniki International Book Fair, sounds both elated and relieved when she recounts the story behind the fair preparations for this year’s Fair. “It was only on March 18 the Hellenic Foundation for Culture was allocated the funding for the fair so that we could officially start the preparations. But with the Fair scheduled to start May 7, the undertaking seemed impossible back then,” she said. “Thankfully both the organizers and the participants achieved a little miracle this year.”

Periklis Douvitsas, publisher at Nefeli, one of Greece’s most respected literary publishing houses, agreed: “It is obvious that both the organizers and the Greek publishing world wanted this fair to succeed as they managed to organize it successfully in the space of 25 days.”

With around 400 exhibitors, a rich and varied program of 280 events spread over four days — and a large attendance — the 2015 Thessaloniki International Book Fair (7-10 May) was indeed a little miracle.

Vasilis Vardakas and Vlassis Maronitis, publishers of Key Books — a company founded just 18 months ago and is already surprisingly successful — are full of praise: “For us at Key Books, a non-traditional publishing house, it was a great opportunity to see how a traditional book fair looks and feels like. And to be honest it exceeded our expectations. From book binding workshops to social media seminars, the fair had a treat for anyone willing to explore its event-packed 4-day program. Also, it gave us the opportunity to showcase our work to the city’s creative community and meet interesting people from the art, graphic design and media scene.”

The sentiment was echoed by Anna Pataki, co-publisher at Patakis, one of Greece’s biggest and most respected publishing houses. “Having participated at the fair since 2003, I was very happy to confirm last week that the fair is truly an institution for the city: despite the difficulties, the visitors were there, actively participating in all events and meeting their favorite authors.”

And so, this fair has defied the most precarious predictions. Looking back, the prognosis was not good. Crippled by the closure of the National Book Centre of Greece (EKEVI) in January 2013, the ongoing economic crisis and the Ministry of Culture’s negligence, the Thessaloniki International Book Fair has been treading water for the last couple of years. Very few in the Greek publishing world believed that this year’s fair would take place, let alone prove a success. Crowds at the Thessaloniki Book Fair.

“Our sales were higher than last year,” says Popi Gana, publisher of Melani, one of Greece’s most respected boutique literary publishing houses. “The fair is important for us,” she continues, “as it gives us the opportunity to meet the readers of Northern Greece and visa-versa.”

“Even though this year for the first time we’ve had visitors telling us that they could not afford books, the turnover was higher than expected considering the general climate out there,“ confirms Periklis Douvitsas.

Christodoulos Yialouridis, the president of the Hellenic Foundation for Culture, says that the fair’s success this year “has acted as a cultural shield against the crisis. It has helped boost our confidence locally and will also help improve Greece’s image abroad at a time where only negative images of the country prevail.”

But can this year’s success alone guarantee the survival of the fair?

Nikos Argyris, publisher at historic publishing house, Ikaros, appears less optimistic. “Ikaros has been attending the Thessaloniki International Book Fair for almost 10 years now, and I personally have always been a strong supporter of the fair, which is the only one we have in Greece. However, in recent years, the fair has fallen out of the priorities of the Greek government, as a result of a general indifference towards culture and cultural policy. Add to this the recent financial crisis and austerity measures and what you get is a hot potato nobody wants to touch.”

“The international scope of the fair has been long lost,” he adds, “and many publishers hesitate to participate in a fair far away from their base, committing their limited resources and scarce staff. If we want the fair to continue to exist and play a role in the Greek publishing scene and the wider area, the state and policy makers need to re-examine their commitment. Otherwise, we can just call it a Greek book fair and move it to the capital, where 90% of the publishing industry is located.”

Nopi Chatzigeorgiou can only agree when I share Nikos Argyris’ thoughts with her. “It is time for the powers that be to be making decisions and to assume their responsibilities in order to guarantee the future of this important institution,” she says. “We need proper support and a steady structure. This year’s success has proven that Greek publishers love and support the fair and that the public continues to embrace it despite the difficulties. We all hope that this great opportunity will be seized so that the fair will continue to exist and realize its full potential in the future.”