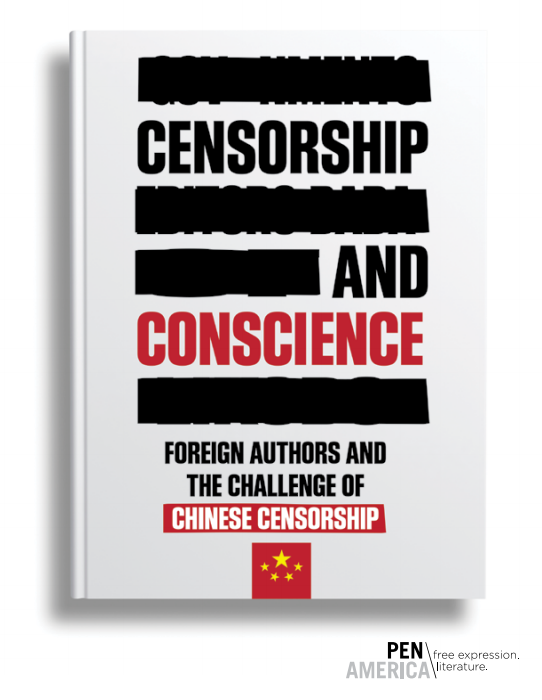 PEN America has issued a report on China’s book market entitled “Censorship and Conscience: Foreign Authors and the Challenge of Chinese Censorship.” For China’s turn as Market Focus at this year’s BookExpo America, PEN America has issued a report focusing on China’s fast-growing book market. Entitled Censorship and Conscience: Foreign Authors and the Challenge of Chinese Censorship, it explores an under-explored dimension of China’s massive censorship machine: the censorship of some of the thousands of international titles published annually in China.

Chinese demand for foreign books in translation is growing and has made China an increasingly important market for authors and publishers around the world. As book advances and royalties payments rise in China, more foreign authors will be drawn to the publishing market there. There are serious concerns about the kinds of compromises they may confront in the process, and the impact of these compromises on free expression. Yet little is known about the true scope of China’s censorship and the options available to foreign authors navigating the translation and publication process.

PEN’s research has found that in many instances, foreign authors – and their agents and publishers – do not have sufficient knowledge of the workings of Chinese censorship to do all they can to ensure that their books are not censored or to minimize censorship. Many have signed contracts that promise the preservation of the author’s original content but then leave the translation to the Chinese publisher and fail to vet the resulting copy, leaving their material vulnerable to undetected censorship. Some writers allow the details of their foreign rights agreements to be worked out by their agents or publishers, who may neither challenge cuts to the Chinese edition nor raise the matter with their client.

In many cases, the sensitive subject matter of books prevents them from even reaching the translation stage. Books like the S&M-themed Fifty Shades of Grey by E.L. James and American Dervish by Avad Akhtar have been licensed by Chinese publishers but have since had their contracts canceled or are now languishing in pre-publication limbo, out of recognition that their content will not pass muster with the censors. Nancy Wiese, vice president of subsidiary rights for Hachette Book Group, told PEN via email that American Dervish, which touches on Islam, extremism, and sexuality, “had been licensed but was canceled because the book was unable to pass the approval process.” Gray Tan, the founder of the Grayhawk Agency in Taiwan, sold the rights to Fifty Shades of Grey, but the Chinese publisher is still sitting on the book, unsure if it can ever be released in China.

Publishers who violate this censorship system face temporary business closure, permanent loss of their publishing license, and/or hefty fines. In June 2011, China forced state-run Zhuhai Publishing House to shut down after it published a memoir by Hong Kong newspaper publisher Jimmy Lai, an outspoken critic of the CCP.

According to Gray Tan, the big fear among Chinese publishers is that they will unknowingly be put on a government blacklist. ‘This means they will be watched more closely in the future,’ he said. No publishers in China are fully independent or free to publish what they wish. Even private publishers must find a state-approved partner in order to obtain the legally required International Standard Book Numbers, or ISBNs, that are only given to a limited number of state-run publishers. China’s State Administration of Press, Publication, Radio, Film, and Television controls the distribution in China of ISBNs, and publishers may see their supply cut dramatically if they publish controversial works. Such scrutiny and pressure could mean a slow commercial death for a publisher. These punishments are relatively rare because publishers are extremely careful. Publishing houses proactively excise sensitive words in, and sections of, books to avoid tripping the government censors’ wires.