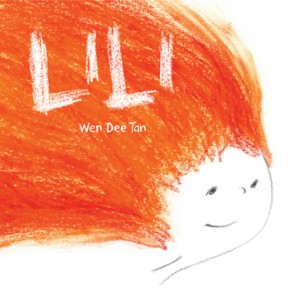 The book, Lili, which tells the story of a little girl who finds it hard to fit in due to her…hair was published by Fat Fox Books in February.

I had the chance to speak with Wen Dee at Sharjah about her career, her book, the project, and awards in general.

PP: Tell us about your career as an illustrator

Wen Dee: I have not been an illustrator for long, although I have always loved to draw for as long as I can remember. I previously worked for about 10 years as an IT consultant, before going back to school to study illustration. I graduated last year with an MA in Children’s Book Illustration from Cambridge School of Art, UK. My debut picture book Lili, where the winning illustrations were from, just got published by Fat Fox Books in the UK. I both wrote and illustrated the book, and it was actually one of my course projects. It also won third place in the Macmillan Prize 2013, an annual children’s book illustration competition organized by Macmillan Children’s Books.

Another book I illustrated (but did not write) is The Great Dragon Warrior, published by Epigram Books in Singapore in March 2015. A third book is due out later this year. I am currently concentrating on picture books, but would love to illustrate other types of books like fiction and books for older children. While I illustrate for other authors, I enjoy being both author and illustrator as it allows me to work on the interplay between word and image in a picture book. I also tend to tailor the illustration technique to what I think the story needs, so subsequent work may use different mediums and look different to Lili.

What were your inspirations for Lili and what was the process that went into creating the work?

I developed the work as part of my course. Being in an environment where you are encouraged and allowed the freedom to experiment and explore, I wanted to create something unique and hence the character Lili, a girl with fire for her hair, was born. The story and illustrations were very much character-driven. Very early on, I realized that the focus was her hair, and it was obvious that the illustrations had to reflect that. I decided to draw everything in a monochrome palette with just the red of her hair to draw the reader’s eye to her.

People have asked me what inspired the story. Did I know a redhead? What was the message I was trying to get across? Was the fire a metaphor for something? Every story that I have worked on is different. With Lili, it started with the character. A lot about the book is inspired; most of my ideas with this book came to me visually. I “see” the picture in my head, and I sketch it. How did it turn out to be a story about being ostracized? It was simply the nature of the character; someone who is this different is likely to have problems fitting in. It just worked out that way. Also, in my head, I knew Lili very well, and I knew how she would react given certain situations. So there was very little second-guessing as to whether she would react this way or that way.

What does winning the award mean for you? What were your impressions of Sharjah and the reading festival?

For someone who switched careers as I did, it is welcome confirmation that I am on the right track and that this is what I should be doing. I am now a full-time illustrator. I enjoy what I do, and honestly, I haven’t had so much fun.

I have been to the Bologna Children’s Book Fair a few times, and I thought Sharjah would be similar, albeit less well-known. But while Bologna is essentially a trade fair, Sharjah is definitely more geared towards children and is more accessible. It is very much a festival to celebrate children’s books, and children for that matter. Troops of children from schools visit the fair all week. (In contrast, Bologna is very much for adults). I had left early, but would very much like to have stayed on to attend the author talks that take place after that. It would have been meaningful to have events and discussion panels where authors and illustrators engage each other. There is also a very clear distinction made between author and illustrator at the fair, whereas nowadays, you increasingly find that the author and illustrator is the same person (for picture books and some books for older readers).

But what I like most about the fair is the opportunity to meet people from other parts of the world, with the same passion for children’s books as I do.