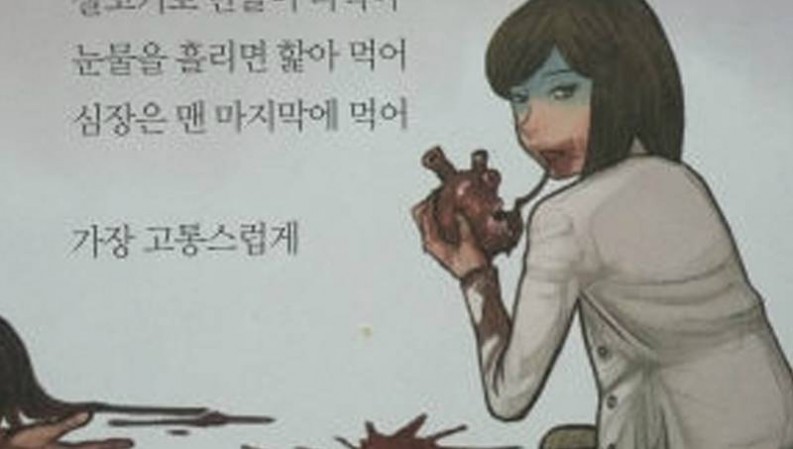 South Korean publisher Chulganil is recalling copies of a book of children’s writing that features a poem by a 10-year-old about matricide.

UPI reports that the South Korean publisher Chulganil is recalling copies of a book that features…particularly um……interesting poetry written by children, including one 10-year old’s paean to eating her own mother. Seriously.

The book, A Single Dog, was released on March 30 and quickly drew heated criticism for the content of some of the poems, including a 10-year-old girl’s poem about eating her mother, whimsically illustrated with artwork showing a girl taking a bite out of a human heart, all the while kneeling in a pool of blood next to a dead body.

The poem, written by a girl named Lee, is titled “On a Day You Don’t Want to Go to Hakwaon.”

Here’s the poem in its entirety:

When you don’t want to go to hakwon,
like this

Chew and eat your mom
Boil and eat her, bake and eat her
Spoon her eyeballs and eat them,
Pick out all of her teeth
Tear her hair out
Turn her into lean meat and eat as soup
If she sheds tears, lick them up
Eat her heart last

So it’s the most painful.

An official with Chulganil, Kim Suk Boon, attempted to defend the poetry book as “art,” issuing this statement:

“We would not have published this if it had been written by an adult writer for children. Because it’s a book in which young children write their own stories, we printed without modifications. We respected the writer’s intentions and judged that it had to be secured as art. Before we published it, we did say that readers might misunderstand the content in this poem, but the writer, Miss Lee, was very upset about this. We did not apply modifications even a little to any of the work loaded onto this collection of poems and the poems in here are frightening, but we are viewing them as art.”

But soon enough the company announced, after complaints from parents, that the books would be recalled and destroyed.

“After the holiday ends on May 6, starting from early in the morning, we will retrieve the collection of poems. The ones posted online will also be taken down as quickly as possible,” the company announced.

Curiously enough, Lee’s poem is NOT the only one in the collection to include an act of matricide. The poem “The Cannibal Doll” is all about a child whose mother is eaten by a “knife-wielding doll.”

I have no idea what to think about any of that.