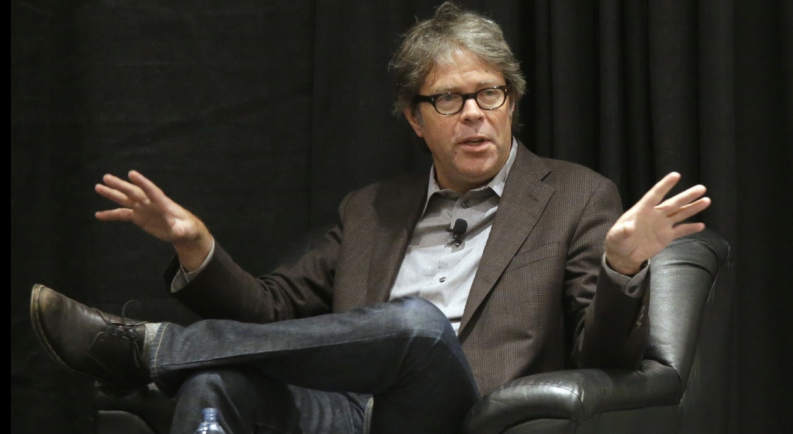 In a year that has had failed to produce a new superstar literary author, old standby Jonathan Franzen took the stage at BEA 2015 to fill the role.

In a year that has had failed to produce any new superstar literary authors, old stalwarts like Jonathan Franzen still draw big crowds and big interest. So, on Wednesday, May 27, BEA 2015 kicked off with a cerebral discussion between Salon co-founder and book critic Laura Miller and Franzen, whose new novel Purity is slated for publication by Farrar, Straus and Giroux this September.

Franzen, who fled the New York publishing community for the quieter shores of California, found himself once again firmly rooted in the publishing limelight with an at-capacity audience. He opened up to Miller about seeking familiar writing ground with younger characters, finding inspiration in charismatic strangers, the dread of encountering a book that’s been deemed “worthwhile,” and all kinds of other subjects that filled an hour.

Their conversation was decidedly “process heavy” with Miller guiding the discussion in that direction: How did he manage to write point of views of younger characters and understand their motives? How did he feel about plotting? Is he really a misanthrope?

“I wasn’t uncomfortable walking on stage, but I’m getting increasingly so,” he said at about the halfway mark. All joking aside, putting him on the spot yielded some provocative comments to mull over on the Javits floor this week as hundreds of competing book jackets flit across the collective radar.

“I think the situation for the writer is that it gets harder to write novels, not easier, as time goes by. And that has to do with using up the easy stuff. The stuff that’s very close to the surface.” So he had to dig a little deeper this time around.

“Are you the type of writer who discovers what you want to do during the process of doing it?” asked Miller.

“It helps to start with people who are unstable — anxious-making, or stressful people because then you know that there’s something underneath. There’s a problem, and people understand that.”

Purity is the given name of his 20-something protagonist who goes by Pip. Pip has problems that are seemingly common for the millennial set: piles of student debt, a toxic relationship with her mother, no father to speak of. “I don’t know why I came up with that title for the book. I kept thinking that I’d come up with a better one… Just the letters P-U-R, there’s something about them.”

The ready-made characters may have come fast and easy, but the magic in creating what he hopes to be a page-turner rested in finding devices to bring them to life, and to make them recognizable. “People aren’t generally as funny and well spoken in the real world as they are on the page. There are all these artificial things you’re doing to hopefully get away with it. There are always conventions.” For example, his protagonist’s mother is against TV, so that adds a depth of familiarity for an older group of readers. “In general you don’t have to know an entire generation; you just have to know a few,” said Franzen.

“In Africa I was on this route and there was another group led by this young South African man of Eastern German heritage. I just wanted to keep looking at him. There was this light in his eyes, and I was reminded that charisma really exists. There are people who command that attention. Your heart opens up even if you don’t know that person.”

“You make a plan and as soon as you try to write it you realize this is a bad plan. I wrote the first chapter pretty easily, and then I was stuck for about a year.” The next year was spent churning it out, a feat Miller observed was a rather quick push. “Just like any sales document, [a contract] has a certain kind of persuasion,” Franzen quipped. “I kind of reached for the ready-made stuff. I kind of had these German characters for a long time.”
“What were some surprises that you ended up writing — subjects, places you went?” asked Miller.

“There is a murder in the book, which isn’t really a spoiler. It’s going to be excerpted in The New Yorker next week,” said Franzen.

Perhaps it was the analytical weight of the whole conversation that sparked an equally heavy Q&A session. One young woman who was working on a paper about The Corrections for college asked him about his feelings about post 9/11 white male oppressors, or something along those lines. They’re not going anywhere, he conferred, after scratching his silvery head of hair. Another youngster in the back of the crowd of stood up and asked him how he managed to achieve a work/life balance so he wouldn’t end up like Hemingway. Laughs ensued, but Franzen’s answer was thoughtful. He’s lucky to be from a loyal family that instilled loyal values; indeed, his loyalty to FSG has paid off quite nicely, he observed.