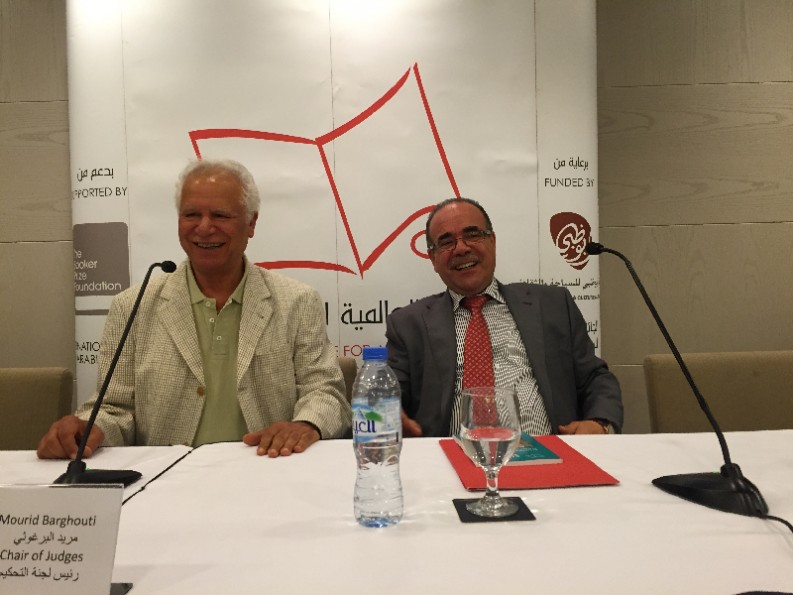 Winner of the International Prize for Arabic Fiction, Shukri Mabkhout, spoke of his inspiration in the Tunisian revolution and use of Modern Standard Arabic. It is the first time a Tunisian author has won the IPAF; Mabkhout had won the Golden Comar prize in Tunisia for his novel earlier this year. The shortlisted authors included Palestinian Atef Abu Saif for A Suspended Life, Lebanon’s Jana Elhassan for Floor 99, Sudan’s Hammour Ziada for The Longing of the Dervish, Syrian Lina Huyan Elhassan for Diamonds and Women, and Moroccan Ahmed El Madini for Willow Alley. Each author will receive $10,000, while the winner receives $50,000 and a guaranteed translation of his novel into English.

“You are a young author, you took so long to write this novel, what happened?” the IPAF Chair of the Panel of Judges, Yasir Suleiman joked with 53-year-old Mabkhout at the press conference following the prize ceremony.

“I didn’t choose the subject, it imposed itself on me,” answered Mabkhout, referring to the catalyst for his novel: the Tunisian revolution, which began in December 2010.

“The purpose [of the novel] is to show a generation of people who wanted to speak freely, to seek freedom from oppression, who wanted to have their own language, that differs from the common mainstream language,” said Mabkhout in the short, skillfully executed film about each shortlisted author that has defined the IPAF ceremonies from the start. “This is a novel of defiance…in defense of freedom…the great development of the Arab novel is proof that Arab consciousness is also evolving. We need to expose contradictions in society.”

In a local kerfuffle, however, Mabkhout’s novel was initially censored in the UAE but was for sale at the book fair, which the IPAF underlined in a statement: “While we understand that The Italian is not available for retail sale in the UAE, there will be copies available at the Abu Dhabi International Book Fair. As a Prize, we promote literature across borders but cannot influence the availability of our titles.”

Mabkhout said he did not have a problem with censorship, and that there is always pressure on those who create and wish to broaden horizons. “This vision is always narrower in more conservative societies. We live in a magnificent world in which there is Internet which cannot be censored, so it’s really a non-issue.”

Mabkhout’s novel follows the character Abdel Nasser (named “the Italian” for his good looks) over the second half of the 20th century — from the final years of Habib Bourguiba’s presidency to the beginning of Ben Ali’s, ending in the early 1990s when Islamists and left-wing parties are engaged in a power struggle. In it, Mabkhout, who equates novel writing with freedom of expression, addresses corruption and censorship and said that it was when he explored Tunisia’s recent history that he realized that there was a pattern, which made it all the more important to reflect deeply on contemporary events.

During the early post-revolution days in Tunisia, people were hungry for non-fiction and essays in order to understand the situation. “We needed to know what had happened and where we were going,” said Mabkhout. “But this was superficial. The complexity of recent Tunisian history, and a minute sociological analysis can only be expressed in a novel. Only narration can make sense of the events.”

Mabkhout’s literary language is described by Yasir Suleiman as a “standard Arabic that is full of vitality and pathos, thereby defying the unfair criticism that the Arabic language is a bookish and fossilized mode of expression at odds with the modern world. Mabkhout is not only a great narrator; he is also a master of an elevated language that breathes life into every word he pens.”

Mabkhout, who is president of Manouba University, studied literature and teaches Arabic. He said that there are misconceptions in the Arab world and in the Maghreb, in particular, about novels written in Arabic. “In Tunisia there are people who read in French and believe that novels written in Arabic do nothing for them. Others think that Arabic is too difficult, and can’t relay with ease what our lives are like today.”

Furthermore, he continued, “Arabs believe that Modern Standard Arabic stands in opposition to dialects. But this variety of dialects does not throw into question the Arabic language itself. Then, people think Arabic is the language of religion, but this isn’t true either. As a writer, one has to make an effort to make it a living language, one in which you can describe life today. Finally, in the Maghreb, there’s an ideological position that we must overcome: that modernity and universal values lie in the French language and that Arabic translates into a reactionary spirit. I believe that we Tunisians can only be modern via the Arabic language.”

Mabkhout’s next novel is about corruption within the world of football (soccer). The former fan remarked, “Football closely resembles society with all its conflicts, among which is corruption.”