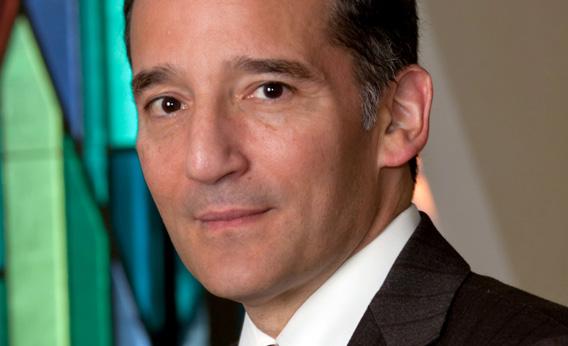 Beverly Hills rabbi David Wolpe seems tailor-made for stardom, but it took a book about a King David to convince Hollywood to call. I think the time is right for David because it’s really only been in the past twenty years — or less…like Sopranos and post-Sopranos — that people can believe in the heroism of truly flawed characters. Not like little flaws, but people who are really in some ways bad. But they can also be — like Breaking Bad — it’s like a confusion between what’s great and what’s not great, what’s heroic and what’s not heroic.

Rabbi Wolpe’s David began with a telephone call out of the blue from Steven Zipperstein, an editor with Yale University Press’s “Jewish Lives” series — the brainchild of financier/philanthropist Leon Black. Delights both published and forthcoming in this eminently accessible pantheon include, among others, Freud, Proust, Einstein, Oppenheimer, Groucho, Rothko, Bob Dylan and the Warner Brothers. To present a towering personage in a tidy 150-page essay demands an exquisite curation of the facts. With a three thousand-year-old story, a volume twice the size might have been half as demanding, Wolpe notes:

I tried to streamline it…this is my eighth book — none of them is 300 pages….I send out a weekly column — I have for twenty years — that’s two hundred words. Two hundred words — and no more. My sermons are never more than ten or fifteen minutes. I incline to brevity.

How much of the Biblical David (I and II Samuel, I Kings, I Chronicles) is “historical”?

We can’t know. Dialogue? Who knows if that was the “accurate” dialogue. Events? Even events — how could we prove that he had adultery with Bathsheba. We can guess whether the story is true, but we can’t know. The evidence for consists of primarily the idea that if you’re writing fiction about a Biblical hero you wouldn’t invent all these bad things — especially bad things that he didn’t do. As in, you wouldn’t say “You might think that David was responsible for the death of this person — but he wasn’t.” That’s a very convoluted way of creating a hero that you want people to admire by telling them he wasn’t really responsible for bad stuff they might assume he was responsible for. So I think probably a lot of it is historical but I can’t possibly know how much. No one can. Scholars make guesses, but we’re all in the dark.

In the introduction to David: The Divided Heart, the Rabbi notes that both the sources of David’s story and the size of his kingdom remain controversies: ” There was a considerable debate over whether David indeed existed. To this day it remains an uncomfortable fact that nothing unequivocal has been found that can be traced to his hand or identified with his rule.”

The first physical manifestation hinting at David’s existence did not present itself until 1993’s discovery of the now-famous “Tel Dan stele,” an archeological shard inscribed with “House of David.”

The inscription dates to some two centuries after David; the Rabbi reverse-engineers the logic: “It seems improbable, to say the least, that…a king…would identify himself [the shard’s inscriber] as having defeated an adversary from the house of a man who never existed.”

Further, “No contemporary chronicles have been discovered that mention David or Solomon, as would be expected in the case of a substantial kingdom. David was fortunate to flourish at a time when the two dominant powers in the area, Egypt and Assyria, were relatively dormant. The space probably allowed for no more than a small principality in a backwater land.”

But there’s the rub: “David throughout his life is ever capable of enlarging the image, seeing perspectives that a more blinkered view cannot imagine…When Jerusalem is a backwater, he will see it as a capitol; when worship in Israel is nomadic, he will envision a Temple.”

Objectivity about the subject isn’t what comes across in this book. Nor are readers subjected to any scholarly I-say-so eisegesis. Rabbi Wolpe’s tome incites fascination — if not awe. That soul-piercingly beautiful poetry is attributed to David is nice, but this character’s days and nights are steeped in intrigue, adultery, rape, incest, fratricide, regicide, wholesale slaughter — and cadaver-tampering. Cinematic?

I guess it is…Joseph Heller has a line that I actually didn’t put in the book but maybe I should have. He says that when Saul asked David to get all the foreskins from the Philistines that was when David realized they were more easily gotten from dead Philistines. [I Samuel 18:25 “Wherefore David arose and went, he and his men, and slew of the Philistines two hundred men; and David brought their foreskins, and they gave them in full tale to the king, that he might be the king’s son-in-law. And Saul gave him Michal his daughter to wife.”] That was very Joseph Heller. It is very cinematic and I suppose there is a way to do it that isn’t either gross — or obscene. But that’ll take some finesse.

The Rabbi captures the David paradox via a moment from Shimon Peres in the heat of debate “…with a religious member of the Knesset…‘I recognize the Torah of Moses our teacher and not the Torah of David our patriarch…Not everything King David did on land, or on roofs, appears to me to be Judaism.’” Later, he calls upon Joseph Heller’s David from the novel God Knows: “‘I’ve got the poetry and passion, savage violence and the plain raw civilizing grief of human heartbreak.’”

Destined for the Silver Screen

Without doubt, King David himself, fact or fancy, is big screen stuff. But anyone who remembers Gregory Peck’s David in 1951 or Richard Gere’s David in 1985 will certainly agree that while divine provenance and outsize antics and nation-building machinations are by nature “cinematic,” certain backlot miracles must be performed.

Here’s the sequence: I was sitting with Mike Karz [a Sinai Temple congregant since childhood] and we were watching his daughter perform in the Purim play. And he said, What’re you doing [these days]? And I said, I’m writing this book. And he said, Tell me about it. And I did. And he said, Send it to me. So I did. And then he called me and said, I sold it to Warner Brothers. I said, Nah, Get out — He said, No, really. So I went to Warner Brothers. I went to the first meeting and met Niija Kuykendall…Vice President of Production at Warner Brothers who bought the book — from Mike, who was, I guess, representing it — in a way. But the truth is, I mean, I said, Here’s my book. I didn’t, y’know — there was no contract, there was no — I didn’t really — I have a day job, so…I went to the meeting…We had a couple meetings with screenwriters…Nicholas Schoenfeld — a classicist…studied at Brown…a smart guy, clearly. He got the story…made a great presentation…

So you’re minding your business one day and the phone rings and it’s Yale offering a book deal; then, you’re poring over your galleys one day and the phone rings and it’s Warner Brothers offering a film rights deal? How does one get a phone to ring like that? Perhaps one might begin by getting onto the Jerusalem Post’s list of the “50 Most Influential Jews in the World.” Or, perhaps, Rabbi Wolpe’s “luck” comes from nothing more miraculous than spending a lifetime stabbing at and chasing after and hunting down and delving into the eternally mysterious in hopes of finding…something.

He claims, in closing, “The entire book is indeed, in Leonard Cohen’s words, ‘a broken hallelujah.’” (Famously, Mr. Cohen’s “Hallelujah” ran to eighty verses; his record label originally refused to release the album; but, by and by, his “Hallelujah” became one of the most covered tunes in music.) Rabbi Wolpe takes the long view on the movie’s prospects:

Obviously, the odds are still against it becoming a movie…The movie business is actually not a business I ever wanted to get involved in — other than like this, which is ideal: I get to see it happen…I hope it will happen. But if it doesn’t? Alright. It was still fun…I’ve read some screenplays…I don’t really know how to evaluate screenplays. It’s a different art. I can give you my impression, but I feel on much more solid ground reacting to a novel…I don’t have a visual imagination. I really have a “word” imagination… However this comes out, it will surprise me. I don’t “see” David in my mind’s eye the way visual people do…So what I’d want is for people to admire the fullness of a life that has cruelty — as well as sublimity…I would hope for the audience to be inspired, but inspired in a real way — that is, not with false ideals. I don’t know: that’s a hard thing to do. That requires a great performance and a great screenplay and, I don’t know…

I remember at the first meeting, Niija said to me…What do you think of as your role? And I interpreted that question as “How much of a nudnick are you going to be in this process?” So I said — both what I believed, but also what I thought would be the right answer, which is: My role is to help you make this as defensible as possible…

In other words, if they’re going to do something — like Ridley Scott just did with a boy playing God’s role — then I would be able to say to them, Look, it’s your movie. You can do what you want. I’m not the kind of person who would say, No you can’t possibly do that to my masterpiece of a book, but…If you do this, people are going to have a lot of objections to it in the…[very] community you’re trying to appeal to. So that’s my role: a sort of outside expert — because now it’s their story. Also, I don’t have pride of authorship…One of the things that I said after they bought the book was: “Look, now that we’re all settled and you bought the book and it’s yours, you are aware of the fact that you could open any drawer in any hotel room in America and read the same story, right?”…They laughed…

Every great character should be a mirror, don’t you think?