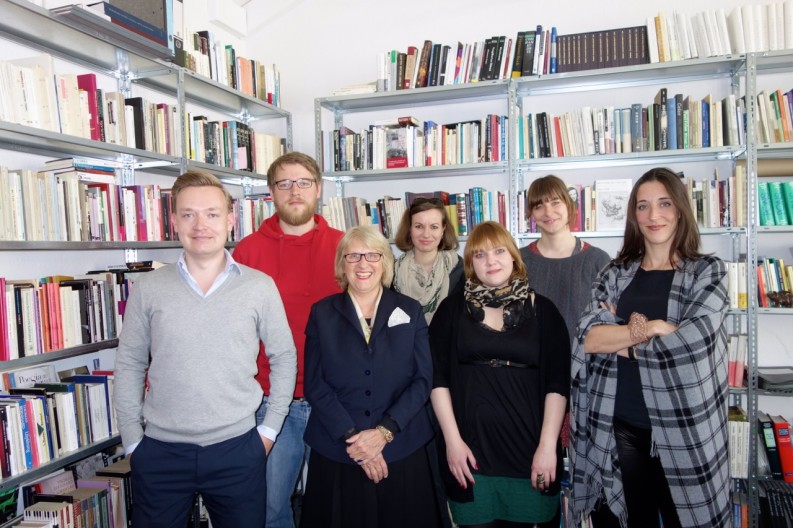 BERLIN: Over its 65-year history the rights department of Germany’s Suhrkamp Verlag has handled deals for nearly half a million contracts. “This is what we are doing daily, what we have been doing for successfully for 65 years,” says rights director Dr. Petra Hardt. “Today, we own rights covering 50,000 contracts, and we are constantly mining this deep backlist. This is the what has enabled us to survive on just trade and academic books — it’s a daily miracle really. But this is the character of independent publishing: constantly tilling the soil.”

Hardt, who is legendary in the rights business and has written her own guidebook, Rights: Buying Protecting, Selling (Seagull Books, 2011), oversees the sale of some 500 licenses for translation per year around the world. She estimates that the company has contact with around 1,200 customers for these licenses, which includes sales to film, television, and radio — “a huge area of earnings for us,” she notes.

The firm also clears all permissions by hand. “We use Klopotek’s system, and while the idea of automation is very tempting, it is not there yet. The ideal situation would be to have software that would allow you to lay out the contracts very clearly and to see the contracts from the clearest facts; to see, at the push of the button, that in France this year 120 contracts will expire on this date and whether or not the contract was earned out. But right now the software is only able to partially do that. At the moment we only get a monthly report.”

Despite the huge volume of contracts, Hardt emphasizes “Our core credo remains: every contract remains a single case and everyone is individual. This is how we work, on a one-to-one basis.” She adds that when asked to recommend a book to someone, “I am speechless. I only recommend an author to one publisher when I know them. That is one of the most important topics of our business: that we try to know everyone from our 1,200 customers around the world. I look at their program and capacity and the future, and only then can I recommend an author. The key is to know each other, nothing else.”

Suhrkamp keeps some 9,000 titles in print, of which 70% are German authors — and many of those are contemporary classics in German-language literature. These include Hermann Hesse, Bertolt Brecht, Herbert Marcuse, Theodor W. Adorno, Walter Benjamin, Thomas Berhnardt, Max Frisch and Peter Handke, among others. In fact, much of the company’s business is built on the backs of these literary giants. Fortunately, the company had the foresight to secure many of these contracts for the duration of copyright, rather than shorter-term deals. It is a practice that has supported other publishers as well, such as Gallimard in France (with whom Suhrkamp shares 60 authors) and Feltrinelli in Italy, which are seen as guardians of the literary patrimony for their respective nations.

Says Hardt, “our treasure is that 75% of our rights list is for the duration of copyright. The character of publishing for us is always for the long term. Five years in publishing is a day.”

Hardt still personally reviews each of the contracts covering the 450-plus trade titles Suhrkamp publishes each year (Suhrkamp also publishes some 50 academic titles each year). Of course, she does not manage such a demanding workload entirely alone. She’s supported by a team of nearly a dozen and, in particular, by Nora Mercurio, who is slated to take over Hardt’s role upon her retirement. That role is likely to include fostering many of the new German-language authors Suhrkamp has been adept at introducing to the canon, such as Lutz Seiler— whose novel Kruso won the 2014 German Book Prize — and Austrian author Clemens Setz (“I think he could win the Nobel Prize, says Mercurio). The rights department will is also handling growing areas of the business, such as the company’s line of 3,000-plus ebooks and Suhrkamp’s nascent line of literary nonfiction and narrative nonfiction titles, prompted in part by acquisitions of popular titles by Anglo-American authors.

Despite a deep and desirable backlist and strong contemporary program, things have not always gone smoothly for Suhrkamp. The company, which has long been known for the rainbow colored spines of its books (think of Penguin’s iconic orange series) — filed for insolvency in 2013, the end result of a management power struggle that saw many key figures leave the company and move from Frankfurt to Berlin. It turned the publisher into a headline story — for the wrong reasons. Still, Hardt — who started her career 35 years ago at Luchterhand working with authors that included Günter Grass — has persisted through the turmoil.

In some ways, Suhramp’s turn as tabloid fodder wasn’t so far removed from the experience of managing the rights business at the company. “These rights lists are very violent, volatile,” notes the younger Mercurio, “On a given day there are contracts that expire, others that renew, all this needs to be constantly managed. We need to be vigilant, always.”

To take one example, the works of Jürgen Habermas are published 40 languages. “In China we sell Habermas in runs of 1,000 to 3,000 copies for each work a year, and there are 28 main works. We discovered the Chinese market in 1995, and they have brilliant German literature departments there, so this is stable,” says Hardt. “But then circumstances change, and when an author like Hesse fell out of copyright in Asia, we lost the income to cover two employees…money we will have to pick up elsewhere. So in France we have convinced them to do more with Hesse, and this will offset the losses from Asia. We are doing this strategically and we do this kind of review once per month.”

Often, this involves developing an awareness of culture and politics in countries around the world, as it takes time to develop interest in an author in a particular marketplace. “In China, they might be interested in the complete works of Peter Hanke, which they are publishing there, but in Japan, they tend not to do our fiction and prefer our academic titles,” says Hardt. “Or,” adds Mercurio, who handles contracts for the English, Spanish and Portuguese markets, “you look at a country like Colombia, where the market is growing, and we can enter there because they already do a lot of French…or Brazil, which is just now starting to publish Adorno.”

And while Hardt sees Suhrkamp’s mission as securing the future reputation of their writers at home and abroad, she’s pragmatic when it comes to anticipating the volume of translations and the potential for sales.

“It is always written that the Americans don’t buy enough German literature, but I think that we sell enough,” she says. “Publishers from 140 languages send their books to Jonathan Galassi at FSG, so what can you do? It is impossible for him to do it all.  It is the same with the French and Italians — sometimes I need years to convince somebody to work on an edition. Or take the situation of when it does work. The former Arcade list is with Skyhorse. He tried to republish the best German titles from that list ,and he worked on The Wall and Other Stories by Jurek Becker…what he will sell? That is only one question. That does’t matter. The sales figures don’t matter. That isn’t the point at all. That is not what we look to get: we look to get translations.”

Sometimes, this even means creating your own market for translations, as was the case with India’s Seagull Books. “When they came to us and said they wanted to German translations in India, I thought they were very ambitious,” says Hardt. “But we helped convince the Goethe Institut to support them, and now they have 60 of our titles.” Or in the Arab world, where Suhrkamp works with Al-Kamel Velag. “[The Iraqi poet] Khalid Al-Maaly knows German very well and and wants to publish our books, so we let him, but often this means we don’t ask for an advance of more 200 euros, “says Hardt. “Why? Because we want to disseminate the content and the books and create new markets of readers.”

Just as often, this also means fostering new relationships with small, independent publishers in established markets. “We sold Kruso to Del Vecchio Editore in Italy after meeting with them at the Turin Book Fair, but we did so for a modest advance because they also want to do the short stories, poems, and essays,” says Hardt. “Or take Will Evans of Deep Vellum Press in Dallas, Texas. When he started, few people were willing to take the time meet with him, but we did, and now he is doing one of our books. These are the seeds we are sowing for the future.”

Though she comes closer to retirement with each passing year, Hardt is also always looking ahead. “My dream,” she says, “is to open more markets in Africa — South Africa, Ethiopia, Kenya, Senegal — but to do so in their native languages — Amahari, Kiswahili, Afrikaans. I want to be part of that creative project.”

As for the future managing rights, the final word goes to Hardt’s successor-in-waiting: “If you figure out what our core business is, if you really concentrate, it is easy to work,” remarks Mercurio. “What you are doing is buying, protecting, and then selling rights. We try to get the best possible terms and the major possibility to exploit subsidiary rights and work for the author. Then you protect these rights and make sure that these stay with you. Ensure there are no breaches of copyright and make sure that the author feels at home. We make sure they are as pleased as possible and as as cared for as possible. It all forms one circle and one thing in the end.”