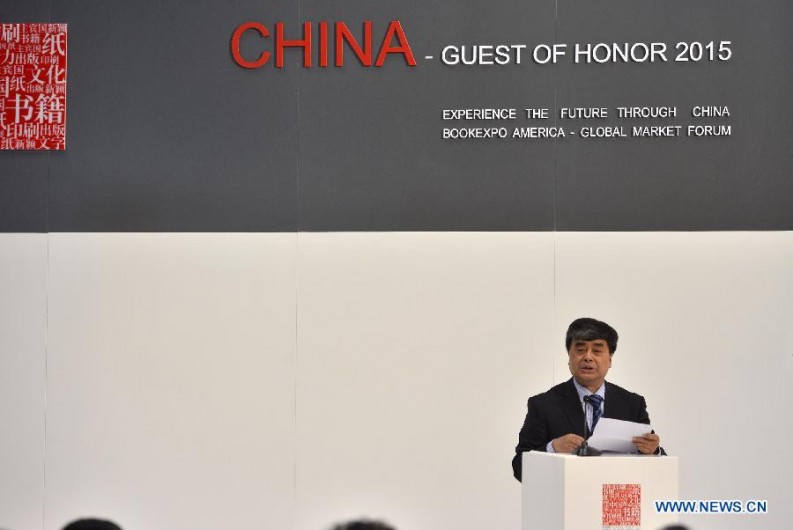 Walk through the sprawling Javits Center for BEA 2015 and you’ll be blinded by the huge floor space marked by the huge country that has taken the front-and-center stage as Market Focus of BEA 2015 — China. For the intimidation that it can throw off — expanses of Chinese titles, a formal tea ceremony, no bowls filled with Snickers or bookmarks — the chill fell away, somewhat, in the opening panel “Chinese-American Publishing & Media Industry Forum.” A panel was led by publishing consultant Ruediger Wischenbart, who specializes in surveying international culture and publishing markets. The opening address was given by Xiaoping Wu, who oversees Phoenix Publishing (one of the “Big 5” of China). “The world publishing industry is facing profound changes, and is greatly impacted by the high-tech industry,” he said. Statistics rolled off his tongue as if memorized. The numbers told the story of a country that is heavy on readers and tech consumers, but also one whose growth has slacked off in the last couple of years. “We have been able to obtain steady growth, but there is still a decline,” he warned, before launching into the positive terrain of his numbers.

Here’s his good news. There is an uptick in “cultural consumption” and a huge demand for paperbacks and other traditional reading material (newspapers and magazines). Fifty-eight percent of Chinese adults read books. Fifty-five percent read newspapers. Forty percent read articles. Fifty percent of adults are engaged in digital reading, representing an 8% increase over 2013. Not surprisingly, cell phones became the #1 Internet terminal.

So what did this mean for the rest of the panel? New technologies are ushering in new industries in Chinese publishing. In March 2013, China came up with an Internet+ Plan of Action which explored new fields of Internet growth: cyber bookstores, Internet publishers, and more. E-commerce is huge, but the rate of books going into translation is “slow and torturous, stilted and hard to follow.”

For Tom Allen, president and CEO of AAP, the tide has turned with China taking copyright more seriously. “Intellectual property is essential,” he remarked. “Six thousand copyrighted works came into China and only 1,000 copyrighted works went into the other direction.” Breaking through will continue to be a huge challenge for publishers. “You have to do a lot of work to breakthrough.” The market is ready, but there are lots of books competing with other books. “My impression, from what I hear from my members, is that marketing efforts by Chinese publishers in the United States would be well-advised.”

Richard Charkin, president of IPA, reminded the audience of the importance of science in Asia. He spoke of the scientific publishing market in China, which is too booming to ignore. “In the last decade, physics articles from China has increased from 10000 to 65,000.” Even more staggering is what that number represents in contrast to the US: “China publishes 10,000 more research papers a year than the United States—65,000 to our 55,000.” Richard Grandinetti of Amazon began his remarks with the following disclaimer. “China is an old country, and Amazon is a young company.” Contrary to the digital drum that one might assume he’d be beating, he’s still optimistic about print, especially the growing world of print-on-demand. “Print continues to grow alongside digital—the whole is greater than the sum of two parts.” That said, digital will, of course, continue to grow into the mainstay. “The transition happened very quickly. It went from very small to very big in a short amount of time. We didn’t have a lot of time to be prepared…Digital is the single largest expansion we will see in our time in the business.”

Grandinetti said that Amazon’s challenge has been to figure out how to get readers to choose books over gaming and video streaming, a challenge that is certainly mirrored in the United States. “We think of it as 8:00 on Tuesday night. How can we get books to take focus over streaming films and playing games?”

Another issue that looms large is piracy, but as he explains, the reason books are pirated is because they simply aren’t available. “We need to make them digitized so they can be available. Our mission at Kindle is Every Book Available in Every Country Available in 60 Seconds.” Another thing Amazon is watching closely with a sense of optimism is the relatively new subscription model. “We know that subscribers to Kindle Unlimited are reading 30-40% more than before they subscribed, but also that they’re spending more money, which is also encouraging.” Clay Stobaugh represented the Old Guard on the panel, as Wiley has had a presence in China since 1979. Wiley is acutely aware of the need for solid content, but also the need to continue training workforce development. They have an internship program that they use to amp up their “talent pipeline” and take their best practices back to China.

The road ahead is going to be difficult, and it will certainly need all hands on deck. The impact of China as the guests of honor of BEA will take some time to sort out. Will the bridges continue to strengthen? Who knows. As Wu said in his opening address, quoting Dickens, “It was the best of times, it was the worst of times. This is how publishers feel nowadays. But we don’t have another choice for going forward. We must take this opportunity and make growth.”