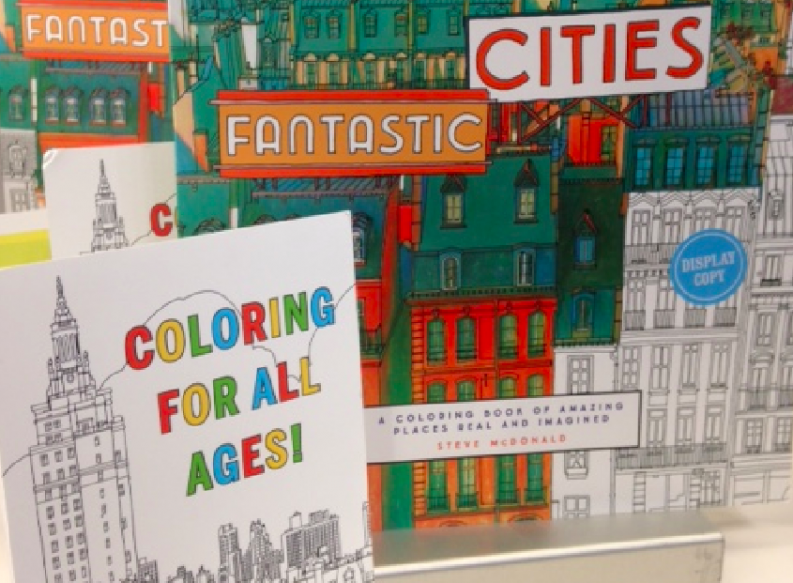 Chronicle Books promises its new “Cities” coloring book is “going to be huge.”

BookExpo America 2015 felt like even more of a marketing event with literature firmly pushed aside in favor of pure commerce. “Writer is pretty much the least impressive job to a child of seven,” joked Go the F*ck to Sleep author Adam Mansbach, during a panel discussion with fellow author/comedians Dave Barry and Alan Zweibel. “My seven-year-old looked at me and said, ‘So what, you’re a writer. So am I. I wrote three books this week.’ But I replied, ‘I’m a published writer…’ and ‘Big deal,’ said my child, ‘the publishing industry is collapsing.’

Walking around the halls of BookExpo America this year, you might wonder if the seven-year-old wasn’t on to something.

In what is a notably smaller book fair than a decade ago, the most impressive amount of floor space is occupied not by an American publisher — but by the China pavilion, one as austere and intimidating as the Great Wall itself. The Chinese presence was notable, in part for the fact that the hundreds of Chinese visitors appeared to have little or no intention of interacting with the broader book community. The Chinese constituency has thrown its own parties, hosted its own events, and held talks all largely focused and aimed firmly the Chinese community itself.

This is my 15th year attending BEA and the third time I have attended an international book fair where China has been the country of focus, including Frankfurt in 2009 and London in 2012, where the same pattern was initially established.

Of course, China is itself largely a self-contained, self-serving market, one that doesn’t need interaction with foreign or overseas publishers to survive. Their commitment and appearance at international book fairs largely seems to be a gesture towards cultural exchange, albeit one sorely lacking an articulate ambassador or two who can help guide the rest of the world in understanding.

Maybe the Chinese are right. Maybe it is time for the rest of the world to stop looking to the United States to offer it clues as to what books are going to be top global sellers around the world. After all, it has been years since we’ve seen a book or series of books become a true phenomenon. Perhaps the last two mega-selling series were Fifty Shades of Grey and the YA Divergent series. Both debuted in 2011. Today, look at the bestseller lists and what do you see? The same roster of names you’ve seen time and time again. That and…adult coloring books.

And it’s not just in the USA: look at England and, even, Brazil where coloring books also dominate the bestseller lists.

Is this the infantilization of American culture? Take Skyhorse Publishing — a company that once paid a half a million dollars to acquire the backlist of Arcade Publishing, which includes rights to works by Samuel Beckett, Elie Wiesel and Octavio Paz…What was their big announcement during BEA?

Grownups get out your crayons! Coloring is not just for kids. Like Play-Doh, ball pits, and hopscotch, coloring is an activity we tend to associate with children, but it can be an incredibly beneficial activity for adults. In fact, since the early 20th century, psychologists, including Carl Jüng, have preached the calming effects of the process.

Since 2013, coloring books targeted to adults have topped bestselling charts, selling more than 1.4 million copies in over twenty-two languages. Skyhorse’s four books, the only adult coloring books on the market with perforations, will allow budding artists to gift or display their beautiful creations! With a tremendous capacity to combat stress, it’s no surprise that adult coloring books have become the biggest trend!

Well, at least coloring books aren’t something you can do digitally. After all, you need colored pencils to scribble between the lines. For the time being, forget investing your money in publishing or media stocks. My advice: put your money in Faber Castell. All reports suggest that demand is skyrocketing for high quality colored pencils.

BookExpo America has largely been reduced to a marketing event for a combination of booksellers, book enthusiasts, the slowing dying professional book media, empowered bloggers and self-published authors soliciting traditional publishers. Streams of people continue to hoover up galley copies that go into free tote bags and line-up wide-eyed to get books signed by past-their-prime celebrities such as Newt Gingrich and Snookie.

Meanwhile America’s most dominant trade-publisher, Penguin Random House, is all but impossible to find on the show floor in their modest booth and the publishers of some of the top imaginative literary talent in North America, places like Bellevue Literary Press, City Lights, or Arsenal Pulp Press (to take just three examples, all part of the Consortium booth) cordoned off at the far dark end of the hall right next to the remainders.

If one is looking to see the direction the publishing industry is taking in the United States, one doesn’t need to look very hard — at least as far as BookExpo is concerned.

Consider this: if writing is an art form that should be used to edify, illuminate and otherwise advance the culture in some way, the fact that there are coloring books on the bestseller lists — shouldn’t that worry you just a little bit?