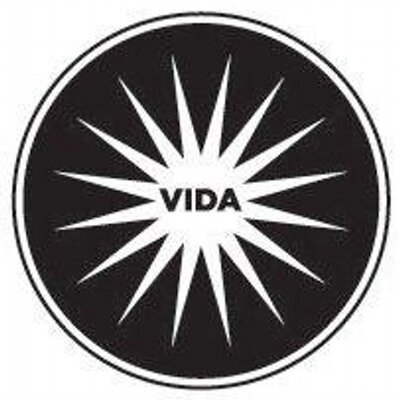 VIDA, the US organization that champions the role of women in literature, has issued its latest report and, after examining a wide range of publications including the New Yorker, the London Review of Books, the Times Literary Supplement and Granta, found that in 2014, as reported in The Guardian, “the majority still had heavily male-centered literary coverage, both in their use of reviewers and the books that were reviewed.”

This despite the fact that women in the UK purchase two thirds of all books sold.

The London Review of Books, for example, featured 527 male authors and critics in 2014, versus just 151 women (with 14 FEWER book reviews written by women than the year before). The New York Review of Books was not much better with a ratio of 677 men to 242 women. The New York Times Book Review featured 909 male contributors and authors overall, compared with 792 women. At the Nation the split was 469 to 193, and at Harper’s less than half the authors under review were women.

Even so, there were still some promising changes, as the article noted. Of the 15 major magazines Vida surveyed, 14 saw an increase in content by women over the past year. And…shoot off the fireworks, for the first time in “at least fifteen years, the New York Times Book Review had more female reviewers than male ones – an increase of 41 from the year before.”

The New Yorker had 17 more female contributors than it did in 2013, and McSweeney’s had an almost dead even split, featuring only two more men than women during 2014.

Erin Belieu, the co-founder of Vida, told The Guardian:

“Our goal has always been consciousness not quotas. Art doesn’t get made by quotas and some years it’s going to go forward, some years it’s going to slide back a little bit, but over time what we hope for is a shift in consciousness. We want editors, readers and writers to be aware of their habits and open their mind to other voices, and we at Vida do really think that is genuinely happening. And I would say overall we have seen a lot of positive trends over the duration of the five years we’ve compiled these figures.

“Absolutely there is still this gender bias inherent in literary magazines. We are talking about people who have done things a certain way for many years and literary magazines tend to be places where one vision gets put forward and even commissioning editors can get trapped in this culture. But generationally I think it is a problem that is going to be taking care of itself more and more. People under the age of 40 have been raised in an entirely different environment.”

The only major literary magazine with that had a majority of female contributors was Portland, Oregon’s Tin House. Its editor, Rob Spillman, had little patience for other editors who complain about the difficulty of achieving gender equality:

“It’s really interesting to see some of my fellow editors moan about how hard it is,” said Spillman. “It’s not actually that hard, you just have to pay attention. There really no excuses for not doing due diligence. There’s no point in throwing your hands up and saying you believe in gender equality, you actually have to go out and look for it.”