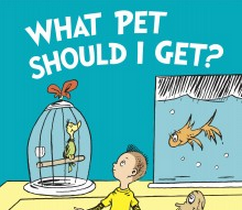 Random House Children’s Books will increase the first printing for previously undiscovered Dr. Seuss title “What Pet Should I Get?” to 1 million copies. Barbara Marcus, President and Publisher, Random House Children’s Books, has announced that it will increase the first printing for What Pet Should I Get?, the first new title from Dr. Seuss since 1990’s Oh, The Places You’ll Go!, to 1 million copies.

On February 18, RHCB announced the discovery of the original unpublished manuscript, and yesterday marked the official start of the 100-day countdown to the book’s publication.

The reaction from Dr. Seuss fans to the announcement of the discovery of the new manuscript was as excited as one might imagine. In the first 24 hours following the new, there were 122.5 million impressions on Twitter, and in the 24 hours following that, the number increased to over 200 million.

“We were absolutely overjoyed to see the response to What Pet Should I Get? from every corner of the book world – the bookselling community, media, educators, and readers nationwide,” said Marcus. “A new book by a publishing legend like Dr. Seuss is an extraordinary event, and we are delighted to announce an increased first printing to 1 million copies to match the incredible support and pre-orders we are seeing. We know that readers everywhere are eager to see this new and exciting book.”

Susan Brandt, President, Licensing and Marketing, Dr. Seuss Enterprise, L.P., added, “It’s an honor for us to carry on Ted’s legend with What Pet Should I Get? — a story that we know will be treasured by the very youngest to the oldest of Dr. Seuss fans. Ted loved and had pets himself, as a young boy on up through adulthood, and that makes the wonderful excitement and buzz for this new book all the more special.”

Listening Library will release an audio edition set of What Pet Should I Get? (narrator still to be announced), paired with One Fish Two Fish Red Fish Blue Fish narrated by David Hyde Pierce, simultaneously with the hardcover.